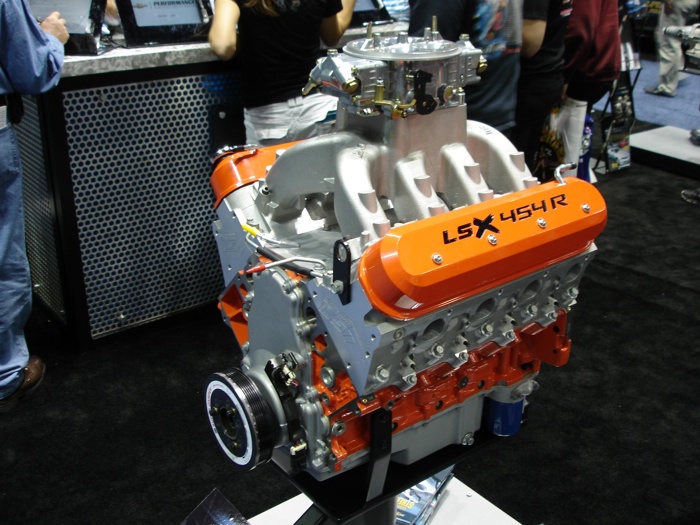 The V8 isn’t dead yet, but storm clouds are brewing on the horizon. Concerns over global warming, CO2 emissions and dependence on foreign oil led the EPA to mandate new Corporate Average Fuel Economy rules. To achieve 54.5 miles per gallon by 2025, automakers may abandon the V8 altogether or restricting it to a handful of limited production applications. 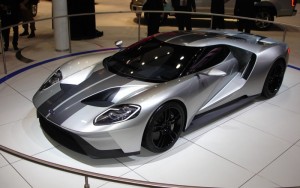 The history of the V8 is a story of ups and downs. Although Cadillac was the first U.S. automaker to mass produce a V8 engine back in 1914, much of the V8’s early popularity can be attributed to Henry Ford who introduced his flathead V8 back in 1932. Ford’s flathead V8 proved to be one of the most successful engines of all time, surpassed only by the small block Chevy.

By the 1950s and 1960s, the V8 was the engine of choice for most full-size American cars. The V8’s popularity peaked in the 1970s, with Cadillac offering one of the largest displacement V8s ever built at 500 cubic inches. Then the OPEC oil embargo hit. Gas prices soared and V8 sales took a nosedive.

The first era of downsizing had arrived, with automakers introducing new smaller cars and smaller engines through the 1980s. Many predicted then that the V8 was a gas-guzzling dinosaur that was doomed to extinction. But a funny thing happened on the way to the junkyard. The V8 didn’t go away. Although the 1980s were certainly a lackluster era in terms of performance, the V8 limped along as a detuned shadow of its former self. But gradually things began to improve. The introduction of fuel injection in the middle to late 1980s provided much needed life support for the V8, and helped it regain some of its former status.

The V8 isn’t dead yet, but storm clouds are brewing on the horizon that may endanger its long-term viability. Concerns over global warming, CO2 emissions and dependence on foreign oil led the EPA to mandate new Corporate Average Fuel Economy (CAFE) rules that nearly double current fuel economy requirements. Automakers will have to achieve an average fleet-wide CAFE rating of 54.5 miles per gallon by 2025. Achieving these kind of numbers may require abandoning the V8 altogether or restricting it to a handful of limited production applications. 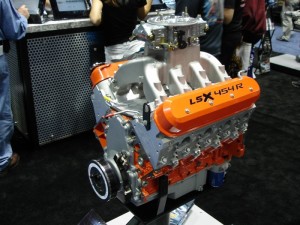 Numbers don’t lie. The number of V8s produced by U.S. automakers has been steadily declining over the past decade. In 2005, 28 percent of cars and trucks built in North America were powered by V8 engines. Ten years later, the percentage of vehicles equipped with V8s has dropped to 14 percent. That’s half the percentage of V8s that were built a decade ago. Four-cylinder engines now account for about 54 percent of all engines produced, while V6 engines account for the remaining 32 percent.

The changing mix of engine types will obviously impact engine builders down the road, especially those who are production engine rebuilders who rely on traditional V8s as a significant portion of their business. But the decline in the V8 numbers should have much less short-term impact on shops that focus primarily on traditional V8 performance work.

Although the V8 will hopefully remain the engine of choice for powering certain full-size cars, trucks and SUVs, there’s no guarantee as to how much longer the V8 will continue as a standard or optional engine as new models are introduced. To achieve an average of 54.5 mpg by 2025, automakers will have to build lighter, smaller, more fuel-efficient vehicles with each successive model year. Hybrids and electric vehicles help boost CAFE numbers significantly, but the numbers are still relatively small (less than 3 percent of new vehicle sales).

The next generation Lincoln Continental will also have a V6 engine instead of a V8, and Cadillac has discontinued V8s in some of its models, replacing them with turbocharged V6 or four-cylinder engines.

Many engines today are considerably smaller than the engines they have replaced. One of the engine options Ford offers in its Fusion models is a 1.5L Ecoboost four cylinder. It also offers a tiny 1.0L three-cylinder Ecoboost engine in the Focus. These engines are smaller than the old air-cooled 1600 cc VW Beetle engines of the 1970s, which barely made 50 hp. Yet the Ford 1.5L Ecoboost four makes 150 to 180 hp (depending on the model year), which is three times the power output of the old VW engines. Even the 1.0L three-cylinder Ecoboost beats the old VW engines by producing 118 to 138 hp (depending on the version). The point is, today’s downsized engines are capable of delivering a lot more horsepower per liter than the engines of the past. 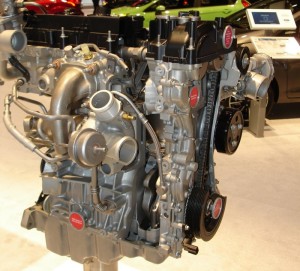 Whether the V8 disappears at the OEM level or not, the market for performance V8 work shows no signs of fading.

During World War II, Ford produced a monster V8 engine for powering Sherman Tanks. The “GAA” engine was a 60 degree V8 with overhead cams, 4 valves per cylinder, huge 5.4 inch cylinder bores and a massive 6.0 inch stroke. Total displacement was 1,100 cubic inches, which is similar to some of today’s big bore ProStock Monster blocks. It also weighed over 1,400 lbs.! But the Ford tank motor was only rated at 500 horsepower, a number that can be easily achieved today in a small block Chevy with traditional performance modifications. Bolt on a power adder like a blower, turbo or nitrous oxide and the power potential of a V8, V6 or even four-cylinder engine becomes even greater. Consequently, it doesn’t take a lot of cubic inches today or a V8 to make some serious horsepower.

Chrysler has been using the same approach on some of its late model Hemi engines. Cylinder deactivation works well on pushrod V8s and is less expensive than downsizing to a smaller turbocharged engine. A turbo and intercooler add a lot of cost to an engine, so for now Chevrolet and Chrysler are finding it more economical to stick with the V8 in certain models. But no one can say how much longer that approach will continue.

Ford and GM are both working on next generation 9-speed and 10-speed transmissions, and both will likely be using more aluminum and composite materials to reduce the weight of future models. The aluminum body Ford F-150 is about 700 lbs. lighter than the model it replaced, allowing the smaller V6 engines to deliver V8-like performance, hauling and towing capabilities.

As far as the aftermarket and the racing industry is concerned, the V8 is still king and will remain the king for the foreseeable future. Although the availability of V8 engines in future production vehicles will continue to decline with each successive model year, the V8 remains the engine of choice for almost every racing venue from drag racing to circle track to street to you-name-it.

The Detroit automakers are helping keep the V8 on top with the latest horsepower wars. When Chrysler introduced the 707 hp 6.2L Challenger Hellcat, they essentially challenged the other automakers to top them. Ford is responding with a 750 hp version of the Shelby Mustang and Chevrolet is cranking up the power on its Z06 Corvette and 2016 Camaro. Performance companies like Roush, Saleen, Shelby and others are also coming out with 700-plus horsepower versions of their own nameplates. How much higher the Detroit automakers and others will go with production street vehicles is anybody’s guess. Eight hundred horsepower is not an unrealistic number for some of these cars. 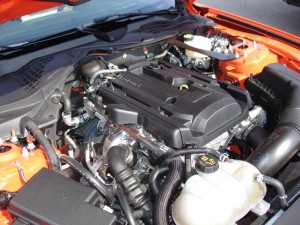 The much-touted sport compact market that emerged in the past decade really hasn’t grown the way many people initially thought it would. The millennial generation who likes their turbocharged Subarus, Hondas, Toyotas and Mitsubishis aren’t spending the kind of money on their four bangers like the baby boomers have on their classic muscle cars, street rods, Corvettes, Mustangs, Challengers and Chargers. Most of the upgrades that are being made on sport compacts are induction systems and exhaust bolt-ons like bigger turbos, nitrous and low-restriction exhausts.

Sport compact remains a niche market. There are a few aftermarket blocks and heads available for upgrading sport compact engines, but nothing like what’s available for Chevy, Ford, Chrysler and Pontiac V8s. There are also some serious sport compact drag racers, drifters and rally racers who spend big bucks on their motors, but their numbers are nothing compared to what’s being spent on traditional V8s by Saturday night dirt track and asphalt racers, drag racers, street performance enthusiasts, hot rodders, muscle car restorers, off-road racers, truck pullers, boaters and others.

Most of the four-cylinder classes that run at Saturday night dirt track events are for entry-level racers who want to have some fun without spending much money. Rules typically don’t allow any serious engine modifications, so these classes are no threat whatsoever to the dominance of the V8 on dirt tracks.

Although V8 engines will become less common in late model production vehicles, the demand for traditional V8 machine shop work shows no signs of slowing. The performance market is strong and continues to recover along with the overall economy. Relatively low fuel prices compared to a few years ago leaves more discretionary income for people to spend on their toys and project cars. Sales of most traditional performance parts such as camshafts, lifters, rocker arms, valve springs, pistons, rods, stroker cranks, aftermarket cylinder heads, blocks, intake and exhaust manifolds, carburetors, fuel injection systems and so on are all much improved over where they were during the recession.

Based on these survey results, it appears the number of V8s being rebuilt has declined, but that the volume of engine work overall is growing and should continue to grow barring another recession.

Whether the V8 disappears at the OEM level or not, the market for performance V8 work shows no signs of fading, and should continue to be strong and growing. Aftermarket parts suppliers continue to develop new heads, blocks, cams, valvetrain components, pistons, rods, and cranks for V8s, to expand the availability of such parts for current generation V8s (Chevy LS, Ford modular and Coyote engines, and Chrysler Hemi) as well as older vintage V8s (Pontiacs, Olds, Buick and Cadillac). So fear not, the V8 should remain the mainstay of the performance aftermarket for years to come.

Advertisement
In this article:Downsizing Engines, V8s