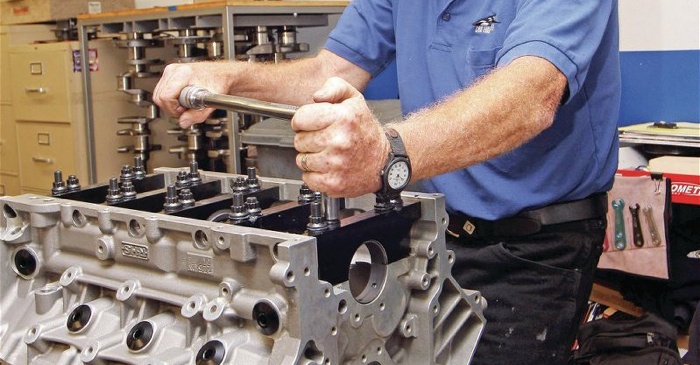 As we move through our 51st year of covering this industry, the staff of Engine Builder recognizes that old adage – the more things change, the more they stay the same.

What’s changed about this industry is, well, pretty much everything. What’s stayed the same is the dedication and hardwork of the professionals who keep engines running and customers happy.

For more than 30 years, we have surveyed the same machine shop/custom engine rebuilder (CER) population to get a snapshot of this industry from the experts – engine rebuilders. The information in this study, we believe is an accurate and reliable barometer for tracking trends in the production of engines, cylinder heads and crankshafts, as well as specific business data. Other national reports back up our basic analysis and we thank every one of our survey respondents for taking the time to contribute to this report.

The data generated for this year’s Machine Shop Market Profile was collected through survey questionnaires sent to a random sample of Engine Builder subscribers as well as the machine shop/custom engine rebuilding membership of the Engine Builders Association (AERA). Our questionnaire, sent via the U.S. Mail, email and fax, was developed to obtain the information contained in our profile. In all, we heard from more than 230 locations that are performing machine work and building engines in the U.S. Analysis of the data was completed by Babcox Market Research.

The survey information reflects data for production year 2014. As in years past, we asked multiple questions about readers’ monthly production of engine blocks and cylinder heads, broken out by engine size as well as by gas and diesel configurations, crankshafts, core sourcing, shop equipment ownership and purchasing, and total production time spent in specific engine building areas.

In addition, this report includes information on the typical shop’s financial data, size of shop, years in business, equipment and employee information and customer-base analysis of the typical CER. We encourage you to use these averages to see how your business compares. A complete copy of the charts used to generate this article is available on EngineBuilderMag.com or by contacting Babcox Market Research at 330-670-1234

Nationally, the numbers look like this: the average machine shop produced nearly 24.4 gas and diesel engines monthly last year, up from 22.4 in 2013. To all the naysayers out there, this is the continuation of a positive trend – it’s the highest number we’ve seen in at least seven years – and the credit again goes to the smallest member of the family for carrying the weight. While declines were seen in six-cylinder gasoline engines (down an engine per month in 2014), four-cylinder gas engine production increased 1.3 engines per month (up to 7.6 per month from 6.3 per month in 2013). Add to that significant increases in the number of eight-cylinder and “other” engines, and you see that gas engine production is higher than at any time since at least 2008.

Diesel has stayed strong.  Increases were again seen across the board and the diesel engine segment experienced another great year last year. Continued growth of four-and eight-cylinder engines indicates that industrial, commercial and agricultural opportunities remain. Overall, the number of diesel engines held steady at 3.3 engines per month.

The average national monthly gas and diesel engine production of 24.4 units translates to 292 engines produced annually. This is up from the 269 reported last year. Projected onto a universe of 3,000 to 5,000 full-service machine shops, it’s estimated that CERs accounted for between 879,000 to 1.46 million gas and diesel engines built during production year 2014. Last year, the market range for the same size universe was 807,000 to 1.35 million units.

At an average retail cost of approximately $2,600 per engine, we calculate that the total rebuilt/remanufactured engine market generated between $3.46 billion and $4.97 billion in rebuilt engine sales in 2014.

Despite its age, the small block Chevy 350 continues its stranglehold on the industry – though other engines in the GM family (without question the LS platform) are gaining traction. The 350 is ranked as the No. 1 engine built by 44 percent of our respondents, about even with last year. However, a GM engine of some kind is listed No. 1 by 71 percent of our respondents. Fords account for 12 percent; Heavy-Duty and Commercial engines account for 14 percent (another increase from last year); and “other engines” saw a big drop to 2.3 percent. Neither imports nor Chryslers were ranked as a No. 1 engine, though imports do make up a larger percentage of total engines rebuilt than has been seen recently.

Gas cylinder heads – which for years had been an increasingly bright spot for the typical shop’s production – last year saw a decline in monthly production numbers to 36.9 heads per month in 2013. This survey shows that downturn was reversed. In 2014, 40 gas heads were produced each month and more than 11 diesel heads were rebuilt per month. Gas cylinder heads accounted for about 46 percent of the typical shop’s production in 2014, down from 48.9 percent. Cylinder head work remains the single biggest part, but complete engines and heads together account for 63 percent of the typical rebuilding business – this is down slightly from 64 percent calculated in 2013.

For diesel engine builders, a slight decline was seen in crank and block production in 2014, exactly the opposite of last year’s report, in which short blocks, long blocks and complete engine production numbers saw a drop. Those numbers rebounded slightly this year.

But while diesel cylinder head increases were seen in most sizes, it was complete engines that made the biggest impact overall. In 2013, shops produced an average total of 46.5 gas and diesel heads per month, but in 2014 that number was 51.2 heads produced monthly

Again, diversity reigns in today’s shop environment and that means shops continue to do an increasing amount of various types of engine builds and engine machine work in a variety of engine markets. CERs today are more and more capable of doing everything from a single cylinder gas or diesel slugger to a 16-cylinder marine, industrial or off-road engine to a high performance street rod or racing engine.

Shop owners tell the Engine Builder staff that engine technology changes mean they  need to work hard to keep up with their education and their abilities. In many cases, equipment can do the work more consistently and precisely than could be achieved by human hands. Modern equipment allows them to supply their engine machine work or engine builds faster, cheaper and at consistent levels.

Some outsiders may question the wisdom of replacing equipment that seems to be perfectly fine – wouldn’t those dollars be better served in the owner’s bank account? From CNC software designed exclusively for the engine building industry to shop tooling and equipment built to make your job easier and more profitable, what those dollars equate to isn’t a cost – it’s an investment in training, technical resources and relationships with suppliers that allows shops to become the known experts in their fields. Customers seek them out for all of these reasons.

Nearly 17 percent of shop owners indicate they have been in business 10 years or less and another 25 percent would still not be considered “legal” (at least, they couldn’t rent a car) because they haven’t even turned 20! At the other end of the scale, 37 percent of the shops have been in operation for more than 30 years. Declines were seen in the oldest engine builder demographic and while we support and appreciate our veterans’ leadership, we prefer to think that we’re seeing an example of great succession planning. Younger employees are taking over successful operations and putting their own stamp on them.

Other facts from our survey:

• 31.4 percent of shops say they have a dedicated shop foreman; 87 percent of these foremen are also working machinists.

• Average hourly labor rate (nationally) is $95, an increase of $22.50 per hour from a year ago. Do we believe that all shops have suddenly decided that their time really is valuable and they need to be paid accordingly? While not being naïve, we do feel that shops continue to recognize the investment in talented employees and top-notch equipment and customers are learning that you really do get what you pay for. The average markup on hourly shop labor (that is, the markup from hourly shop labor rate paid to employees compared to the hourly rate charged to customers) is 150 percent. And for every dollar in shop labor billed in 2013, $6.55 in shop labor was generated.

Computers – love ‘em or hate ‘em – are a necessary part of business today, and even this industry is finally recognizing that fact. Half of respondents (the same percentage as last year) say they use a computer to manage their shop; thankfully, nearly twice as many this year as last admit they’re in the process of computerizing (over 13 percent); yet a still surprising 37 percent of shops insist on doing business the old fashioned way.

Shop websites – used in absolutely every kind of business to great financial success – are found at just 44 percent of shop respondents. Of those, 42 percent sell directly via their website or other online method. But sales aren’t the prime motivation for web-enabled shops. Nearly 90 percent of shops with computers or other connected devices use supplier websites to research or purchase product for their business.

It used to be easy to identify your competitor – it was the shop across the street, around the corner or across town. Today? You have to think a little broader.

We asked shops to name their toughest competitor and here’s what they said.

50 percent – the economy in general;

11.3 percent – customers purchasing engines from retail outlets, whether PER engines or other suppliers;

7.7 percent – low finance rates on new or used cars; and

Nearly half of our respondents say high performance is the most profitable segment of their business these days. Restoration is next (20.1 percent), followed by last years champion, Heavy-Duty Diesel (11.9 percent). Industrial (7.7 percent), small engine (5.2 percent) marine (4.6 percent) and diesel automotive (2.6 percent) round out the field.

Shops say they will continue to do what it takes to be strong and successful in this business, but that doesn’t just mean surviving. More than 37 percent of respondents say they plan to expand their engine rebuilding operation in the next two years. This will be accomplished in these following ways:

• 22 percent will expand their production area;

For an expanded version of this report as well as the charts used to formulate this article, visit
www.EngineBuilderMag.com.