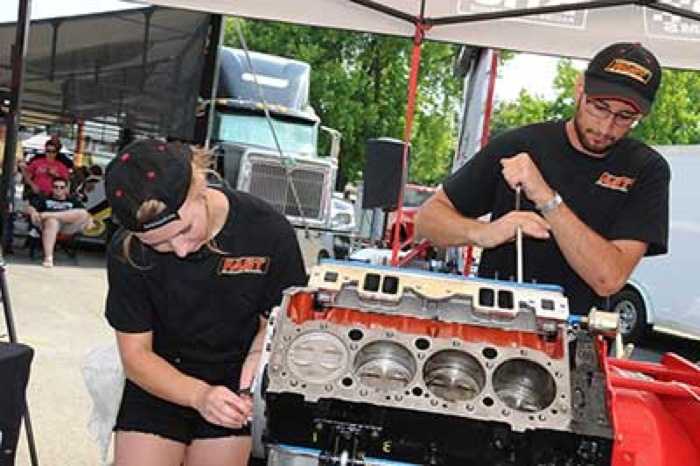 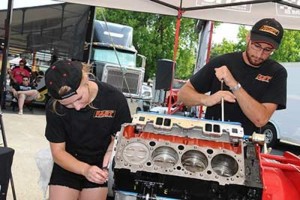 Some of the nation’s best engine builders participate in the popular COMP Cams Engine Builder Duel. During the Du Quoin Street Machine Nationals, some future performance leaders proved that they are already very good at their craft.

Four COMP Cams Engine Builder Duel contests took place in Du Quoin on the weekend of June 26-28, and students from the Southern Illinois University Automotive Technology Organization competed in all of them. When the dust settled, the SIU students pooled their winnings and raised over $1,700 in COMP certificates to use toward their program’s Chevrolet C10 drag racing truck. The project is completely funded by donations.

In the Engine Builder Duel, two-person teams race to assemble and fire a Small Block Chevy engine in the shortest amount of time. Engines must run for 30 seconds, and participants may not receive help from anyone in the audience. The winners of each competition receive $250 COMP Cams certificates, while runners-up receive $125 COMP certificates. In Du Quoin, the teams were named each day for COMP Cams and its sister brand, FAST. 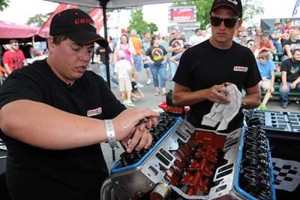 With the first scheduled Duel falling to weather on the event’s Friday date, the program kicked off on Saturday, June 27. SIU students Calvin Lohring and Dan Wereminski of Team COMP turned in a time of 37:46 to narrowly defeat classmates Ryan Hoelscher and Mac Morehead representing Team FAST by just over one minute. Ryan and Mac are Ford enthusiasts who amazingly had never built a Chevy engine.

Finally, on Sunday, June 28, Hoelscher and Morehead returned to represent Team COMP and completed their build in 35:36. However, they were bested by Tony Mifflin and Kenny Hale of Team FAST – engine builders of 30 years who turned in a blistering time of 24:57.That afternoon, two more pairs of Southern Illinois students took center stage. Paul Borus and Quincy Shiff of Team COMP completed their build in 39:57 and defeated Team FAST representatives Paul Wereminski and Hannah Lamb, who finished their engine in 49:44.