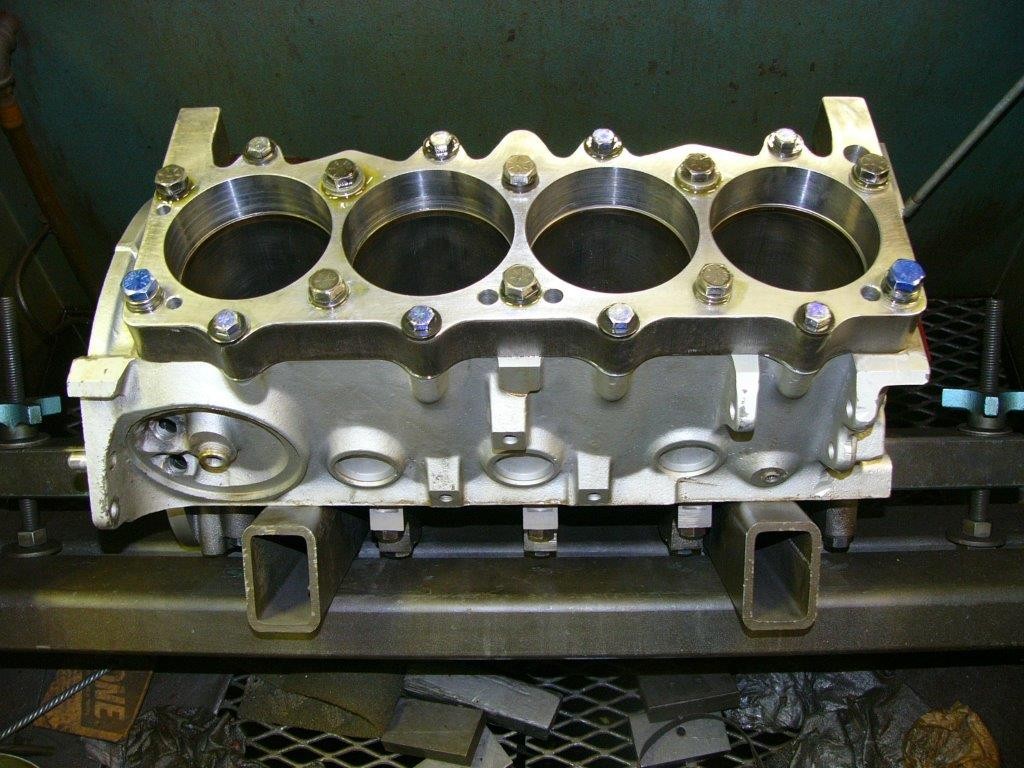 Most of the engines I build anymore are strokers. But they’re not just for racers – strokers are also great for street cars and classics.

Years ago, it was a big hassle and expense to stroke an engine. But one reason stroking is so popular today, is the convenient availability of the parts – usually sold in kit form to acquire those extra cubes. Many different strokes are offered from many different suppliers.

And, the pricing for these parts is not too bad. You can review the annual Engine Builder Stroker Engine Resource Guide at the end of this article for listings of complete kits that can help you meet your customers’ expectations. These ready-to-buy packages may even inspire you to create your own custom packages.

Recently, I did a stroker engine for a numbers-matching 1963 frame-off restoration of is a G code 406 Tri-Power Galaxie. The engine is all vintage-correct, except its short block harbors 50 extra “Flatlander Stroker Kit” cubic inches than the original 406 had.

I’ve also recently built a 413-cid Ford Cleveland and a 441-cid small block Mopar. The Cleveland is to race; the Mopar was for the Hot Rod Power Tour.

Unfortunately for me and my clients’ pocketbooks, these two small block engines, due to their special purposes, are an exception: no kit for them. Special custom made pistons and cranks were necessary for both the Ford and Mopar. Ironically both engines will sport the same 6˝, 2.100˝ journal H Beam rods.

Now, you can buy stroker kits with all kinds of options including having the assembly pre-balanced. SCAT and others will neutral balance a small block Ford stroker assembly for only a little extra money – doing that is a no brainer. And some aftermarket Ford cranks are even made in lieu of that. 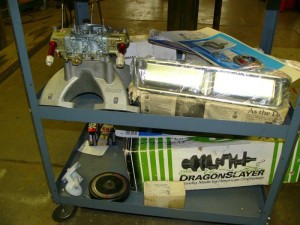 The new cranks offered are cast steel, forged steel or billet. Rods are available for all brands in I beam and H beam configurations with various rod bolt choices. The piston choices range from hypereutectic cast to premium forged, and various compression ratios.

I have to admit, the kits make life easier for the builder. But your integrity still needs to prevail. All those parts need to be checked closely – journal sizes, rod bores, piston measurements and weights, etc. – just as if you were specifying each part separately.

An initial mock up should be done to make sure the stroker crank and rods clear the block, oil pump, cam, girdle (if used), pan and windage tray. In some cases, alterations may be needed, because a minimum of .050˝ clearance is needed. If alterations are needed for clearance, it may take several mock-ups. When all is clear, then check all the other vitals.

Inspect the deck heights and pour volume to verify the compression ratio (I use the Smokey Yunick method). This is also a good time to check the cam bearing fit, lift,     valve-to-piston clearance, rocker geometry and even dial the cam in. Be sure to verify the rod side clearance before final assembly.

A tip for Ford stroker builders: most new aftermarket Cleveland cranks have a Windsor nose, causing spacing problems with the Cleveland’s lower timing gear. Make sure you get at a timing set that addresses that problem.

I have been lucky with kits I’ve used and haven’t had any major kit issues. I did have a kit a while back that came with stock rod bearings, which would have been into the radius of the new stroker crank in the kit.

Bearings for high performance and racing cranks have a larger radius in the rod and main journals so they need to be chamfered or narrowed (the options for most high performance bearings). In a couple of cases, I had to tune up the fit of the wrist pin bushings a bit, and adjust the side clearance of the rods. I’ve heard of some horror stories of much worse stroker kit problems, but, knock on wood, I’ve been ok so far.

Today, besides stroker kits, your customers have a multitude of crate engines, in various strokes and performance modes, to choose from. In many cases, they seem to be very reliable – in fact, I have tuned on some. It is not easy for small independents like me to compete, pricewise, with the big crate engine builders and sellers that can mass-produce them and buy parts at factory prices.

But you shouldn’t have to give up on competing with crates to build stroker engines.

Thirty years ago, I “Animalized” a couple of 454 LS7 engines for racers from new GM crate engines I purchased from a well-known crate builder. One was for a drag race boat; the other was for a Super Pro drag strip dragster.

Using a Chevy crate engine was actually my Super Pro customer’s idea. The price was great, in fact, the parts alone would have cost much more. Back then, an LS7 crate engine from GM came complete, intake to pan plus water pump and flywheel for under $2,000.

But to just bolt a crate engine in 30 years ago, and expect it to win was a dangerous choice. My drag boat customer found that out the hard way.

To be fair, the Chevy dealer from whom I bought those LS7 crate engines warned against doing so. He adamantly told me to take them apart first – never try to just run them.

The bolted-in 427 engine was a mess when the boat racer brought it to me. It had the wrong valve springs and cam, the springs were in serious coil bind, the engine – especially on the underside of the pistons – was full of dirt and glistening glass beads. There were many other problems, but I managed to salvage it.

What I learned from that situation is what I did with the LS7 engine I bought for the dragster. First, I disassembled it completely and blueprinted it. I replaced the stock boron bolted rods with high performance rods. I replaced all the valves with heavy-duty stainless race valves; used top-of-the-line valve springs with 10 degree steel retainers and keepers. I added premium roller rockers and an aftermarket girdle. We did use the original LS7 cam and aluminum intake and installed an aluminum water pump. The big cast iron flywheel gave way due to the use of the Powerglide transmission. The valve timing set was changed to a performance True Roller setup.

To be fair, the block deck and line bore were good, though I gave the cylinders a light hone. The crank had taper in the rear journal that ranged from .001˝ to .003˝ front to back. I had no choice and had the crank turned  .010˝ on the mains. I also had to do a little work on the piston domes. Then I balanced the whole shebang.

After we were done, the owners of those crate engines sold off all the new parts we did not use. They actually made out pretty well!

That Super Pro dragster engine ran for years and even took home a Super Pro track championship. The owner had me freshen that engine every couple years with a light hone, new rings and bearings, clean up the heads, etc. It was just routine – we never needed any major parts. I did a similar program with the drag boat owner and his previously run crate 427.

A few years ago, a 383 Windsor was brought to me as a basket case. It started out as a crate engine, but was badly abused. At some time the original iron heads had been replaced with high performance aftermarket heads, and the bigger 2.02˝ intake valves hit the corners of the smaller 1.84˝ valve reliefs on the forged pistons. The block deck had been polished, apparently with a Scotch-Brite rotating disc, until all the edges, including the cylinder bore, tapered .004˝ in the fire ring area. I suspect this was done during the head change…after which the head gaskets were blown and the engine overheated.

We had to mill the block decks .005˝. Thank goodness, those nice expensive aftermarket heads were ok!

Some rings were broken along with the ring lands and all of the bearings were a mess, ready to spin in the rods. I had to totally rebuild it. New, proper forged pistons were used along with new connecting rods, new bearings, cam, lifters etc. Amazingly the 3.85˝ crank was saved with just a polish – with a little attention, that engine ran (and still runs!) great.

I could not blame the crate people for that one. Like a lot of high performance cars and engines, it just fell into the wrong hands.

Luckily, there are enough clients who want an exclusive, and are willing to pay for such to keep me busy.

The Mopar client brought me a new performance 4.000˝ crank, an 18-bolt R3 block and W7 15-degree race heads with performance rockers. Block bores measured 4.186˝ to 4.187˝. I honed them to a consistent 4.190˝ using my brand new 18-bolt SB Mopar Rick Davis torque plate. This 9.200˝ deck height R3 block is Siamese, capable of up to a 4.220˝ bore, but I sonic tested it anyway. Pistons were custom made for me and the connecting rods are steel H-beam 6˝ Chevy.

The heads needed to be evenly CC’d. The titanium valves and hardware were ok for the new aftermarket hydraulic roller cam. Intake is a Mopar single plane topped with an older, but like new 850 double pumper carburetor.

The Ford Cleveland is a mirror of those popular in the ‘70s Pro Stock cars. Its purpose is for a Nostalgia Pro Stock Pinto, once owned and raced by Wayne Gapp.

My Ford client provided a special XE 9.200˝ deck height Cleveland Ford block. The neutral-balanced 4.000˝ steel crank required the special timing set I mentioned earlier. I’m using 6˝ Chevy rods. One of my leftover Gapp and Roush-type pistons, from my SB Pro Stock days, provided a sample for the piston manufacturer and 10 were custom made with my name on them.

This former Gapp car will get a lot of ink and video!

Next on the assembly stand is a freshening of a big block Chevy Super Comp engine. Of course, it is a stroker!