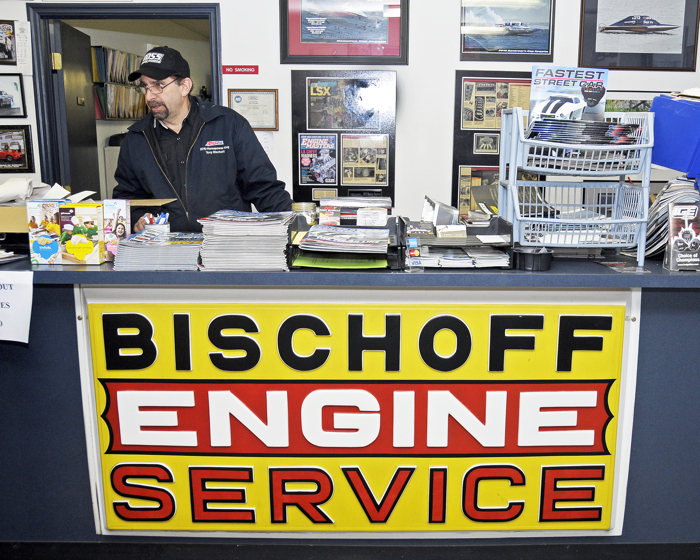 Bischoff’s is the largest engine-building facility we have visited, yet the layout of the interior holding dozens of engine builds being carried out at the same time tells of the organization of the operation despite the many different jobs on many numerous types of racing engines.

Bischoff explains that he started the organization two decades ago with the main emphasis at the time on rebuilding stock engines. “I learned a lot about performance from working on those everyday engines,” he says. “We gave a warranty on each engine so it had to be right before we let it go. Surprisingly, this served as a sound foundation for building performance engines.”

Over the years, the attention to performance kept increasing. “The fact that I compete a four-wheel-drive sand dragster seems to give customers more confidence in our operation,” he says.

In 1997, Bischoff really got serious with the acquisition of his dyno. From that point on, he started more and more precision equipment, enabling him to address just about any aspect of performance engine building.

Bischoff says he is most active in the building of both big and small block nitrous drag race engines. And being in a rural Midwest location, it’s not surprising that there is also work on both two- and four-wheel-drive pulling trucks along with some pulling tractors. And finally, small four-cylinder engines for race boats.

Like many Engine Builder readers, Bischoff’s customers come in asking for his performance expertiser. “The smallest percentage, about 10 percent, ask us to build a performance race engine from scratch. Then about 30 percent of our customers just need a freshen-up to re-acquire lost performance,” he says.

“But the vast majority want an engine upgrade, from just a minimal to full race,” he explains. “I’ll  tell a customer if I don’t think it’s economical to do an engine, but if they keep insisting, they have to show the money before we start on it.”

Biscoff believes that getting money for his engine work upfront is crucial. With many engine builders running operations similar to his, where numerous different jobs are happening simultaneously, having full payment upfront keeps things moving smoothly.

Bischoff says that all types of induction are a part of his engine building process. “We use carbs, injection, supercharging, turbocharging and nitrous,” he says, depending on what’s needed. “Each of them has its advantages and negatives depending on their particular motorsports application.

“Carbs have their place and have been around the longest, of course, and I believe that they actually atomize the fuel better,” he says. “Fuel injection has been a part of our operation since the mid-1980s. This is now common in motorsports and is taking over from the carbs. Superchargers have been around for a long time as well, with the Roots-type blower being the standard today.”

Bischoff and hsis team have different considerations when working with different custemers in building or modifying engines for drag racing, stock car racing, and tractor/truck pulling.

There are a lot of engine performance considerations for drag racing. “One of my goals is to generate more torque at the higher rpms,” Bischoff  says. “Getting off the line quickly is imperative. We try to optimize the engine so the car could run with a lower rearend ratio with more torque at the rear axle.”

With a naturally-aspirated drag engine, Bischoff indicates that the horsepower range of his creations is normally between 600 and 1800 horsepower. With a turbo, nitrous, or supercharger, the top level could reach 3,000 horsepower. “Without a doubt, drag racing is very hard on the engine, which has to endure  3G-or-more loading at vehicle launch,” he says.

“The normally-aspirated engines have a pretty frequent weak link with the valve train, springs or lifters. With other more-powerful engines, the weak link is either the pistons or head gasket.”

Just because it’s racing, the parameters may be completely different. For stock car racers, Bischoff has to build something that, instead of running full-bore for just a few seconds, will be durable for races of 100 laps or more. Although the engine doesn’t need to be nearly as powerful –the rpm range usually being between 6,000-8,500 rpm – strength is key. Depending on the type of racing being done, induction is either carburetion or injection. Mostly gas is used, but some series allow alcohol.

Bischoff indicates that he will work on powerplants from different engine builders, but customers with his engines requiring repair alwas have the highest prioriry. He calculates that about 1,000 laps on a stock car engine usually require a freshening up, where rings and bearings are checked for wear.

He says carbureted engines in dirt stock cars present a challenging situation due to the dust swirling around inside the engine compartment. “It can really affect the lifespan of the engine,” Bischoff says. “An efficient air filter is paramount. The dust is very abrasive and can greatly increase engine wear. However, besides the dirt getting into the engine, there really isn’t that much difference between pavement and dirt. With the dirt cars’ huge rear tires, they can hook up about as well as the pavement tires.”

Pulling is another tough motorsport on an engine, says Bischoff – maybe the toughest. A pulling vehicle needs big rpms off the line and, unlike conventional  drag engines, there needs to be additional power for the dead load that must also be set into motion.

It’s not the dirt and dust generated that’s hard on pulling engines, nor the impressive power needed at the launch, Bischoff explains. Interestingly, the biggest strain on the engine occurs at the very end of the run when the weight being pulled is at its maximum.

“You have to sustain about 9,000 rpm for 20-30 seconds,” he says. “We usually have a rev limiter, but the tremendous force on the engine can cause possible failure because pistons and other parts may actually penetrate the block.

“The engines we use in this application are big block 410 engines with 1000 cfm four-barrel carbs,” Bischoff says. “If the tires are spinning during those final seconds, the strain on the engine is reduced.”

The Mud Drag activity starts off like a standard dragster and dives directly into a mud pit. “It’s a huge stress on the engine because the tires are a lot heavier having been loaded up with mud. Keeping the engine revved up is super important or you will bog down almost immediately,” Bischoff says.

Talking about the recent economic trends and how they affected his business, Bischoff says, “The downturn in 2008-2009 really did us in. There were a number of guys that quit racing entirely, some of whom had been doing it for many years.”

But like his engines, Bischoff says his customers have stayed strong and resilient. “Things have come back gradually,” he says. “By last winter, our work was almost back to the pre-depression conditions.”