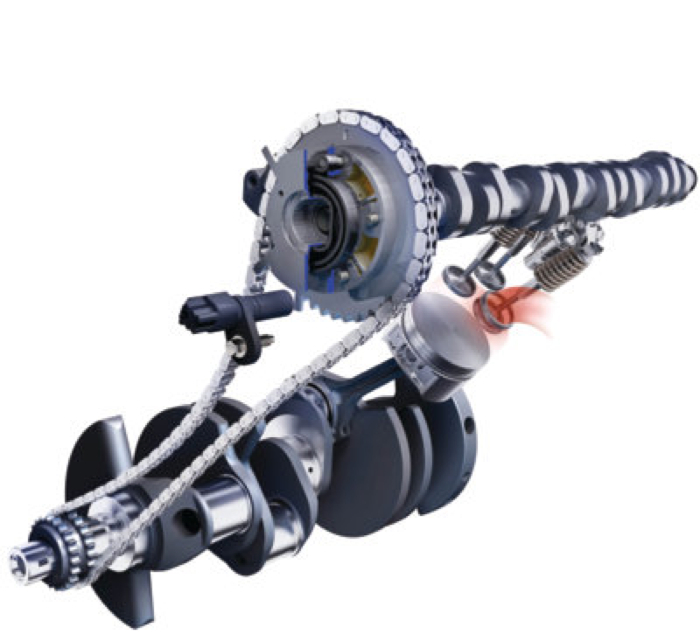 Let’s face it: timing used to be relatively easy. These days, however, as with most every other engine component, the technology and innovation that leads to more fuel efficiency and performance also means increased complexity with timing components. 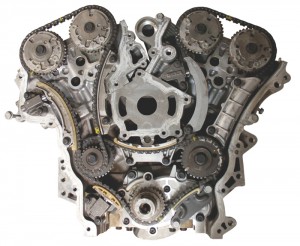 The 3.6L GM V6 engine has four camshafts, two idler sprockets, three timing chains, four shaft sensors and a crankshaft sensor in addition to the components in the VVT system. There are at least 15 pieces needed to service this timing system – a long way from yesteday’s three-piece sets. Photo courtesy Melling Engine Parts.

Let’s face it: timing used to be relatively easy. These days, however, as with most every other engine component, the technology and innovation that leads to more fuel efficiency and performance also means increased complexity with timing components.

You’re already facing challenges in understanding late model chain drive timing systems and how to properly set up the camshaft, crankshaft and balance shafts along with the electronic sensors used by the powertrain system (aka, the computer) to achieve correct engine performance – guess what? That’s unlikely to change.

Speaking with leading timing component manufacturers, one thing is clear – timing is critical and will only continue to be more important.

“We’ve seen a shift away from conventional three-piece timing sets,” explains one manufacturer. “As such, the more modern timing setup – with the sprockets regulating the firing of the engine – will continue to become more critical.”

Take the GM V6, 3.6L DOHC engine, for example. Like some bizarre math word problem, this DOHC, four camshaft engine uses two idler sprockets requiring three separate timing chains to operate the timing system. There are four camshaft sensors and a crankshaft sensor used to operate the VVT system, etc. The front of the engine is shown below and includes 15 pieces needed to service this timing system – that doesn’t include any of the VVT components.

“Unlike older engines, late model applications use multiple camshafts and balance shafts requiring more sensor input to the computer to lower emissions while gaining horsepower and torque,” says one timing component manufacturer. “This also controls VVT operation. A check engine light can easily be triggered if new timing components are not properly installed and every engine is a little bit different.”

The overall systems have gotten more complicated,” says one expert. “We’ve successfully made the adjustment from yesterday’s three-piece sets to overhead cams but I think now, we’re still reacting to the many different versions, as well as adding VVT or even twin VVTs per head. That’s extra rotating mass, which is more demanding on the chains themselves.  Variable valve timing loads the system dynamically, which adds loads that change due to the valvetrain changes. The relative motion itself strains the system when the VVT is in operation.

In addition, these systems depend heavily on hydraulics and the hydraulic system to support the stability of the system. This puts more demand on the engine’s hydraulic system and you’re depending on the timing system to keep it all stable.

It’s a vey interdependent system and, explains one of our experts, when this stuff decides to fail, it’s the perfect storm.

We’re seeing much smaller pitch that have less rotating mass which, on some levels, makes total sense. However, smaller components can add challenges on other levels.  Components have gotten smaller and more lightweight so we’re demanding more from less material.

“When you do small pitch systems the sprockets get smaller, your forces go up and the demands on the chain per component go up,” a supplier says.

Trying to keep up in the aftermarket, our experts say, is the tricky part. The game has changed – 30-40 years ago in the golden era of three-piece sets, what the aftermarket produced was better than what the OE could. It wasn’t that difficult to make a better part than OE. The aftermarket could make modifications to improve the part.

Now, the OE has the ability to invest enormous amounts of testing and equipment to develop premium products. “Our challenge is to produce a part in the aftermarket at lower volumes that is price competitive and still meets that quality standards. We have to do it differently, but we’re figuring our way through it. We’re meeting these challenges by being smarter and more involved with component setups.”

One leading supplier says that he anticipates engine builders will rely more heavily on domestic manufacturers that have extensive experience at the OE level and who can provide increased support. Additionally, technical education will be more important in order to repair these engines, and their computer skills in particular will play a larger role in the job.

“We haven’t met our peak yet with technology – the OEs will continue to come up with innovations,” said one manufacturer referencing replacement components for turbocharged or direct injection applications.

Slack in the chain will cause it to ride up on the sprocket teeth and stretch or break the chain. Timing systems using hydraulic chain tensioners are operated by using engine oil and oil pressure. 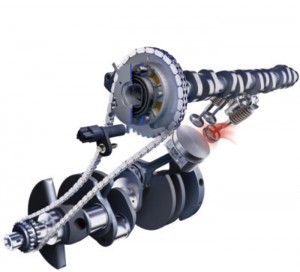 Variable valve timing is the state of the art, according to industry experts, but even this new technology will be surpassed in the aftermarket. How turbocharging, direct-injection and other future technologies impact ever-smaller timing components will be the next challenge.

One other note for hydraulic tensioners used in the late-model timing systems. Using the correct OE design oil filter with “check valve” along with recommended oil viscosity has become critical on these systems. If there’s a delay in oil pressure on initial startup the system will not have the correct amount of tension on the chain causing it to ride up on the sprocket teeth. The chains have become so long on overhead cam engines that the system will not tolerate slack in the chain(s) for very long without damaging the system.

Installers often don’t realize how these operate and are affected by the overall condition of the engine. It’s critical that the engine is operated using the correct type of oil and oil viscosity.

Oil changes must be done when recommended by the OE manufacturer to keep a clean oil supply. The tensioners have very small oil passages and check valves that can become plugged, reducing the amount of pin pressure being applied to the tensioner arm or chain.

When a timing system fails and it uses hydraulic tensioners, other areas of the engine must be checked before installing new timing components. The overall condition of the engine has to be good. A worn engine will have problems with oil pressure whether cold or hot / idle or while driving and could have sludge and dirt built up inside it. A low oil level can introduce air into the oiling system and cause problems with these tensioners resulting in an intermittent pounding effect on the chain instead of constant steady pressure.

Engine startup after sitting overnight and cold ambient temperatures can cause a delay in what manufacturers call tensioner “pump up” and can cause a sudden pounding effect on the timing chain causing abnormal wear on the tensioner arms and guides. The arms and guides are normally made of plastic or have a plastic liner for the chain to ride on with an aluminum back/carrier.

The bottom line, experts say, is that you must use the correct type of oil and viscosity. Remind your installer customer to tell their customers that regular oil changes must be done to maintain a clean oil supply.

Engine builders are often made aware of the timing challenges they face after there is a problem. However, industry leaders say professional builders and installers  very quickly learn and adapt to the technology – we’re in an age with easy-to-access technical information – QR codes that will take you to installation instructions or electronic repair manuals – people have learned that it’s much better to go about it informed than try to take a stab at it. It’s too dangerous and expensive to take chances.

Resources like the one you’re holding can help you keep up with the latest developments. Suppliers say specialized knowledge of VVT, cam phasers, solenoids and the interrelationship of each will be key to doing the job right the first time and avoiding an expensive comeback.

But it will also be up to you to continue to invest in education on the electronics side. Computer and drivetrain technology will continue to change. Access to OE service information will be a must along with a good understanding of engine design. For example, one manufacturer reminds our readers that you must know the difference between an interference and non-interference engine before you attempt to service the timing components. You’ll also need access to the special tools used to hold the camshafts and crankshaft to avoid rotation and possibly damaging the valve train components and pistons. n

Engine Builder would like to thank representatives from  leading timing component manufacturers who weighed in on some of these topics our readers and their installer customers may face with regard to timing-related issues. Jeff Schaerer from Melling Engine Parts, Rick Simko from Elgin Industries and Jason Thompson from Cloyes offered opinions, technical information and solid background information.

Advertisement
In this article:Complexities, Timing Components

The Complexities of Modern Timing