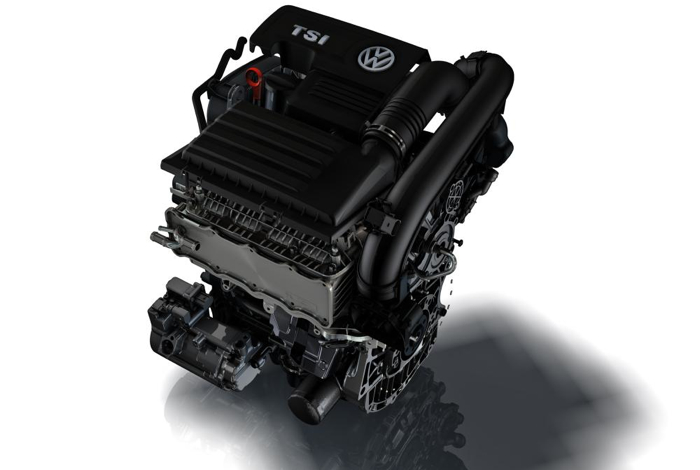 The 1.4-liter gasoline engine is one of Volkswagen’s latest EA211 series of small engines. This features lightweight aluminum construction, an integrated (into the head) exhaust manifold, and a toothed-belt drive for its double overhead camshaft valvetrain that incorporates variable intake and exhaust timing. 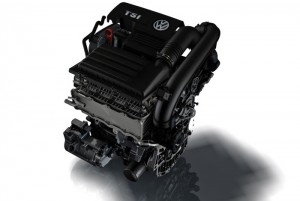 Volkswagen pioneered the use of small displacement; highly efficient turbocharged and direct-injection engines in the U.S. Volkswagen first used this combination of turbocharging and direct injection in this market in its TDI Clean Diesel engines in the Passat in 1996 and extended it into the gasoline field in the 2006 Jetta GLI and GTI models. Since then, the Volkswagen EA888 four-cylinder engine has set the benchmark for small-displacement turbocharged engines, beginning with the 2009 CC, while the EA288 TDI has set the standard for diesel engines in the North American market since it first appeared in the 2009 Jetta TDI Clean Diesel.

Building on that legacy, Volkswagen is introducing the EA211 four-cylinder turbocharged and direct-injection TSI engine into the Jetta range, replacing the previous naturally aspirated 2.0-liter engine that was used in the S model and the 1.8T TSI engine in the SE model. This brings implementation of intelligent downsizing to more than 97 percent of vehicles sold by Volkswagen in the U.S., available across all the models on sale.

The 1.4-liter gasoline engine is one of Volkswagen’s latest EA211 series of small engines. This features lightweight aluminum construction, an integrated (into the head) exhaust manifold, and a toothed-belt drive for its double overhead camshaft valvetrain that incorporates variable intake and exhaust timing. The only aspect to be carried over from the EA111 engine that preceded it is the 82 mm cylinder spacing. The cylinder bore was decreased by 2 mm (to 74.5mm) while the stroke was increased to 80mm, a change which not only helps compactness, but also increases torque and presents an ideal canvas for adding boost (turbocharging or supercharging)—something the engineers at Volkswagen have spent many years perfecting.

The 1.4-liter TSI engine in the Jetta features a 10.0:1 compression ratio, direct fuel injection, and turbocharging to produce 150 hp at 5000 rpm. This engine’s turbocharging system offers incredible boost response thanks to its cleverly designed intake manifold, which enables the use of a surprisingly small, single-scroll compressor. The intercooler, uniquely, is integrated directly into the injection-molded induction pipe. This design generates maximum torque of 184 pound-feet at 1400 rpm. The engine will be mated to either a five-speed manual or a six-speed automatic transmission: manufacturer estimated fuel economy on the highway is predicted to be 39 mpg with the six-speed automatic transmission, an improvement of 13 percent over the EPA estimated highway fuel economy for the previous 2.0-liter engine and 7 percent over the 1.8T.

Joerg Sommer, Vice President, Product Marketing and Strategy, Volkswagen of America said: “We are delighted that so many Volkswagen customers are now able to benefit from the performance and fuel-efficiency of our turbocharged and direct-injection engines, whether they choose TDI or TSI technology. Volkswagen leads the industry with implementation of these engines in North America and we are excited that we are furthering our leadership with the introduction of the latest-generation EA211 engine in the Jetta.”