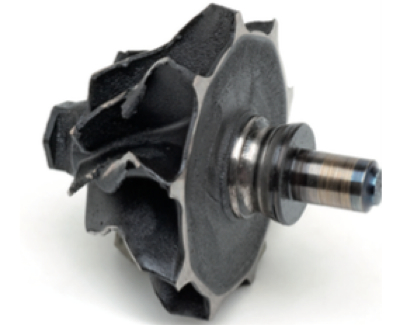 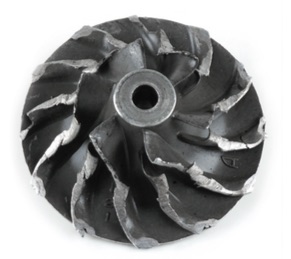 Turbochargers are used to enhance an engine’s performance and optimize combustion. To achieve good and complete combustion in the engine, a mixture ratio of 2.2 lbs. fuel and approximately 33 lbs. air is necessary (stoichiometric fuel ratio). During turbocharging, the density of the intake air is elevated and the air volume increased.

The volumetric efficiency and thus the efficiency of the combustion engine are significantly improved by means of turbocharging. In addition, the torque can be increased considerably, which enhances performance. The turbocharged engine with the same power output as a naturally aspirated engine can therefore be designed with a smaller displacement and lower weight.

The core of the turbocharger is the rotating assembly, consisting of the turbine wheel with shaft and impeller. The turbine wheel is located on the exhaust side. It is firmly connected to the shaft through friction welding or laser welding. The impeller is mounted on the other end of the rotor shaft, generally with a screw connection.

The exhaust flow from the engine is directed through the turbine, which leads to a rapid rotational movement of the turbine wheel, subsequently driving the impeller. The turbine speed depends on the design and exhaust volume. In small turbochargers, the rotating assembly reaches speeds up to 300,000 RPM. In order not to destroy the turbocharger and engine, the maximum charge air pressure is usually limited by boost pressure regulation.

This information is found in “Turbocharger: Damage Profiles, Causes and Prevention,” a training manual from Mahle Aftermarket (www.mahle-aftermarket.com).

Inadequate lubrication is one of the most frequent causes for turbochargers to fail. If the turbocharger is not sufficiently supplied with oil, its very high speeds will cause damage within a very short time.

• The impeller and turbine wheel can strike the turbocharger housing on account of bearing damage. This can be recognized from wear marks on the housing.

• If the turbocharger boost pressure is too low, the engine will not perform properly: the rotating assembly no longer reaches the maximum speed and can no longer build up the full boost pressure as a result. The reason for this is the mixed friction caused by the inadequate lubrication.

• The exhaust system emits black smoke. These are the effects of the engine not being supplied with enough air and a correspondingly too rich fuel-air mixture.

• The shaft shank exhibits clear discoloration caused by friction due to inadequate lubrication and the resultant high temperatures between the shaft and the bearings. If the temperature exceeds a certain level, the bearing material will become deposited on the shaft, the bushing might become completely fused to the shaft, or the shaft can even burn out and break.

• If bushings that are permanently incorporated in the bearing housing become fused to the shaft, the bushings might turn out of position.

• The shaft might suddenly become blocked in the bearing housing due to the mixed friction. If the rotating assembly is suddenly blocked, the locking nut of the impeller can become loose.

• The rotating assembly can exhibit a large imbalance owing to the contact with the housing, which might result in the radial bearing breaking.

• Due to incorrect oil or heat soak, the bearing housing can become carbonized.

• The radial bearings have fretted.

• Knocked-out bearings can cause too great a wobble of the shaft, causing the bearing collar to also be damaged.

• The oil level in the engine is generally too low. As a result, not only the engine, but also the turbocharger, receives an inadequate oil lubrication and oil cooling.

• If the engine was turned off while hot, the oil supply line can become carbonized, which means the turbocharger is no longer supplied with enough oil.

• Foreign substances in the oil circuit, such as dirt or sealing residues, may clog the oil supply line of the turbocharger and/or the turbo’s bearing housing.

• If the viscosity of the oil is too high, the oil transport to the bearing points is delayed, which means the timely oil supply of the turbocharger is not ensured, which can lead to mixed friction

• If the engine is operated with biodiesel or vegetable oil, there is a risk of the engine oil gelling.

• The cross section of the bearing housing supply bore might be reduced either through an incorrect flange seal or by a liquid sealant.

Dirt, soot, fuel, water, combustion residues, or metal abrasion can contaminate the oil. Even the smallest particles in the oil can cause serious damage to the turbocharger due to its extremely high speeds.

• The smallest foreign substances in the oil cause grooves in the bushings. The piston rings in the turbocharger can undergo serious wear. As worn piston rings can no longer adequately seal the turbocharger, the oil enters the turbine side, which can be discerned by increased oil consumption.

• The bearing play of the rotating assembly increases due to the worn bushings. This leads to wobbling movements and causes the turbine wheel or impeller to come into contact with the housing. The shaft might subsequently break off.

• The bearing collar, i.e. the thrust washer of the axial bearing, exhibits grooves.

• Grooves or fretting marks are discernible in the axial bearing.

• Due to a blocked oil return line, the oil in the turbocharger can no longer flow off and is instead forced out to the compressor and turbine side. On the turbine side, the oil might then burn onto the shaft and coke. Owing to the oil carbon layer, the bearing housing and the piston rings might be significantly worn off as a consequence.

• The shaft of the turbocharger shows clear signs of wear at the bearing points.

• If the maintenance intervals are exceeded, the oil filter can no longer filter enough dirt out of the oil.

• If the cylinder head gasket or the oil cooler is leaking, water will enter the oil circuit and dilute the oil. Its carrying capacity is thus reduced.

• If the engine was repaired, but not properly cleaned before assembly, dirt will be in the engine even before putting it into operation for the first time.

• If the engine is subject to considerable wear, the mostly metallic wear debris also finds its way into the turbocharger via the oil circuit.

• If combustion faults occur in the engine, non-combusted fuel can end up in the oil. The carrying capacity of the oil is reduced by this dilution.

If the engine shows signs of increased oil consumption and emits blue smoke, you must check the turbocharger as a culprit. But remember, oil is forced out of the housing from a turbocharger only if there’s a problem.

• Oil is forced out of the turbine or compressor side of the turbocharger.

• Blue smoke is emitted from the exhaust system.

• Engine oil has accumulated in the intake section and charge air cooler.

• Uncontrolled overspeeds resulting in the engine “rising” due to the engine oil accumulating in the charge air cooler, which is blown into the intake of the engine and combusted.

• The guide vanes might be coked in a VTG turbocharger. 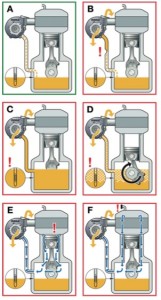 • If the engine is supplied with too much oil, the oil can no longer flow back out of the oil return line into the oil pan (Fig. C). The crankshaft also splashes up the oil. This results in the oil foaming, which forms an additional barrier for the returning oil from the turbocharger (Fig. D).

• If the pressure in the crankcase is too high (Fig. E & F) this pressure will also be transferred to the oil return line. The oil drainage from the turbocharger is thus hindered, and the oil escapes from the turbine or compressor.

Remember, your customers’ oil change habits may impact more than just their engine. Be sure to check their turbo during an engine rebuild.

Advertisement
In this article:Mahle, Turbocharged