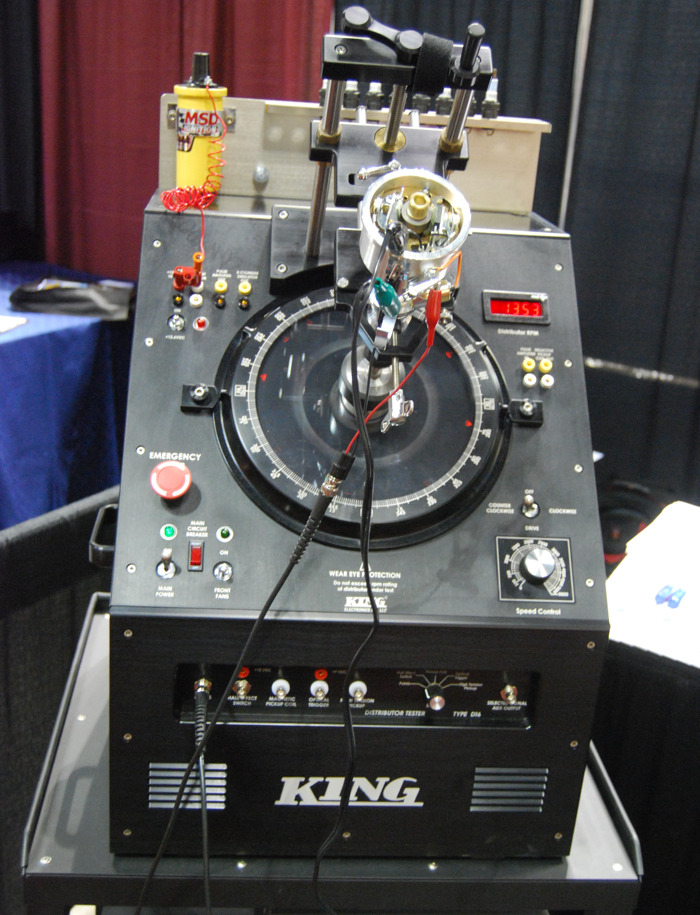 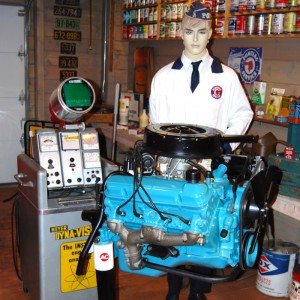 Heyer Dyna-Vision engine analyzer is used in this diorama at the Pontiac-Oakland Automotive Museum in Pontiac, IL.

Companies like the Sun Electric Corp., of Crystal Lake, IL, Snap-On Corp. of Kenosha, WI, and Allen Test Products of Melville, NY, developed equipment to test automobile components and analyze engine performance. Serviceable older models of the machines these companies made are found in the garages of many old-car restorers today. Engine analyzers and distributor testers are the most common types of equipment seen in the old-car hobby. Of the two, the distributor tester seems to be the more desirable and valuable type of machine.

As the name implies electronic engine analyzers were designed to diagnose the condition of a car’s engine. Speedy analysis was an important feature when it came to selling the machines. Why should a mechanic in the ’60s buy an electronic analyzer that cost almost as much as a new car? Because “time meant money” and a tester could pay for itself by speeding up repairs.

Since there were small repair shops and big ones, the analyzers came in all sizes. Sun offered individual testers for volts-ignition, tach-dwell, vacuum pressure, combustion efficiency, cylinder leakage, coil circuitry and condenser resistance. These could be used as hand-held instruments or mounted together in a headframe on top of a rolling steel cabinet. This approach allowed small shop owners to buy one tester at a time and slowly build their own testing console.

Bigger shops could buy complete machines with cabinets. These also varied in features and size. In 1961, customers could pick from three different variations of the Sun 300 Scope Tune-Up Tester. The first included a Sun SS-550 oscilloscope, plus the first four testers mentioned above and sold for $1,046. The second added the fifth and sixth testers mentioned above and ran $1,294. The high-end model added the last two testers listed above and cost $1,516.

By the late-‘60s, the Sun 820 Electronic Engine Tester was on the market for $1,480. It had a squarer and slightly larger scope and was more of an all-in-one single console unit. By 1969, the 820 was superceded by the EET-920 and EET-1120 machines. EET stood for Electronic Engine Tester. The 920 incorporated all the Sun testers on a single width rolling cabinet. The 1120 had the same features, but in a larger size and on a double-width cabinet. The 1120 carried a price tag of $2,635. By 1980, a Sun Infra Red Engine Analyzer cost almost four times as much, while new computer-powered versions were $49,995!

The 920 – an upgraded 1020 model – and the 1120 could be adjusted to work with 6- or 12-volt electrical systems and on four-, six- or eight-cylinder engines. These could also be set for positive- or negative-ground electrical systems. Five automobile engine functions could be completely analyzed: starting, ignition, carburetion, compression and charging. 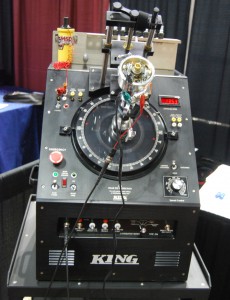 The King Distributor Tester is a modern version of the classic machines made by King Electronics Co., LLC, of Moorpark, CA.
(www.4king.com)

To check the condition of the vehicle’s battery and starting system, the mechanic read the voltmeter to analyze cranking voltage. Scope readings were used to test the coil, ignition and primary circuit for cranking coil output. A vacuum gauge gave a read-out of the cranking vacuum to help the mechanic assess mechanical factors that might affect starting. The tester’s vacuum gauge could also be used to do a PCV test of the positive crankcase ventilation system.

A Sun tester came in handy for taking various readings at a 1,000 rpm “cruising speed.” Nine tests could be done in this range. The dwell meter indicated dwell variations and the distributor’s mechanical condition. The combustion efficiency tester assessed fuel mixture settings and tested carburetor air bleeds and float levels. The E.P.B. & Vacuum Gauge could be used to make an electro power balance test and assess individual cylinder compression.

The oscilloscope near the center of the console allowed six tests at cruising speed. The scope included a pattern selector dial that served as an on-off switch and also allowed mechanics to pick three different types of patterns to view: superimposed, raster and display. The superimposed pattern showed the patterns of all cylinders on top of one another and indicated the overall uniformity of the ignition system. The raster setting allowed a mechanic to identify a specific cylinder’s pattern while viewing all cylinders at the same time. The display setting showed firing lines for each cylinder and allowed the firing voltages of all cylinders to be measured individually or simultaneously.

The superimposed setting could be used to test coil polarity and cam lobe accuracy. In the raster mode, the scope revealed condition of the secondary circuit, condition of coil and condenser and breaker point condition including point close, bounce and arcing. When set to “display,” the scope readings reflected the fuel mixture setting and tested the mixture, compression and plug rotor gap.

Two “under-acceleration” tests could be made with a Sun machine. The scope (set to display) could be used to test the spark plugs under load to see if they were worn or fouled. Also under load, the combustion efficiency tester could assess accelerator pump action to see if the carb circuit was functioning properly.

Other settings on the machine allowed the mechanic to load the engine as if it was running at 2500 rpm. This was called the “Turnpike” mode and was used in six tests. The timing advance unit could be used to test advance and assess whether the distributor’s mechanical and vacuum advance mechanisms were functioning properly. The scope (display setting) could be used to test maximum coil output (condition of coil, condenser and primary) and secondary coil insulation (condition of high-tension wires, distributor cap and rotor).

In Turnpike test mode, the Sun machine’s voltmeter could read charging voltage to test the generator or alternator and the voltage regulator. Readings on the combustion efficiency tester indicated fuel mixture and revealed the condition of the air cleaner and carburetor. Finally, vacuum gauge readings indicated whether the exhaust system was in good condition and free of restrictions.

To make different tests, the electronic engine analyzer came with various leads routed through a swiveling u-shaped arm that sprouted from the top of the console. These had clips or nipples on the ends to be attached to different electrical connections or grounding points. There were also vacuum hoses and accessories like a fuel pump tester. Such devices and connectors could be stored behind the doors in the cabinet. A complete instruction book showing how to make hook ups and how to read the oscilloscope was provided. 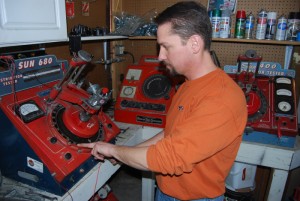 Jeff Schlemmer of Advance Distributors became an ace on the Sun Distributor Tester in high school. He rebuilds about 2,000 distributors annually.

Sun engine testers aren’t hard to operate. Most of them work like hand-held engine analyzers that hobbyists are familiar with. It does take awhile to learn how to hook the machine up to different cars for different tests. Also, it takes sometime to learn how to interpret and use the various types of oscilloscope readings. In 1969, Sun Electric had 33 sales service and training centers across the country and a staff of 610 factory trained people to teach mechanics to use the machines. Today, you’ll be lucky to find one of the 60-page Engine Performance Handbooks that came with each machine the company sold.

Matt Joseph’s Collector Car Restoration Bible described the Sun 920 as useful for gathering lots of information quickly and accurately. “It has a terrific ignition scope and accurate dwell/tach and vacuum gauge,” noted Joseph. “It also has a meter that measures cylinder leak-down, an advance timing light, an ohmmeter and circuits for measuring coil leakage and capacitance. If you see one of these in good condition at a reasonable price, you won’t regret buying it.”

Engine analyzers made by Sun and Allen can be found at swap meets, on eBay and Craig’s List and in old garages and often they don’t cost very much. We have four of them that we bought for prices between $10 and $75. The Masters Company of Fort Tomas, KY (www.distributortester.com) specializes in servicing and selling such machines.

Because the analyzers take up so much space and don’t fit easily into many hobbyist’s shops, they sell rather cheaply. The size and weight also makes these difficult to ship. The huge, large-scope, double-width-cabinet machines of the mid-‘70s are nearly twice as big and heavy. Robert Masters of the Masters Company says these are the hardest to sell and bring the lowest prices. We have one of these we bought at a Chevrolet dealer auction for $10.

Judging from Internet auctions, more old-car hobbyists are interested in buying vintage distributor testers. In many cases, the units are sold without a cabinet, which makes these easier to move, store and ship. Even though its only slightly smaller than a Sun EET-920 when the cabinet is included, the distributor testers are in high demand. Why? Because, it does a great job testing old distributors with contact points. These machines seem to always promote some spirited bidding in Internet auctions and most bring prices of $400-$800 or more if in reasonable condition. About half of the sellers will ship these for about $50 (without the cabinet), while others are sold on a pickup-only basis.