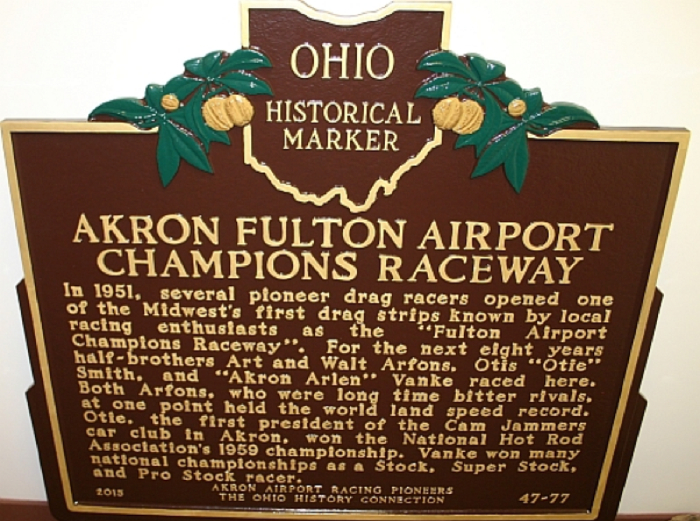 Local Ohio drag racing legends Art and Walt Arfons, Otis “Otie” Smith, and “Akron” Arlen Vanke will be the subjects of an Ohio Historical Marker plaque dedication on Father’s Day, June 19th, at the Akron Fulton Airport to honor their contributions and innovations in the drag racing industry.

Local Ohio drag racing legends Art and Walt Arfons, Otis “Otie” Smith, and “Akron” Arlen Vanke will be the subjects of an Ohio Historical Marker plaque dedication on Father’s Day, June 19th, at the Akron Fulton Airport to honor their contributions and innovations in the drag racing industry. The plaque will rest at the spot where the four renowned drag racers first began their careers in the early 1950s. At that time, Fulton Airport runway was the first National Hot Rod Association sanctioned drag race track east of the Mississippi.

This will be the first Historical Marker dedicated to racing of any kind in Ohio, and comes thanks to the efforts of the group Akron Race Legends, headed by Randy Lipscomb, with further assistance from Paul Suloff, Bob Jones, John Stevenson, and Ken Andrus. “This is the spot where these local heroes became drag racing innovators back in the ’50s and ’60s,” said Lipscomb, “and we believe that honoring these racing pioneers is long overdue.”

In addition to the ceremony, the group will also be hosting a car show, which begins at 4PM. There will be food, entertainment, and dozens of classic cars from all around Ohio in attendance. The dedication itself will begin at 5PM, and features Ohio Lieutenant Governor Mary Taylor as the key note speaker. State Representative Greta Johnson, 35th House District, will also address the audience.

Relatives of the former hot-rodders will be in attendance: Tim Arfons and Dusty Arfons-Spraggins (son and daughter of Art Arfons), Terry Arfons (son of Walt Arfons), Billy Smith (son of Otis Smith), and Craig Vanke (son of Arlen Vanke).

Otis “Otie” Smith was another Akron hot rodding hero to come from Akron, Ohio. An early supporter of the National Hot Rod Association, Smith was running the regional NHRA races in his hometown before the nationals were even established, and he raced all over the Midwest, as well as Florida, Maine, and California. By his own estimation, he went on to compete in about 100 NHRA events in his 13-year career, which included being named the 1959 Middle Eliminator winner at the National Hot Rod Association Nationals in Detroit. In addition, he was the first president of the Akron Cam Jammers car club, and was the proprietor of Otie’s Automotive in Kenmore, Ohio.

Along with the Arfons and Smith, “Akron” Arlen Vanke was another local hot rodding legend. He won innumerable races in the Stock, Super Stock, and Pro Stock classes over the course of his career, and was hired by Chrysler while still racing to help test their performance technology. In 1971, he became a member of the United States Racing Team, an organization consisting of the top names in Pro Stock racing, which exhibited across the country until 1972.

Drag Racing Legends to be Honored in June 19th Ceremony