Car enthusiasts who have dreamed of burning rubber on legendary Woodward Avenue will have their chance to do it legally during the “Roadkill Nights Powered by Dodge.” 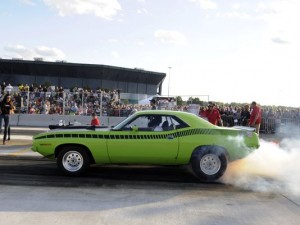 A 1970 Plymouth AAR ‘Cuda performs a burnout Aug. 12, 2015, during the RoadKill Nights Powered by Dodge at the Pontiac Silverdome in Pontiac.
(Photo: Steve Perez / The Detroit News)

Car enthusiasts who have dreamed of burning rubber on legendary Woodward Avenue will have their chance to do it legally during the “Roadkill Nights Powered by Dodge” on the night before the opening of the 2016 Woodward Dream Cruise.
According to a news release from Dodge, registration is now open for the Michigan return of the “Roadkill Nights Powered by Dodge,” hosted by TEN: The Enthusiast Network. The popular drag racing event and car festival drew more than 10,000 performance enthusiasts to its inaugural event last year alone.
This year’s event, taking place on August 19, 2016, is bigger and better, with a new, larger location at the M1 Concourse in Pontiac, MI, a cash purse totaling $19,000 and legal street drag racing on Woodward Avenue.
“Woodward is one of (if not the) most famous ‘Muscle Car Corridors’ in the country and, as far as we know, this is the first time ever that street racing on it will be legal,” said Tim Kuniskis, Head of Passenger Cars, Dodge, SRT, Chrysler and FIAT – FCA, North America. “Drag racers will be able to show their muscle when Woodward is closed from South Boulevard to Rapid Street in Pontiac to create what is sure to be an epic kick off to the weekend’s cruise events.”
Leading the races will be David Freiburger and Mike Finnegan, co-hosts of ROADKILL, the most-viewed YouTube automotive original series in the world.
“This event is uniquely Roadkill. We are racing in a spot no one else would dare to run all in the name of fun. Show up and you’ll see Roadkill cars, come and spend time with us and have the time of your life,” said David Freiburger.
Additional celebrity guest appearances are expected.
Open from noon to 10 p.m., the Aug. 19 “Roadkill Nights Powered by Dodge” event includes thrill rides in Dodge Viper, Dodge Challenger SRT Hellcat and Charger SRT Hellcat vehicles, a Show ‘n’ Shine area, Roadkill stunts and exhibitions, as well as live music, food trucks and much more.
“We’re excited about hosting ‘Roadkill Nights’ as one of the main events during our newly branded ‘Pontiac Power Week’ festival,” said Mayor of the City of Pontiac Deirdre Waterman.
Early registration for the event at www.roadkill.com/PR is encouraged.
Fans can follow the action for both Roadkill Nights events at hashtags #Roadkillnights and #poweredbydodge. For more information on ROADKILL and Roadkill Nights, see Roadkill.com and follow on Facebook facebook.com/roadkillshow and Twitter twitter.com/roadkillshow.