Every enthusiast seems to have a passion for a particular brand of manufacturer. 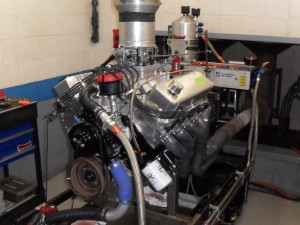 Any automotive enthusiast would agree that the quest for more power is the true addiction. From simple bolt-ons to hardcore internals such as different bore and stroke combinations tend to fuel our burning desire. Every enthusiast seems to have a passion for a particular brand of manufacturer.

Take for instance the Flathead Ford V8 engine. Even though this engine was before my time, it’s amazing at the following this particular powerplant has. This engine was first produced in 1932 and 84 years later there are tons of aftermarket parts available for about any engine combination you can think of.

Some say that the label of the 385 series came from the crankshaft stroke of the 460 because you could take a 429 block and install 460 crankshaft and pistons and have 460 cubic inches. They both shared a lot of the same internals and there were different levels of performance offered by Ford with changes to the heads, intake, camshaft, and carburetor.

The 385 series engine was first introduced in 1968 and was produced until 1997. Almost 20 years after the end of production, with the help of the aftermarket, these engines are still making huge power today.

As an automotive technician, I have had the opportunity to work on several 385 series engines yet never really grasped its full power potential. I knew these engines had a real fan base for racing applications, but not having an opportunity to modify one I could not understand the “craze” behind them. Several months ago, I had an opportunity to build a drag racing 460 engine and would like to share the experience. 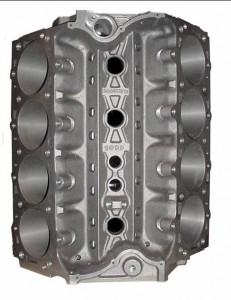 Just as with any other project, in order to make big power from a 460 engine you need to start with a good block. The most common production block casting numbers are C8VE-B, C9VE-B, D0VE-A, D1VE, and D9TE-AB.

The D9TE-AB block is considered a late-style block, being produced from 1979 until 1997. This late-style engine is externally balanced (the others prior to 1979 were internally balanced) and uses a crankshaft with slightly smaller counterweights. The counterweights are smaller because the block has deeper cylinders of almost a quarter-inch toward the oil pan. Rumor has it that this was done so that the engine could be used in heavy-duty applications where deeper piston skirts could be used.

Because of the deeper cylinders, early block internals could be used into the later block, but some clearance tweaking may be needed to clear the counterweights of early style crankshafts. Since internally balanced assemblies are preferred for racing it is better to use an early style block such as the D0VE-A since it would have thicker main caps and may or may not be a four bolt main. But, if you are building a stroker engine the D9TE block may offer more rigidity with the deeper cylinders.

One important thing to consider about the 385 series engines is its oiling system. If you’re going to make a huge amount of power it would be wise to use an aftermarket block. The 429 and 460 do not incorporate priority main oiling. Oil is pumped from the oil pan through the oil filter and into the front main galley of the block where the front main journal and front cam journal are pressurized. From there, oil enters the passenger side lifter valley then to the drivers side lifter valley and then branches down the rest of the camshaft journals and finally to the rest of the main journals.

There have been some extensive modifications done to factory blocks to incorporate priority main oiling, but the block will still lack some of the other features and benefits offered from an aftermarket block. 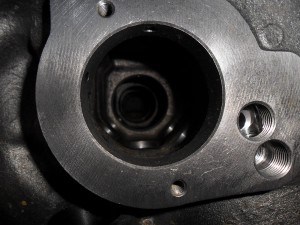 Aftermarket blocks are often overlooked because the price may not be as appealing as the prized junkyard block you may have found at a great deal. But, let’s look closer at the “actual” cost of a junkyard find. Remember that by the time you figure the price of the engine along with cleaning, magnafluxing, sonic checking, decking, align honing, and boring, you’ll probably only save around $300 of the price of an aftermarket block.

There are several options available to consider when purchasing an aftermarket block based on the application and future potential of the engine. There are entry level versions that have high nickel content casting, 4-bolt main caps 1 through 5, priority main oiling, and bore size up to 4.500”. Racing blocks have a solid ladder valley tray, Siamese cylinder bores, billet steel bearing caps, and bores capable of 4.700”. The great thing is that these blocks come with a number of options that are available when ordering such as bore size, variety of lifter bore sizes, main bearing size (Cleveland main size available) and cam bearing size.

Production cylinder heads for the 385 series engines were cast iron. Each cylinder head casting number has its own level of performance based on its intended application. These heads are known as “Poly Angle” or “Canted Valve” heads because the valves open towards the bore centerline unshrouding the valve as they open. Here is a list of a few different casting numbers and the application to help guide your project if you choose to use factory cast heads. Even though the intake ports are huge, the intake to exhaust flow ratio is poor. Small porting modifications done on the exhaust side can often help tremendously. 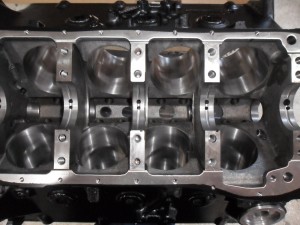 C9VE – Basically the same as the C8VE used for the 1969 model year with some engineering revisions.

D0VE-C – Used in the beginning of the 1970 model year until the end of 1971. Similar to the earlier head casting but suffered from limited airflow and poor exhaust.

D2OE-AA, D2OE-AB, and D3AE-FE – Known as the Police Interceptor head produced from 1972 through 1974, it is very similar to the Cobra Jet castings with slightly smaller intake ports. Valve sizes are 2.19” intake and 1.72” exhaust with combustion chamber size between 87 and 90 ccs. These were a great alternative to Cobra Jet castings because they were so plentiful. They offered better exhaust flow and good power in street engines up to 6,000 rpm.

D00E-R – Cobra and Super Cobra Jet casting. Combustion chamber volumes vary between 71 to 75 ccs. Valve sizes are 2.24” intake and 1.72” exhaust with the both the intake and exhaust ports being larger. Flows more air than the Police Interceptor cylinder head and with some port work will make more power.

M-6049-C460 – Known as the “C460” produced from 2000 until present. Step up from the A460 cylinder heads with capability of 1000 horsepower. Require special pistons with a minimal bore size of 4.500”. The cylinder head will require porting with special cast intake, rocker arms, and headers.

M-6049-E460 – Known as the “E460 used in Pro Stock racing 10 years ago. These cylinder heads were produced and sold in “raw” form meaning that the intake and exhaust ports along with the combustion chamber requires special machining along with the use of a fabricated intake and other custom components. 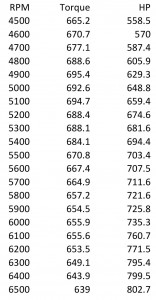 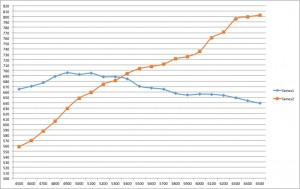 There is one manufacturer that produces a CNC version cast iron head known as the “F460”.

Being intrigued by the performance potential and availability of aftermarket parts for a 460 we decided to build a stroker version for street use. The basis of the engine build came from a customer who wanted something for a 1965 Ford F100 truck he was restoring in pro-street style. There was not per say a budget for the build, but the customer did want to achieve power along with reliability.

After looking for on-the-shelf parts we came up with a combination that was quite surprising. We knew our best option was to choose an aftermarket sportsman-style block with four bolt mains, priority main oiling, and a 4.390” bore. This would be a .030” over stock bore because pistons are more common using a .030” and .080” over bore in stroker applications. Aftermarket cylinder heads have relatively small combustion chambers usually in the mid to low 70s, so the piston would need a 35 cc dish.

The bottom end would consist of a forged crankshaft with a 4.500” stroke with big block Chevrolet connecting rod journals, 6.700” connecting rod, with a 4.390” bore yielding 545 cubic inches. The cylinder heads we used had 72cc combustion chambers and with the bottom end combination the compression ended up at 10.6:1.

For the intake we choose a single plane with a Dominator flange because the customer wanted to use a 1050 cfm 4500 style carburetor. With no special modifications to the cylinder block and acquiring parts that were “as cast” such as cylinder heads and intake manifold, the dyno numbers were quite impressive.

Other than checking all clearances and having a custom ground camshaft and a nice oil pan the engine was more than enough for this F100 on pump gasoline. The only custom piece on the entire build was the headers, which had to be fabricated to fit the truck chassis. As you can see from the dyno chart at left, a 460 stroker engine has a lot of merit for performance use.

I’ve found that it is always an enjoyable venture when dealing with different engine builds because each one has its own history. The 385 series engine was a sure win for those individuals who appreciate Ford performance.

Advertisement
In this article:Ford, stroker

What to Consider for Valvetrain Selection