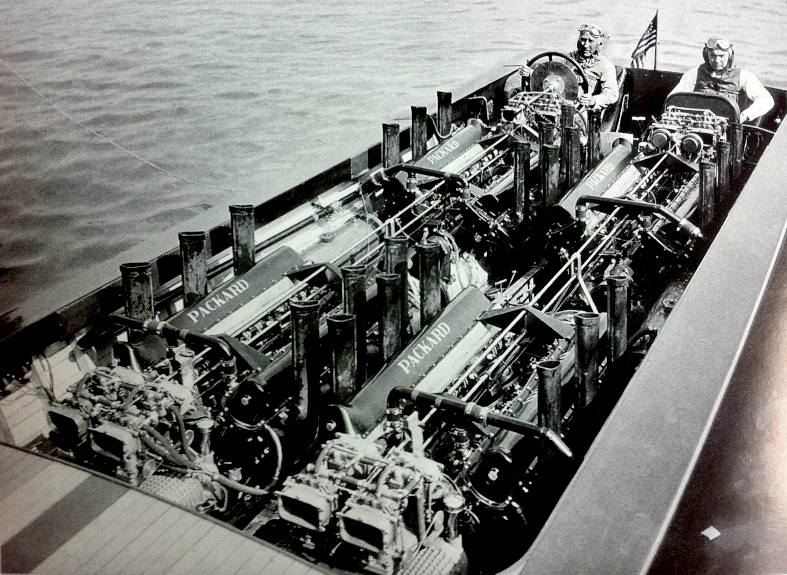 Garfield Wood never intended to go into the boat building business. His goal in life was to personally set every speed record on water and be recognized as the world’s speedboat king. 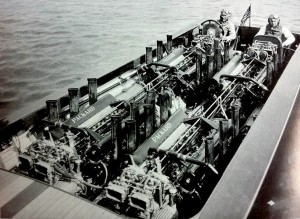 The business end of Miss America X – Yes, this is one boat!

Garfield Wood never intended to go into the boat building business. His goal in life was to personally set every speed record on water and be recognized as the world’s speedboat king. However, a need for speed on the water came about at an early age working with his father.

Garfield Arthur Wood was born December 4, l880, the oldest of what would eventually be l3 brothers and sisters in Mapleton, IA. He was named after both the Nation’s President and Vice President, James Garfield and Chester Arthur. Soon after Gar was born the family moved to Minnesota.

Gar’s father worked as a ferryboat operator on Lake Osakis in Minnesota and often took his oldest son with him to help crew on the ferries. Races between ferryboat operators would often develop. It was good for business to have a reputation for speed, so races were often taken seriously. Young Gar Wood learned early that speed on water meant recognition and fame.

Working with his father, Wood also developed strong mechanical skills far beyond his years. More important still was the development of an aptitude for inventing devices to solve mechanical problems. These skills would continue to develop within him and result in hundreds of patents issued to him during his lifetime. However, one invention early in his life (and the resulting patent) would result in Wood amassing a personal fortune and allow him to become the speedboat racing legend he so desired. 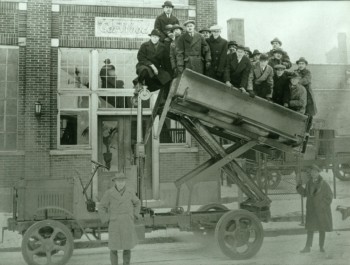 This is the unlikely start to a speedboat racing career.

By the turn of the century Wood and his wife Murlen lived in St. Paul, MN, where he was involved in a number of struggling enterprises including a traveling repair shop to service machines and early automobiles. Then in 1911, at age 31, fate intervened as he watched a truck driver laboriously unloading two tons of coal with a hand-operated lift.

After listening to the poor fellow curse his fate about having to perform such dirty and heavy work, Gar saw an opportunity. He began focusing all his creative skills on a mechanical device to unload coal trucks. He soon had a working solution, and convinced a local coal company to lend him a truck to try out his new invention.

With Murlen by his side, and their life savings invested, Wood demonstrated his hydraulic lift to local investors who insisted on getting in the truck bed to see how it worked. When he dumped them all into the street with the pull of a lever, they knew he had a marketable product.

The demand for the hydraulic lift was so great that Gar’s eight brothers joined him and they expanded and moved everything to Detroit where they established the Wood Hoist Co. alongside other emerging giants like Henry Ford. Wood’s fortunes grew and by the age of 40 he was a multi-millionaire, and the time was right for him to get reacquainted with his first love, speedboat racing.

At the 1916 noonday meeting of the Detroit Exchange Club, Lee Barrett secretary of the Miss Detroit Powerboat Association made a plea for some local Detroiter to help out the syndicate and purchase Miss Detroit I.

The man who stood up, of course, was Gar Wood.

After he agreed to purchase Miss Detroit, Wood left for Algonac to see what he had bought. While there, he bought the Chris Smith and Sons Boat Company. For the next six years Smith built racing boats under the direction of Wood and, as a team, won five straight Gold Cups from 1917-1921 and two Harmsworth trophies in 1920 and 1921.

In 1921, politics and influence won out over speed as the determinant of success on the water. Wood had proven himself unbeatable, so the American Power Boat Association (APBA) changed the rules. Along with other new restrictions, boats entering a Gold Cup race could no longer utilize the new hydroplane hulls nor use engines with more than 625 cubic inches of displacement (for “safety” reasons).

The APBA announced the intent of their new restrictions: to encourage construction of so-called “Gentlemen’s Runabouts,” that would enable more gentlemanly uses of the boats when not racing. The APBA decision had important and interesting ramifications for Wood and Colonel Jesse Vincent, chief engineer for Packard. In 1922, a Packard Model 1237 V12 aero engine (with 6 of the 12 engine’s cylinders removed) was installed in one of Wood’s race boats for the newly regulated Gold Cup trophy race. One half of 1,237 cubic inches is 618.5 cubic inches – just under the new APBA regulations. Vincent defeated Wood using the Packard engine in Wood’s boat, thus ending Wood’s domination of the Gold Cup permanently.

Gar then focused on unlimited competitions, like the Harmsworth Trophy. He took this trophy home nine times and retired undefeated. He was the undisputed speed king on water.

Miss America X was the first boat to travel faster than two miles per minute on the water when it topped out at 125.42 mph in 1932.

While his Miss America IX had the honor of being the first boat to travel over 100 mph on water, Wood figured that the British contingent was going to throw the kitchen sink at him in 1932 – they wanted their trophy back that badly. He was right, and the Brits got Rolls-Royce on board bringing their most stout effort yet.

Knowing that the big Rolls motor was more capable than his V12 Packard pound for pound, his idea was to simply bludgeon the water and the competition to death. Rules allowed for boats to be 40-feet long.

Miss America X was almost 39-feet-long and 10-feet-wide and weighed a portly 8 tons! The boat was designed and built around the four giant Packard V12 engines, each capable of producing 1,600 hp.

Wood and his riding engineer/mechanic sat at the extreme rear of the boat behind the four engines. Each of the engines was linked inline and each powered its own propeller. Packard engineers were convinced that there was no way to keep the engines together while linked, but they worked to time them perfectly and made them happy operating as two 24-cylinder monsters. Wood designed the gearbox that the engines were hooked to because again, the Packard engineers said that there was nothing available suitable for the loads they would be experiencing.

The boat itself was constructed by Nap Lisee, the designer responsible for all of Wood’s Miss America boats and an immense talent in the boat design industry. Lisee ordered big spruce lumber from Oregon, which he used for the stringers in the hull. The rest of the boat was made of mahogany.

The four Packard engines (each weighing close to 3,000 pounds) consumed nearly 10 gallons of fuel per mile at full throttle of 2,000 rpms. Miss America X became the first to travel more than two miles per minute on the water and topped out at 125.42 mph in 1932.

As Gar had wished, Miss America X completely humiliated the British Rolls-Royce powered entry to the point that Rolls got out of powerboat racing. The following year Wood ran the same boat and the British came back with a smaller craft with a less powerful engine and made a race of it, but Wood again cleaned house.

He retired from motorboat racing following that event to focus on his ever-growing business interests. Gar Wood lived to be 90 years old and passed away in 1971, but not before reaching his goal of being crowned Speedboat King.

From a Dump Truck Dynasty Came a Speedboat King