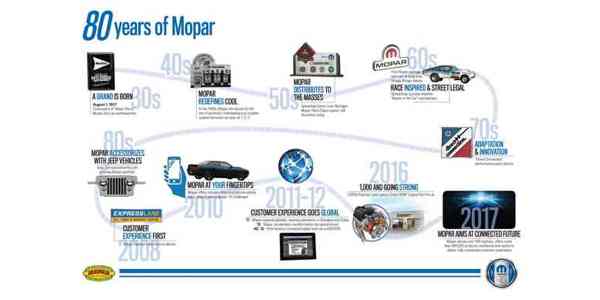 The Mopar brand, born on August 1, 1937, as a contraction of the words “Motor Parts,” celebrates 80 years in 2017, marking an amazing evolution over eight decades. First introduced as the name of a line of antifreeze products, the Mopar brand has since transformed to encompass total service, parts and customer care for FCA vehicle owners around the globe.

The Mopar brand, born on August 1, 1937, as a contraction of the words “Motor Parts,” celebrates 80 years in 2017, marking an amazing evolution over eight decades. First introduced as the name of a line of antifreeze products, the Mopar brand has since transformed to encompass total service, parts and customer care for FCA vehicle owners around the globe.

“The Mopar brand holds an unparalleled place in the automotive world, possessing name recognition, scope of service and passionate enthusiasts unmatched by any other service and parts organization in the industry,” said Pietro Gorlier, Head of Parts and Service (Mopar), FCA – Global. “From humble beginnings as a simple name for antifreeze products, now the Mopar brand reaches customers in over 150 markets offering parts, service and innovative care throughout the whole customer journey.”

After its introduction in 1937, the Mopar brand quickly began to stand for more than just antifreeze. The brand made a name for itself in the muscle-car era of the 1960s, cementing a legacy on the streets and at the dragstrip that by decade’s end would have owners referring to their vehicles as “Mopar” cars.

Over the last decade, Mopar has pegged the needle in its push to transform into a global service, parts and customer-care brand for all FCA vehicle owners. In 2008, Mopar Express Lane service, offering fast oil changes and more, was introduced at dealerships, with more than 1,000 operational today in the United States, and more than 1,750 open in more than 20 countries around the world.

Construction is in progress on two new Mopar Parts Distribution Centers (PDCs) in the United States, adding to the brand’s current network of more than 50 PDCs established to service the more than 500,000 products in the Mopar portfolio.

In the last decade, Mopar has blazed a trail with a number of industry firsts, including the first smartphone vehicle-information apps, in-vehicle wireless charging and factory-connected tablet technology in the service lane via Mopar wiADVISOR. The Mopar brand also introduced a series of limited-edition Mopar vehicles built at the factory, beginning with the Mopar ’10 Challenger. A new special-edition Mopar vehicle has been introduced each year since, the most recent being the Mopar ’16 Ram Rebel, with 3,650 limited-run Mopar vehicles sold since that first in 2010.

On the product side, in conjunction with the Jeep® brand, Mopar created a new Jeep Performance Parts line to deliver trail-ready parts to off-roaders. In late 2016, new Mopar Crate HEMI® Engine Kits were brought to market, enabling enthusiasts to drop modern HEMI power into classic, 1975 or earlier, rides.

Celebrating 80 Years of Mopar
Throughout 2017, the Mopar brand will mark its 80th year with a large slate of initiatives, including limited-edition anniversary vehicles, 80th anniversary-themed service, parts and customer-care offers for customers, special merchandise, events, celebrations and much more.

The year-long celebration will kick off at the 2017 North American International Auto Show (NAIAS) in Detroit, January 8-22. Befitting the brand’s global expansion, media and industry leaders from around the world will have the opportunity to experience the start of the Mopar brand’s yearlong birthday party and to view the 80th anniversary-themed Mopar Garage NAIAS display.

Advertisement
In this article:80 years, Mopar