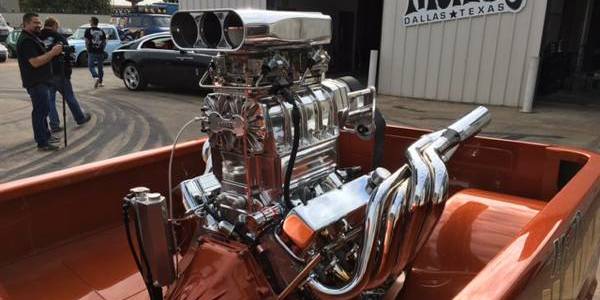 Jammie Wells was asked to build a Ford big block engine for a Ford Econoline. However, this wasn’t your average customer. This was a build for Richard Rawlings of Gas Monkey Garage and Hot Wheels. 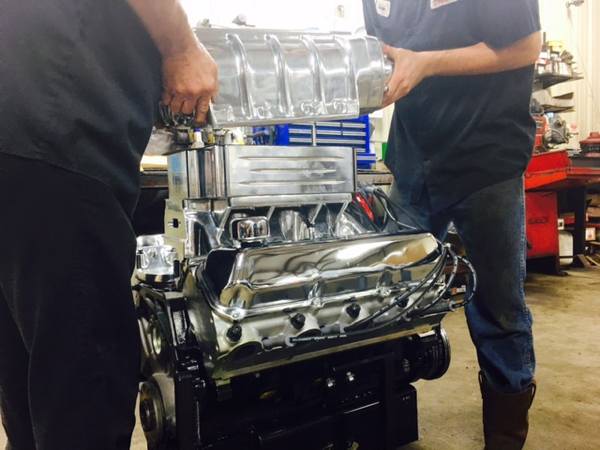 When Richard Rawlings and the crew of Gas Monkey Garage call you up for an engine build to be placed in a car featured on Fast N’ Loud, you don’t say no. Jammie Wells, owner of WCH Racing Engines, didn’t say no either. In fact, his shop has been working with the popular Discovery Channel TV show for a while now.

In each episode of Fast N’ Loud, motor mastermind Richard Rawlings and his team search the corners of Texas and surrounding states for forgotten and derelict classic cars to buy and restore at their Gas Monkey Garage in Dallas. Jammie Wells and WCH Racing Engines come in when its time to build the engines. 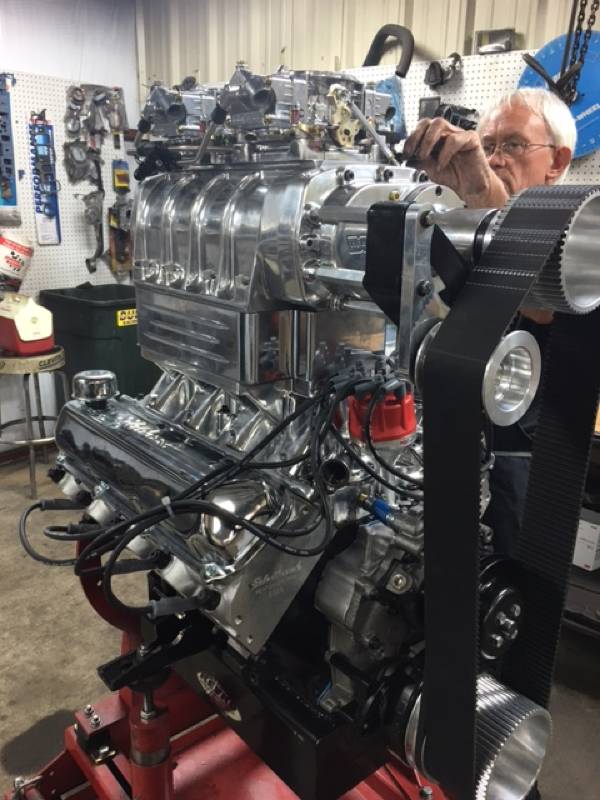 This particular engine is from a second build the show did for Hot Wheels. It is an E385 series 460 cu.-in. Ford big block that was bored to 520 cu. in. “It’s a phenomenal engine,” says Wells, whose shop is also in the Dallas area in Midlothian, TX. “It’s insane.

“Gas Monkey called me and told me they were building a Ford Econoline for Hot Wheels and that he wanted a big block Ford as the engine,” Wells says. “Gas Monkey didn’t care if it was a 460 cu. in. or whatever. However, the engine was going to have an 871 Weiand blower and a blower spacer from Alkydigger. For buying the parts for a 460 to handle the power a blower motor is going to make, I told them we might as well up the cubic inch to 520 and have nice parts inside from beginning to end. They said, ‘Sure.’” 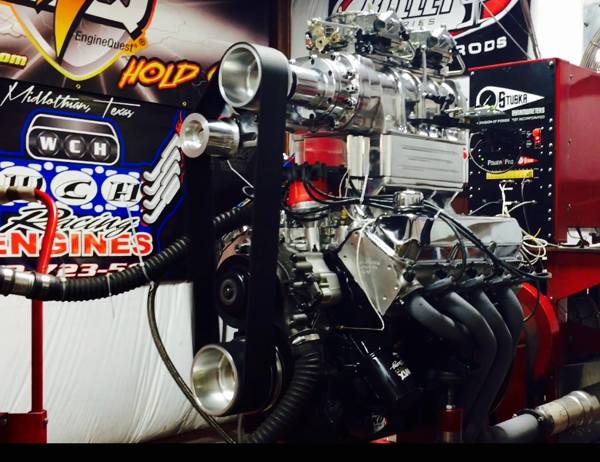 The blower spacer, the Weiand blower itself and the scoop on top give this engine another level of shock and awe. This element of the build also presented a few obstacles for Wells and his team.

“One of the biggest obstacles we ran into was with the big block and the Weiand blower,” he says. “They make kits for Chevy, but they don’t make kits for Ford. Everything had to be fabricated in-house to make the pulleys work, the belt work and everything else. We had to modify the balancer and lower pulley so that it would fit and so that the clearances were correct.” 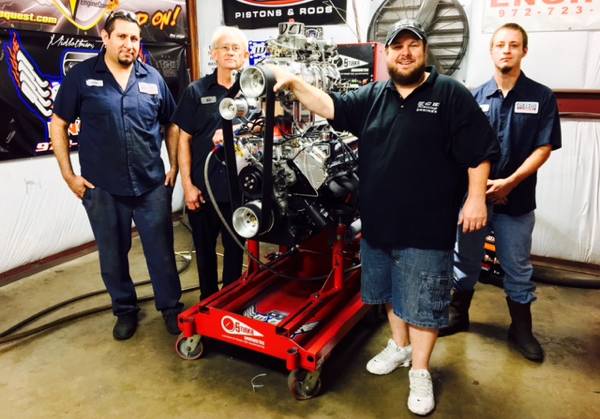 Jammie Wells (third from left) owns WCH Racing Engines in Midlothian, TX. Here he poses next to the Ford engine with his team.

Aside from the cool factor the blower provides, this engine was installed into the back of the Ford Econoline, and it was installed backwards. These extra wow factors meant Wells had to use an oil pan from a boat.

“The motor is backwards inside the back of the truck, so Kevko had to make a pan for us,” he says. “The guys building the car were concerned about how low the pan was going to hang because the car was so low to the ground. So Kevko had to specially make the pan.” 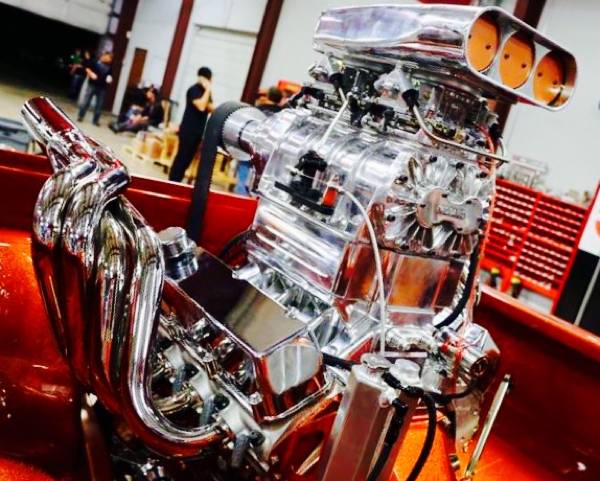 Inside the engine, WCH did a full port job and port matched all the ports to the intake manifold. The pistons came from CP-Carrillo, which Wells says presented a bit of an issue.

“I have to take my hat off to CP-Carrillo because the pistons we needed weren’t in stock,” he says. “Getting the pistons here in time was one of the biggest things we needed. They rushed the order through for us.” 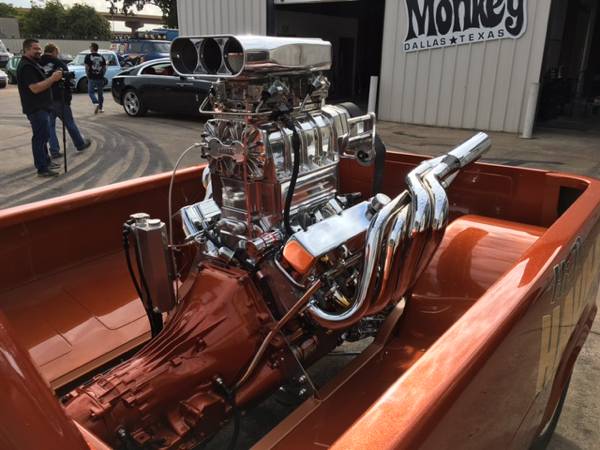 The engine also has an Eagle Specialty crank that was double keyed, and Eagle Specialty H-beam rods. Wells used COMP for the cams, rockers, lifters and the whole valve train. The engine has Holley carburetors, a timing cover from EngineQuest and Edelbrock cylinder heads. However, Wells didn’t use any of the Edelbrock components. “We tore all the valves out of it and used Manley instead,” he says.

From the time the block came in the door until the engine left WCH Racing Engines was about three and a half weeks. All of the work was done right there at WCH, and some of the fabricated parts were sent out to be dipped in chrome. 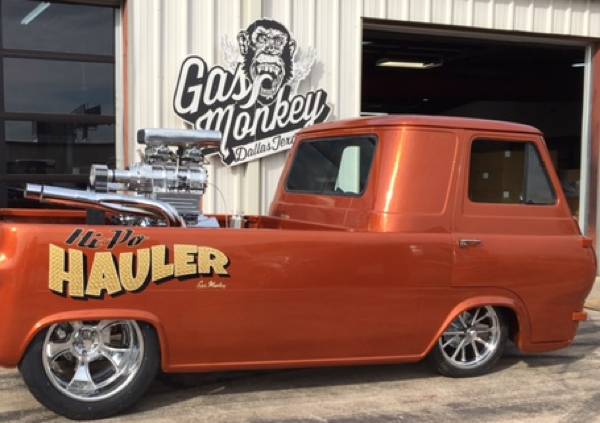 “The whole thing was for shock and awe,” Wells says. “We wanted people to see it and say, ‘Holy cow, look at that.’”

Sitting in the bed of a Ford Econoline truck, this engine certainly gets people saying, ‘Holy cow,’ especially once you know it makes 750 hp and just shy of 750 lb.-ft. of torque. It’s another great build for WCH Racing Engines, and seems to be a perfect fit for Hot Wheels. 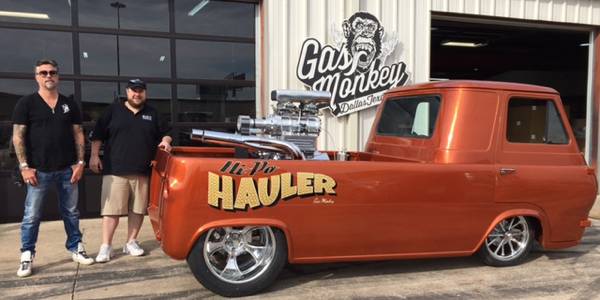