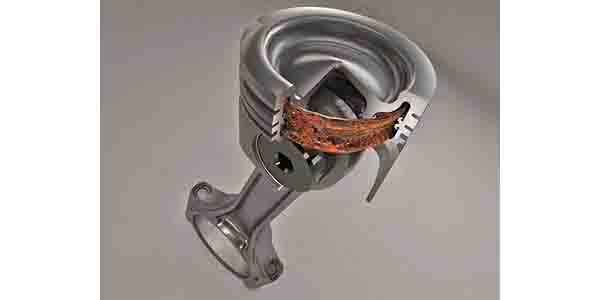 We asked various aftermarket piston and ring suppliers what type of questions commonly arise when a customer is buying a set of pistons or rings for an engine.

Just because you’ve been building engines all your life doesn’t mean you know everything there is to know about pistons and rings. We asked various aftermarket piston and ring suppliers what type of questions commonly arise when a customer is buying a set of pistons or rings for an engine.

1.  If you are ordering custom pistons for an engine, get the rings first and then order your pistons.  Depending on the diameter of the pistons and bores, off-the-shelf rings may or may not be available for your application.

If the application will require custom rings, your ring supplier will need as much information about the engine as you can give them. In addition to obvious things like bore diameter and desired ring thickness and ring tension, they may also want to know what type of fuel the engine will burn (gas, alcohol, nitrous or nitromethane), if the engine is blown or turbocharged, and what type of racing the engine will be used for.  All of these factors will influence the type of rings that will perform best in your application. 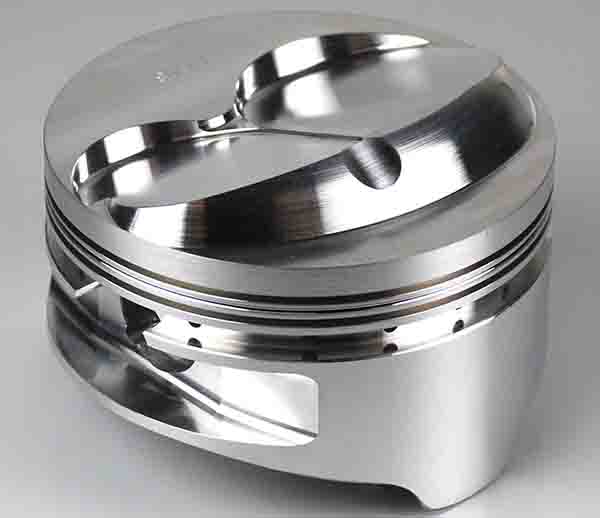 Domed pistons are great for increasing compression, but the valve pockets may have to be made deeper depending on cam lift and clearances (courtesy of Ross Pistons).

Most importantly, listen to their advice. Like your favorite jewelry store, manufacturers and suppliers are the ring experts. They know which materials and which ring designs and facings will best match your application.

Once you’ve determined which rings will work best in your motor, you can then go to your piston supplier to work out the details of your custom pistons. The piston supplier can then determine how deep and wide the ring grooves should be to match the rings you will be using.

Some piston manufacturers make pistons that are machined with such a high degree of accuracy that they say you can run as little as .0004˝ of side clearance with a good set of rings!

However, if the rings fit too tightly in the grooves, there may not be enough gas flow to get behind the rings to push them out against the cylinder wall, resulting in ring flutter, a poor seal and loss of power.

At the recent Advanced Engine Technology Conference that preceded last year’s Performance Racing Industry show in Indianapolis, George Bryce of STAR Racing gave a seminar on big bore high RPM engine building. He said most engines will start to lose horsepower at high RPM because of ring flutter long before they experience valve float. He recommend using the lightest rings possible to reduce weight, and adding gas ports (vertical or horizontal) to the pistons to help keep the rings sealed.  Adding gas ports can allow you to use somewhat tighter ring side clearances.

Bryce also recommends using pistons that have an accumulator groove between the first and second ring. Gas trapped in the accumulator groove will help maintain ring seal at high RPM. Another recommendation is to use a shallower crosshatch in the cylinder bores if you are building a high revving engine.

Gas ports in the pistons can help route combustion gas behind the top ring for a better seal, but it’s a trick that’s used primary on the race track, not the street. Vertical gas ports tend to clog with carbon, which may result in uneven gas pressure behind various areas of the top ring. Some engine builders say they prefer to use horizontal gas ports or small horizontal “D-shaped” cutouts machined into the top ring groove land around the circumference of the piston to get more even pressure behind the top ring.

3.  Ring back clearance can also affect ring sealing. As combustion pressure pushes down on the top ring and flows behind it, it quickly fills the void behind the ring to push the ring outward against the cylinder wall. If the void under the ring is too small, there may not be enough flow to achieve good ring control and sealing.

Let’s say you have a ring that is .170˝ thick and a piston groove that is .195˝ deep. Subtract the ring thickness from the groove depth and you get .025˝ of space behind the ring.

The important point here is to make sure you have at least .005˝ of back clearance between the underside of the ring and the bottom of the piston groove, and preferably .007˝ for good gas flow and ring sealing.

According to lab tests performed by one piston and ring manufacturer, running a larger back space clearance behind the top ring seems to have no negative effect on ring sealing. Combustion pressures are so high and push gas behind the rings so quickly that the volume of the void behind the rings doesn’t matter.

This means you can safely run thinner steel rings in place of cast iron rings on the same piston and get better sealing even if the back spacing is greater. Low tension steel rings are about a third stronger, a third lighter and much more conformable to the cylinder walls than cast iron rings, so you end up with a better seal, better high RPM control and longer ring life.

4.  A lot of people worry excessively about ring end gaps. The end gap provides clearance so the ring can expand as it gets hot without the ends butting together and causing a problem. Some engine builders worry that if the top ring end gap is too wide, they will lose compression through the gap causing blowby and loss of horsepower.

A “gapless” style top ring is one way to eliminate an “open” gap altogether. But even gapless rings have recommended end gaps for the upper and lower sections of the ring. The end gaps will depend on the application, and should be staggered 180 degrees from one another to assure the best possible seal.

Regardless of the type of rings used, you obviously need a certain amount of end clearance to accommodate thermal expansion. The more heat the engine produces, the greater the end gap that’s recommended. Common recommendations for top ring end gaps in a 4-inch bore include .016 to .018˝ for moderate performance, .018 to .020˝ for drag or circle track racing, .028 to .030˝ for drag nitrous, and .024 to .026˝ for supercharged or high boost turbo.

Common signs of insufficient end clearance and butting end gaps are scuffed ring faces, damaged rings and cylinders, and shiny areas on the butt ends of the rings.

Ring end gap is measured by inserting a ring into a cylinder bore about an inch from the top, and using a feeler gauge to measure the clearance between the ends of the ring. If the end gap needs to be widened, you file or grind the ends of the ring. The ends of the gap should also be carefully deburred with a fine stone before the rings are installed.

A common recommendation is to run a somewhat wider end gap on the second compression ring if you are building a performance engine (about 1.25 times wider). Testing has shown that a slightly larger second ring end gap usually improves top ring stability and sealing at higher engine speeds by venting excessive pressure that builds up under the top ring. But this recommendation can vary depending on the application.

5.  Ring seating depends on the cylinder wall finish, whether or not the rings have been lapped at the factory, and the type of facing material on the rings (plain, chrome, moly or nitride). Always use the type of honing stones and procedure recommended by your ring supplier. A plateau finish is always best and allows almost instant ring seating within minimal break-in and wear.

Always use a break-in oil when breaking in the rings on a new engine, and change the oil after the initial dyno tuning session. Also, varying the engine speed and load during the break-in period is important for rapid ring seating. 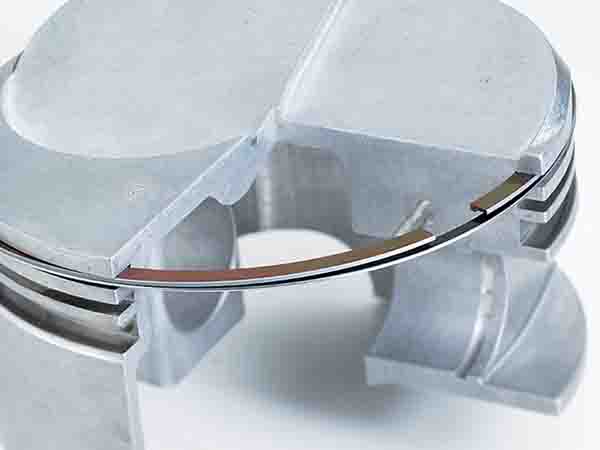 6.  Piston geometry is important not only when choosing off-the-shelf pistons, but also when ordering custom pistons.  Most pistons have a barrel shape that changes from the top to the bottom of the piston skirt. The hotter the application, the more barrel the piston may need to not scuff in its bore.

In addition, piston skirts are not round but oval to allow for expansion without scuffing.

7.  The thickness of the ring lands is also important. Since pistons are exposed to extreme heat from combustion, extra clearance is added to each land to allow them to expand closer to the bore size without scuffing. In general, the closer the ring land is to the top of the piston, the smaller in diameter it will be to provide the necessary clearance. One exception is the third ring land (above the oil ring groove), which is often reduced in diameter more than necessary to aid in transferring oil off the cylinder wall and into the oil ring groove.

8.  Selecting the proper wrist pin and proper thickness is a critical component. If the wrist pin is too thin, the piston will be exposed to additional stress which can cause piston cracking, pin bore wear, or even failure.

Look closely at the piston pin bore  for dark gray wear near the lock and wrist pin or excessive pin wear near the rod as indicators of insufficient wall thickness. If either of these are present, you need a thicker pin.

A simple tip to get the most out of your existing wrist pin is to ensure the side clearance between the piston pin boss and small end of the connecting rod is not excessive.

The location of the wrist pin in the piston is also important. Most stock engines have the pin slightly offset to reduce piston slap and noise. But in a race engine, a center-mounted pin will be more stable at high RPM.

9. Modifying piston valve reliefs is often necessary with oversized valves and high lift cams. You can make such modifications, but it may be safer to have your piston supplier make the changes. It’s important to measure the thinnest point to the piston undercrown or ring groove to make sure there is adequate thickness prior to cutting the piston. In some cases, it isn’t possible to measure this without cutting a piston in-half or computer modeling. Most piston suppliers recommend a minimum thickness of .050˝ under the thinnest point of the valve relief.

10.  Diesel pistons are not the same as those for most gasoline engines. Diesel engines are ultra high compression, high heat engines that demand a lot from pistons.  Compression ratios are typically in the 16:1 to 20:1 range, which improves thermal efficiency and fuel economy but creates more pressure.

Most diesel pistons are cast aluminum with a steel insert for the upper ring groove to prolong ring life. Lighter weight billet or forged aluminum pistons are also available for racing, with most being anodized to improve life and wear resistance.

Advertisement
In this article:Piston Rings, pistons