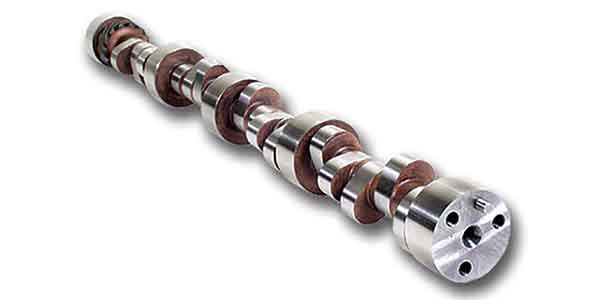 Anyone who has an extensive collection of automotive magazines from years past, or access to the internet for that matter, has seen more articles about camshafts than they could probably keep count of. I am by no means insinuating that’s a bad thing because having so much written over such a long period of time has familiarized even the most casual auto enthusiast with the terminology associated to this particular engine component. Interject the words lift or duration into any conversation pertaining to engines and just about everyone knows what you are referencing.

If the discussion is taking place among experienced engine builders then you’re pretty much guaranteed that someone will be able to share information about a particular build or application and everyone can benefit from that knowledge because there is no such thing as too much info in this business.

Often in these conversations the topic will turn to a new camshaft from one or more of the manufacturers and that usually morphs into a debate over the merit of the new design at which point the question, “just how many ways can you grind a camshaft?” usually arises. For the most part, it’s a legitimate question. Let’s face it, we’re still dealing with the same basic component of the four cycle, internal combustion engine that Henry Ford used in the Model T to open and close the valves. Therein, though, lies the answer: it’s not about the current state of cam technology…it’s about the current state of new development on the engines that the cam controls.

There are numerous aspects involved in designing an engine combination. Displacement, compression, airflow, etc., and it is the camshaft’s job to ensure that all of these work together properly to achieve optimum performance. That’s why the cam is often referred to as the “brain” of the engine.

In order to put that into some type of context, let’s look at cylinder heads for an example. Twenty-first century cylinder head technology is nothing short of phenomenal. Even the most cost-effective, entry level heads are so much more efficient than earlier designs, they require a different style camshaft because certain fuel or airflow deficiencies no longer have to be accommodated for by the cam. When we look at modern casting techniques, combustion chambers, valve angles and more, we can get a clearer picture of the changes that camshaft manufacturers make in order to evolve in conjunction with advancing technology of other areas of engine design.

Another example would also be the compression ratios that are utilized in a modern engine. If we take a generalized look across the board, everything from four-cylinders to V8s is averaging close to 10-1 or even higher. It wasn’t so long ago that the majority of passenger car engines were running in the 8.5-1 range. I understand that these are somewhat loose numbers but again, it shows another parameter of engine function that is directly related to camshaft specifications.

I want to pause at this point to acknowledge the fact that changing engine designs aren’t the only factors that affect camshaft development. On the contrary, cam manufacturers are constantly working to produce products that offer many benefits such as increased reliability with better materials, enhanced performance levels that still offer good drivability characteristics, cam gear/distributor compatibility improvements (for engines that still use a distributor) along with an entire host of associated valve train components.

Looking through the catalogs at the current shelf stocking grinds available from the various manufacturers, you will likely see an increased number of single pattern cams (we’ll get into more on that in a minute) or split duration cams that have an equal amount of valve lift on the intake and exhaust. Along with that you will also find a greater selection of camshafts for competition applications that have more lift on the intake valve than the exhaust. If all of these don’t offer enough options to quench your thirst for cam specs, we’re going to discuss four pattern camshafts too.

Before we wade too deep into the performance pool there is one thing to keep in mind: the guidelines that we are discussing are just exactly that, simply guidelines, and should not be the sole consideration when choosing a camshaft. Aside from the type of cam and your lift and duration figures, the additional specs that must be determined are the actual valve timing events, lobe separation and how much overlap you will need.

If I were to make a recommendation on where to actually start when determining cam specs, I would strongly suggest getting the flow numbers of the cylinder heads that you will be using and begin there. After acquiring those, work out the remainder of the engine build on paper and then you will have all the required info to make certain that the camshaft will be the best possible fit for the engine. If you are unsure about a particular area of engine function regarding the camshaft, you can contact your cam manufacturer of choice and they will be glad to help sort it out.

We’ll start with single pattern cams. One of the reasons you see an increase in the number of these grinds is due to the very efficient cylinder heads that we have available. If your heads have a good intake/exhaust flow ratio, then utilizing a single pattern cam will make more torque in the lower to mid RPM range as opposed to a dual pattern.

One area of application where they work very well is in circle track engines. If you have two identical engines, producing the same power, but one is able to make torque at a lower RPM, it will begin pulling earlier coming off the corners. Another reason is that most oval track cars are utilizing an exhaust system that has very little restriction so there’s no need to increase exhaust duration to help scavenge the chambers of spent gases. The same can be true for street driven vehicles that have a free flowing exhaust and we all know how well torque works to move the vehicle from stoplight to stoplight! 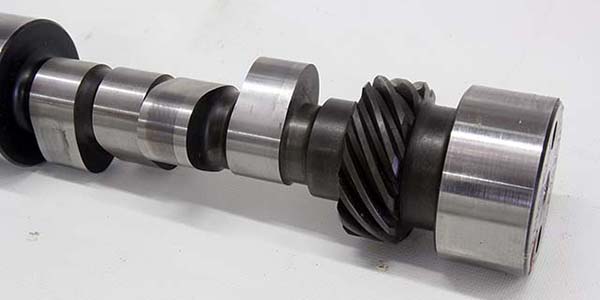 Dual pattern camshafts have been employed in just about every type of engine combination imaginable and have had a long standing success rate in the performance industry. Early on, most of the cam designs used by the factories were single pattern styles and cam grinders and racers alike started increasing exhaust lift and duration to make more power from the engine designs of those eras.

Some of the applications that best benefit from a dual pattern design are engines that have a weaker flowing exhaust port in the head or restrictive exhaust system, vehicles using an automatic transmission and heavier cars/trucks that have smaller displacement engines. Supercharged and nitrous engines also respond well with them. From a competition stand point, drag engines can use a dual pattern to help aid in the power delivery with reducing the chance of wheel spin early in the run by bleeding off some of the lower end torque.

Another “twist,” if you will, to the dual pattern cams would be the increasing number of designs that have a larger lift specification ground on the intake lobe versus the exhaust. Generally, these are used in full competition applications and usually have a LSA of 110-112 degrees and higher in conjunction with a change in the firing order of the engine. Again this is a step to take advantage of modern high performance cylinder heads which have extremely efficient exhaust characteristics and an effort to pack more of the fuel charge into the intake port.

Using four lobe profiles allows you to provide more duration for the four corner cylinders of the engine compared to the four center cylinders. The additional duration is there to aid cylinder filling since the longer runners require more time to fill than the shorter ones. Each set of lobe profiles utilizes specific intake and exhaust timing. The inboard cylinders use the same grind while the outboard cylinders have an intake opening point that is delayed two degrees and the exhaust opening event comes in two degrees earlier.

Using a four pattern cam can raise the volumetric efficiency and power of the engine by improving cylinder to cylinder airflow. These types of cams have been in use in competition applications for many years but are now readily available for various engines.

Hopefully this has provided you the basic “meat and potatoes” comparison of the different characteristics between camshaft designs. If you wish to delve more deeply into various lobe configurations, core selection, LSA’s, etc. you can contact any of the camshaft manufacturers and request a copy of their master lobe profile catalog. There are also software programs available that allow you to see how various changes in valve timing, overlap and other factors will affect the power curve of your engine combo so jump in, start crunching numbers and have fun!

Tim Allen has spent nearly his entire life around engine parts and credits his father with instilling a passion for machining and building. Currently Technical Manager with Liberty Engine Parts, Tim has experience in the machine shop and the warehouse as well as the racetrack and the classroom. He can be reached at [email protected]

Steve Morris Engines builds engines for Manny Alvarez of HPP Racing. Manny was recently telling Steve that one of his engines was breaking valvetrain components after just a couple runs. Steve had built him a different engine that had been super fast and super reliable, so Steve asked Manny to send the other engine back 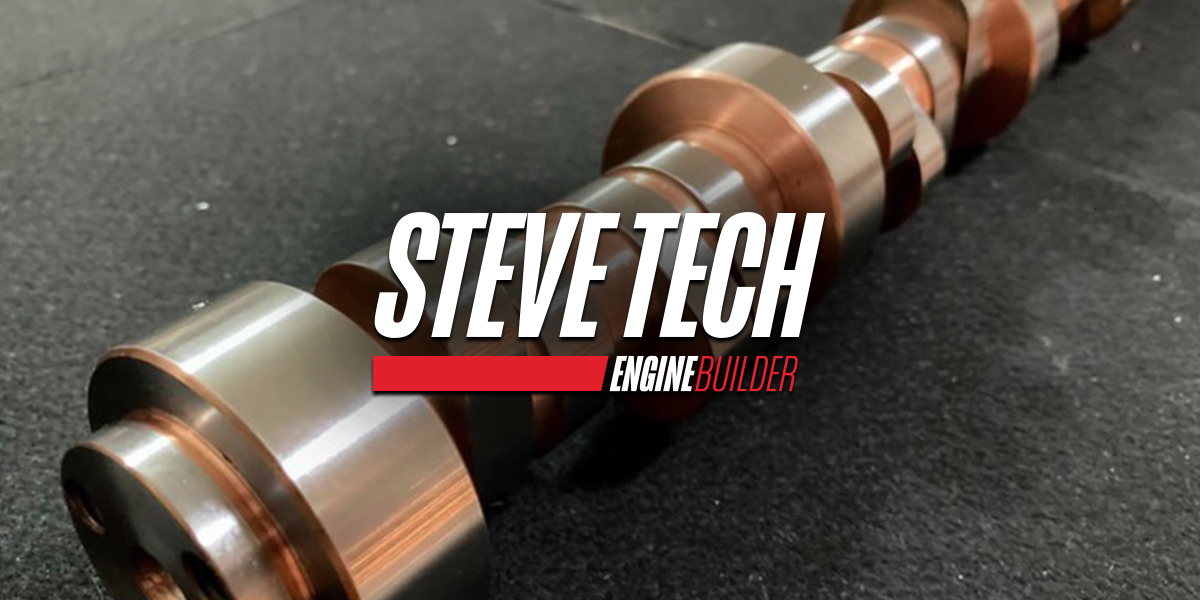 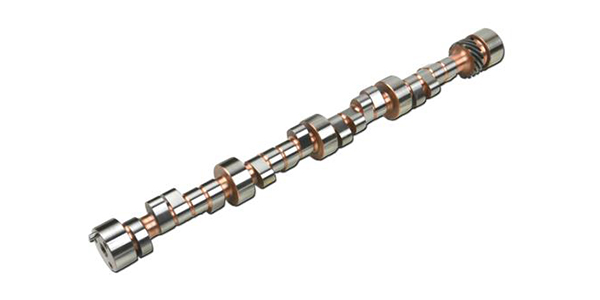