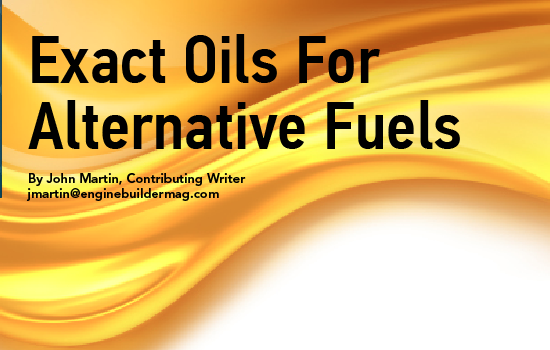 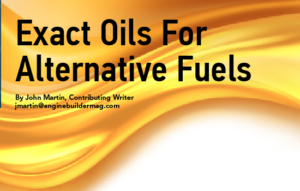 We may not think of racing fuels as alternative fuels, but ethanol, methanol and my personal favorite, nitromethane, are all alternatives to gasoline.

Ethanol and methanol, both alcohols, were first utilized in racing engines for two reasons. Alcohols generally have a higher octane number than gasoline so engine builders can utilize higher compression ratios when building engines for alcohol fuels. A 2-point increase in compression ratio (CR) can easily produce an 8-10 percent horsepower increase.

Another advantage gained when using alcohol fuels is cooling capacity. Alcohols have a very unusual latent heat of vaporization. As a result the intake charge on an alcohol-burning engine is significantly cooler than it is when burning gasoline. This lowers combustion temperatures, which in turn lowers heat rejection into the cooling system and NOx emissions. So you alcohol burners can claim you are emissions friendly or “green.”

The primary lube oil problem encountered when using alcohol fuels is water. Alcohols absorb water from everywhere, including humid air. The more water an alcohol fuel contains, the less horsepower it will produce per gallon of fuel burned. Be sure you keep your alcohol fuels in sealed containers at all times.

Alcohols also have a tendency to be aggressive to viscosity index (VI) improvers and some types of dispersants in typical lube oils. After each race, place a sample of used engine oil into a glass container. Allow the container to stand overnight. If the sample contains considerable fluffy deposits the next morning, you may have an alcohol-related problem.

Many racers just change oil after every race to minimize the amount of water in the oil and guard against additive depletion. You may also consider switching to a higher viscosity grade oil (e.g., from SAE 10W-40 to SAE 20W-50) to be certain you have sufficient lube oil film strength to protect vital engine components. Methanol is significantly more aggressive than ethanol.

Nitro is a horse of a different color. There is no finer music than the sound of a blown engine warming up on methanol being switched over to “pop.” The sound alone tells you that nitro burns almost uncontrollably as it tries to explode your power plant. Nitro burns at very high temperatures, so it easily breaks down oil additive chemistry. Nitro also produces very high brake mean effective pressure (BMEP) in the cylinders. If the oil film isn’t sufficient, nitro engines will literally push rod and main bearing materials out of the sides of the bearings.

All this stress is exacerbated by the fact that modern nitro racers also inject raw nitro into the cylinders after a burnout to cool the engine down before the actual run. This dilutes the oil as much as 25 percent, which further reduces the oil’s film strength and ability to protect the engine.

The only way to lubricate nitro engines is to run the thickest racing oil available (SAE 60 or 70 grade) and change the oil after every pass. Take a look at the used oil from a nitro burner if you have a chance. Nitro destroys oil just like it destroys engines.

Most alternative fuels dictated by EPA regulations to be used in your everyday cars and trucks aren’t extremely complex, so their lubricating oil requirements aren’t overly restrictive. Still, their individual needs must be addressed by the oil industry and engine manufacturers. Lubricating oil requirements for common alternative fuels are discussed below.

Biodiesel is required to be blended into ultra-low sulfur diesel (ULSD) fuel in many states. Biodiesel made from soybeans or reclaimed cooking oils are excellent alternative fuels because the fuel economy (and horsepower) deficits associated with using these fuels are the least of any of the drop in alternative fuels currently on the market.

But biodiesel has two properties one needs to be aware of. Plant-based biodiesel fuels have inherently less oxidative stability than ultra-low sulfur diesel fuel. That means lubricating oils for use with biodiesel fuels need to contain additional oxidation inhibitors in the oil to slow down the rate of oil oxidation. Fortunately, new API CK-4 and FA-4 specification diesel oils were designed and formulated with additional oxidative stability to prevent engine (primarily piston) deposit buildup when using ultra-low sulfur diesel (ULSD) fuel.

Ethanol, and any other alcohol such as butanol or propanol, has a property that puts tremendous stress on lube oils. All alcohols have an affinity for water. That simply means they will absorb water from any possible source including condensation. Water plus acidic by products of combustion equals sulfuric acid (H2SO4) and other bad actors. Acids will attack any unprotected metals and marginal seals in the fuel system. Older engines have a lot of problems caused by corrosion when utilizing ethanol fuels.

Modern gasoline engine oils (API SN) are designed to perform properly with up to 85 percent (E85) ethanol, but higher concentrations can still cause corrosion in older engines (pre 2011) because some components aren’t corrosion resistant. Most of the time oil temperatures in excess of 212 degrees can drive off the water in the sump. Problems are most prevalent when equipment is stored for longer periods of time allowing sufficient time for condensation to produce corrosion on critical engine components.

If your gasoline engine will be stored for any length of time, either store it with a fuel which doesn’t contain ethanol, add a fuel system stabilizer or use an engine oil which contains vapor phase rust inhibitors such as hot rod oils to prevent corrosion. Another method is to purge the engine’s fuel system prior to storage.

The various gaseous fuels in the marketplace (CNG, LNG, propane) place the least stress on lubricating oils because they are so clean. Gaseous fuels generally require very little detergent and dispersant compared to gasoline and diesel oils. However, gaseous fuels do place additional stress on lube oils due to their relatively high combustion temperatures. Fortunately, API SN oils for gasoline and CK-4 and FA-4 oils for diesel incorporate additional oxidation inhibitors over previous oils, so one can use these oils without any problems.

Why You Should Know How Different Fuels Need Different Motor Oils (But Proabably Don't!)