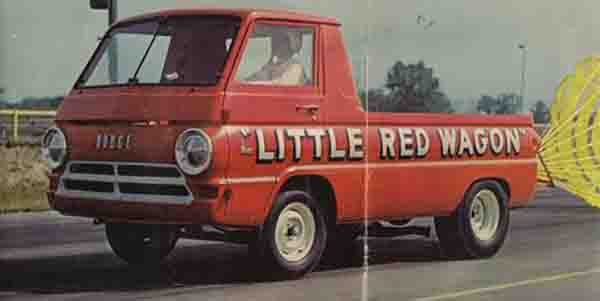 What would become known as “The Little Red Wagon” started out life as a 90-inch wheelbase Dodge A-100 compact economy pickup that was normally powered by a slant-six.

Sometimes in life you are rewarded. In my case my reward came with a telephone call from my then magazine editor who had arranged for me to spend the weekend with Bill “Maverick” Golden and the “Little Red Wagon.” This would be my chance to meet and interview Bill in person and get the story and facts straight from him. I was more than excited.

What would become known as “The Little Red Wagon” started out life as a 90-inch wheelbase Dodge A-100 compact economy pickup that was normally powered by a slant-six. The A-100 pickups were not exactly flying off of dealer lots. Chrysler needed some way to draw attention to the A-100. Enter one Frank Wylie director of public relations for Chrysler, who had the idea to put a Chrysler Hemi in the bed of the A-100 pickup.

The Little Red Wagon truck was originally designed as a “down runner.” Chrysler had the truck built for A/Factory Experimental, and it did break a record in an early outing. But the truck had a tendency to lift up the front wheels at speed, much to the delight of the spectators but not so much for the driver, who promptly quit mid season.

Meanwhile, Wylie decided to exploit the exhibition potential of the wheelie truck, and the “Little Red Wagon” was born.

Given a “parts deal” in 1960 to help support his ’60 Dodge Phoenix, Bill had done quite well in Southern California A/Stock competition. Powered by a 330-horse 383 sporting two Carter AFB 4-barrel carbs on a cross-ram intake manifold, the big black Dodge ran the quarter mile in 13.7 seconds at 103 mph.

To show appreciation for his efforts on its behalf, Chrysler representatives arranged for Maverick to try one of the factory’s brand-new S/SA ’62 Dodges with the more powerful 413 cubic inch Max Wedge V8 rated at 420 hp. It was in this car that Golden won the AHRA Winternationals at Fontana Drag City.

Here is a typical Maverick innovation: “The Torque-Flites on the 1960 cross-ram cars, automatically shifted out of second gear at 3,200 rpm due to a spring-loaded weight on the output shaft of the transmission,” Golden says. “Marvin Ford, a racing buddy and a stick guy, mind you, came by one day and told me of his idea to modify a few of these weights until we got the right shift point.

“We knew someone with a machine shop and had the work done, then I stayed up one night and tried ‘em all out on my ’60 Dodge. I’d pull the output shaft housing, change the weight, bolt the trans back together, then make a few runs down Long Beach Boulevard,” Golden recalls.

“I did this several times, working all night long. I lived in a trailer park at the time and the neighbors didn’t appreciate it, but I was merely checking to see where the transmission would shift out of second gear. Besides, it didn’t take long for a dual carbureted Max Wedge with 4.11 gears to reach 100 mph.

“I finally got the shift point just where I wanted it, and when that bugger hit third gear it’d absolutely crunch the ground. The modified weight made a four-car difference at the finish line, so I passed the tip along to the guys at Chrysler,” Golden says.

That wasn’t the only performance tidbit Golden was able to transfer from his cross-ram 383 to the Max Wedge 413. Besides low-drag piston rings, he sought to further reduce internal friction by running only enough valve spring pressure to reach 6,000 rpm.

“We ran about 110 PSI on the seat, while some other guys were running horrendous pressures of 140 to 150 psi,” he says. As for ignitions, “I always paid lots of attention to mine, ever since Gordon Williams showed me how to remove the big spring inside the distributor for instant full advance.”

And intakes: “One of the things we did to ‘trick’ up our engines in those days involved the intake ram tubes. The first 15 inches of the insides of these long intake runners were cut out, which effectively created a plenum chamber for the air/fuel charge, which absolutely changed the ram effect. Instead of peaking out at 3,200 rpm – which is why Chrysler had such a low transmission shift point – it screamed all the way to 5,000 rpm.

So at the end of the ’64 season, Frank Wylie, Chrysler’s chief of public relations, invited Maverick to Detroit.

“We went out to Dick Branster’s shop, home of the ‘Color Me Gone’ car, where I saw the first ‘Little Red Wagon,’ a Dodge truck with a big supercharged 426 Hemi sitting in the back on 30 percent nitro,” Golden says. “I ran an easy 130 mph test run the following day at Motor City Dragway in 27-degree weather. Another test run resulted in the truck running 140 mph at the 1,000-foot mark and almost flipping over backwards.

“After the weekend, Chrysler allowed me to take the truck back to California to take off the supercharger and pretty it up for a possible match race tour.”

It was Maverick who completely rebuilt the truck for drag racing, and designed the individual steering brakes to make the truck more controllable in the air.

With the engine set back in the bed and connected to the Chrysler Torque-flute automatic transmission, and the combination of the Hemi’s astounding torque and horsepower, it was easy to get the front end up in the air and as Maverick would discover, keep it up in the air.

“The nitro horsepower was very violent and really hit hard,” he says. “It was also hard on engine blocks and I would have to install a new block about every fifth run. I used to carry a 4 x 8 sheet of plywood that I would put on top of the bed at the hotel and would rebuild the engine in my motel room.

“I always left the old broken block at the hotel. Chrysler always sent a block ahead to my next track. I remember they cost $400 each in the 1960s. I went through a lot of them until I switched to alcohol. It took a while to figure out we did not need the big horsepower because of the position of the engine and the big torque numbers the Hemi created.

“There was a learning curve with the alcohol as well. I used to start the Wagon on the open trailer and back it off. More than a few times the alcohol would catch fire but because you could not see it burn I did not know there was a fire. I eventually learned to just load and unload the wagon by hand.

“I also learned after my first major crash to move the driver’s seat over to the middle of the cab. When the first truck rolled my arm flew out the window and the truck rolled on top of it. I almost lost my arm. I have learned something from every crash.

“There have been four Little Red Wagons with parts of previous ones and parts of the next ones. I have broken nearly every bone in my body at least once and some multiple times.

“What people do not realize is that there is no window or opening in the floor of the wagon. At the starting line I line up in the middle of the telephone poles and made sure the tape on the steering wheel was at 12:00.

“Also, I have to be ready for the wind gust that happens when I clear the grandstands, which block the wind gusts. If I am not on the brakes I will be headed for the guardrail before I can react.”

Bill seldom had an official pit crew and most often depended on local sponsors to provide help. In my case he thought I needed to experience what he did before every run so I worked beside him and followed his directions. He did three exhibition runs a day for both Saturday and Sunday.

On Saturday, I opened the butterflies and squirted in the fuel to start the engine, then got in his truck and towed him to the start line.

I was fine with that, and soon enough had my routine down and knew what to do when. Then Sunday morning, there was not much of a crowd so he said we should change places and he would show me how to turn on the fuel he would squirt the fuel and then he would tow me to the starting line.

Getting in was tough. You had to slide over the roll bar and between the braking levers to the seat and strap your self in. That was hard enough and I did not have a fire suit on.

When that Hemi starts the noise is deafening, the whole truck shakes and you quickly come to realize this is NOT as much fun as it looks. This is serious and there is a lot that can go wrong and none of it will end up in your favor.

To be honest I couldn’t wait to get out of the wagon. I helped him suit up and get in the truck on Saturday, but until you actually sit in the seat and see things first hand from his perspective, you have no idea what his day job is like.

To add to that, the fear and knowing first hand what happens when things go wrong and knowing you are driving Number Four Wagon, and you experienced first hand the crash of the other three.

I had a whole new respect for the man I thought I knew and had read about in magazines since I was in grade school. I can’t imagine doing this as a day job for more than 30 years.

We lost Bill in 2016. Not only was he a successful drag racer, he was an innovator figuring out ways to make his cars go faster using old-fashioned, seat-of-the-pants ingenuity.

He set numerous records both with his early stock eliminator entries and with the Little Red Wagon. The record he was most proud of was a Guinness Book Of World Records for the longest wheelie 4,230 feet or nearly the length of three football fields.

What I Learned From ‘Maverick’ Golden and the Little Red Wagon