To find out how CNC has transformed one shop, we spent some time with John DeBates of Auto Machine Inc. in St. Charles, IL. John and his brother Jim have been in business for over 40 years. John was our Machinist of the Year back in 1999, and served as chairman of the board of AERA from 2005 to 2006. 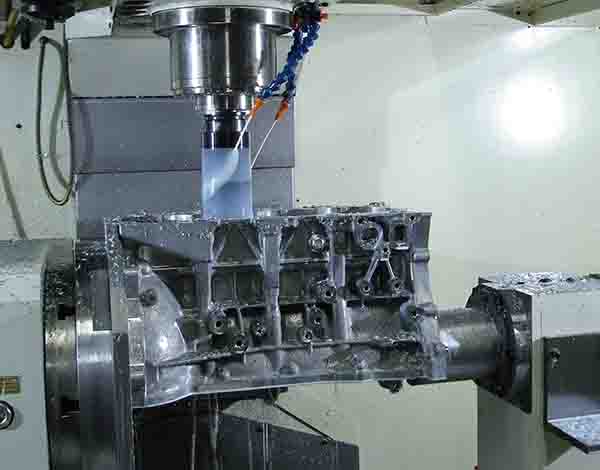 Auto Machine Inc. is like many of our readers’ shops. They do a wide variety of engines, everything from antique motors to stock rebuilds to all-out performance. The shop originally focused on cylinder head work, but quickly expanded into a full machine shop with crankshaft grinding, crank welding, line boring, rod reconditioning, cylinder honing and resurfacing.

Three years ago, John and Jim were wondering if it was time to sell their business and retire. “What would I do if I retired?” John said. “I’d probably end up going back to work for somebody else, so we decided to keep our business going and take the next big step.”

John estimates he has invested half a million dollars in his three CNC machines, along with tooling, fixturing and software. Was it a worthwhile investment? John says it has totally reinvigorated his shop and opened up new opportunities that were not possible before. John says the decision to buy CNC equipment has proved to be a highly profitable move for his business. “The CNC side of our shop may eventually make more money than the traditional side of our shop.”

“The beauty of these machines is that they can run 24/7 when necessary. I can be home eating dinner or sleeping while my CNC machines are working away earning me $100 per hour per machine! When we get to work in the morning, the job is done and we’re ready for the next one. And one man can run all three of our CNC machines.”

One of the reasons why John and Jim decided to buy CNC machines was to “stay ahead of the curve.” Automotive technology keeps changing, and to keep up you have to investment in equipment that can handle today’s engines. You have to stay ahead of the competition and the capabilities they can offer their customers.

John said it is also important to find a niche for your business. A lot of shops have 5-axis CNC machines and do head porting. It’s hard to be profitable when there is a lot of competition. “We’re doing some things that nobody else is doing, so we don’t have any competition to worry about.” 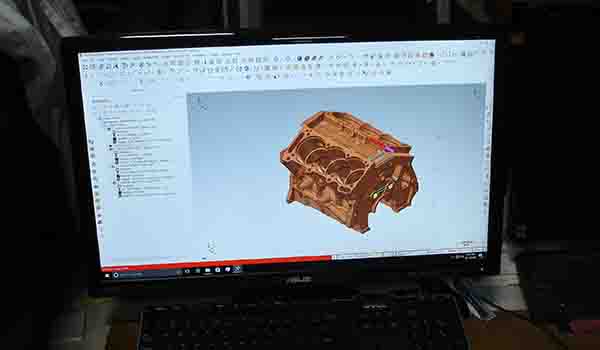 This shows the 3D rendering of the Nissan block developed in Solid Works. The data has been imported into the Master Cam software which will set up the tool path operating commands for the CNC machine.

One of John’s current projects is to produce billet aluminum V6 blocks for Nissan. The engine blocks start out as a solid 400 lb. chunk of aerospace grade billet aluminum. The metal cube is loaded into the Haas VF6SS for rough machining, a process that takes up to 50 hours to complete. The final product is a block that weighs roughly 100 lbs., and is capable of producing up to 3,000 horsepower with twin turbos and alcohol fuel. Some of these engines are also being run in street cars that are making upwards of 2,000 horsepower!

Developing the billet block proved to be a time-consuming task. “It took us about two years to design a block that could reliably handle this kind of power. The stock block is just too weak for the kind of power these guys want to make, even with stronger cylinder liners.”

John said the CNC programming to machine the block has almost two million lines of code for all of the individual operations. “The key to success if you’re going to buy a CNC machine to do this kind of work is to hire a machinist who is also a programmer. You can also hire a programmer part-time to set up your equipment, but it’s better to have somebody in the shop who has the experience and know-how to program and run the machines.”

The software used to design the billet Nissan block was a version of Solid Works, a professional grade 3D design program that costs thousands of dollars depending on the version you buy. Once a part has been designed in Solid Works, it can then be exported to Master Cam software that writes the G-code and M-code that actually runs the CNC machine.

For basic block work, you don’t have to do any design work. You just have to enter the parameters to machine the part. John said his Rottler CNC machine is fairly easy to operate because the software is fill in the blank. It doesn’t require any special programming skills and can be quickly learned. “Rottler provided excellent training when they installed our machine, so we were up and running very quickly with it. We now use our Rottler to do all of our block boring.” 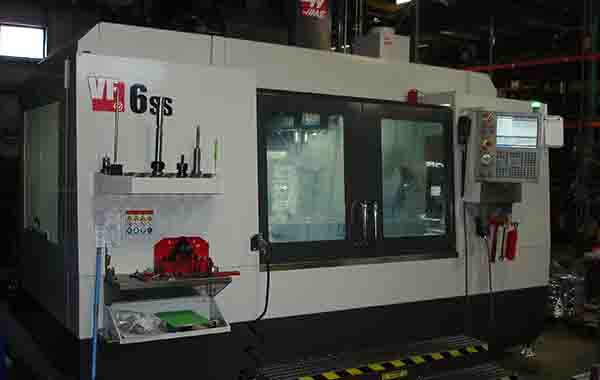 John said he uses his Haas VF6SS for most of his rough machining because it has the fastest spindle speed (10,000 RPM). An important aspect of the CNC process is buying top quality tooling. “The tools are not cheap for this equipment, but they do hold up well. We did 14 billet blocks with one roughing tool.” The fact that most CNC machines use a lot of coolant while machining helps keep tool temperatures down to prolong tool life. Some tooling is also cooled internally rather than spray cooled. He uses a water-based coolant in all three of his machines.

“One thing you have to keep in mind if you’re thinking about buying a CNC machine is not just the cost of the machine itself, but also the tooling, fixturing and software. “We’ve spent over $20,000 on software alone, and we usually update it every year at additional cost. Updates are important because most updates give you more capabilities than you had before.”

John said it’s also important to buy a computer with a high end 3D gamer video card with as much RAM as you can get if you’re going to do any 3D modeling. The faster the computer and the better the capabilities of the video card, the quicker the software will run and render the illustrations. He said he had a local computer guru custom build his computers (he uses two in the CNC department, one to run the 3D Solid Works software, and a second to run the Master Cam software).

If you think you are going to learn 3D CAD/CAM software overnight, you need a reality check. The basics can be learned fairly quickly, but to be really competent at the level it takes to design billet performance engines, it can take a year or more. That’s why John recommends hiring a machinist who also has some CNC programming experience (the more experience the better!). 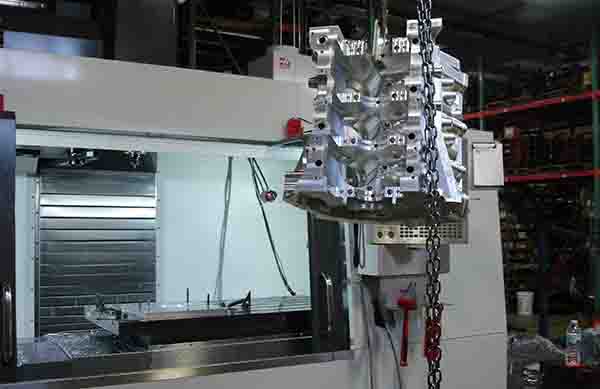 What started out as a 400 lb. chunk of billet aluminum is now a rough finished 100 lb. Nissan V6 block.

John says adding CNC capabilities to his shop allows him to do all kinds of custom projects. His programmer can design custom parts that can then be fabricated in the CNC machine. Once such project John’s brother Jim is working on is a blown and fuel injected flathead V8 for a street rod he owns. “We designed and custom made the manifold for the blower and injectors. It’s a unique one-of-a-kind piece.” His programmer also did a main support girdle to fit an AMC engine block in a drag car he owns. He even sold some of main girdles to other AMC owners on ebay.

Several years ago, we ran an article on CNC machining and how it was helping shops expand their businesses into non-traditional markets. Many of the shops who had purchased some type of CNC machining center were using their equipment to machine oil well pumps, gun components, custom motorcycle parts, even custom gear shift knobs, valve covers and emblems. Many such projects lead to repeat business as well as new business when people see a part that had been custom made and they want a similar piece for themselves.

With 3D modeling software, if you can design it you can machine it. Depending on what it is you are trying to make, you may have to fabricate some custom fixturing to hold the part while it is being machined, and you may have to buy additional tooling if your existing tooling isn’t right for the job. But for many custom parts, the question many customers ask is not now much it will cost, but can you make it? If you can make it, they will usually pay what ever you ask to make it (within reason, of course). The point it, with custom work you don’t have to be as cost competitive as you do with other types of work. 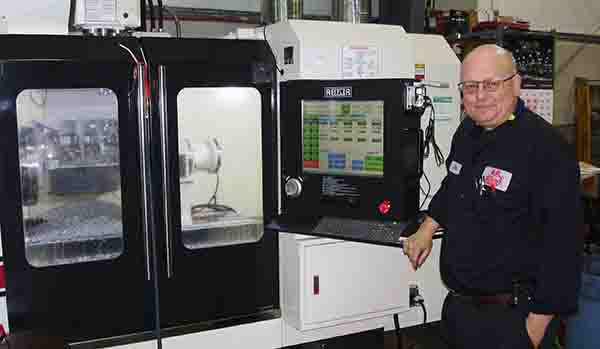 John says his CNC machines have really reinvigorated his shop and opened up new business opportunities.

The street rod market is always heading off in new directions, and one of the current trends is to build something that’s unique and different so the vehicle owner can get more attention. Guys are pulling their small block Chevy and Ford engines out of their street rods and replacing them with odd-ball powertrains such as turbo diesels, industrial engines and even marine inboard engines. Such projects often require custom fabricating manifolds, valve covers, timing covers, oil pans, pulleys and brackets, motor mounts, bellhousing adapters, etc., which is a perfect opportunity for a shop that can do 3D modeling and produce the parts on their CNC machining center.

The antique restoration business is also a good one for 3D modeling and custom CNC fabrication. Some parts are simply unavailable because nobody makes them. But you can with 3D modeling software and a CNC machining center.

Making the Plunge into CNC