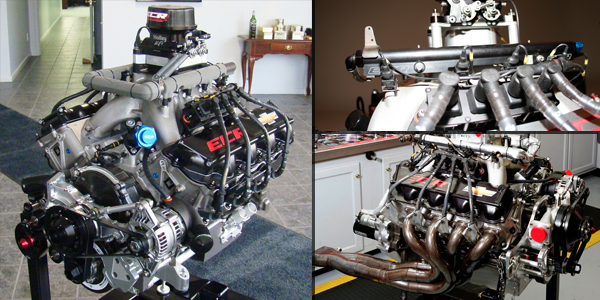 At the Monster Energy NASCAR Cup level, it’s no secret that the competition is fierce. Every little thing matters from the driver to pit stops to one of the most important aspects – the engine.

The Chevrolet engine in Cup is called a R07.2. That’s a 5.8L two-valve per cylinder V8. Its roots are in the small block Chevy era from 50-plus years ago. However, over time it’s been refined, and that is the engine the folks at Earnhardt Childress Racing (ECR) put out on the track each week. 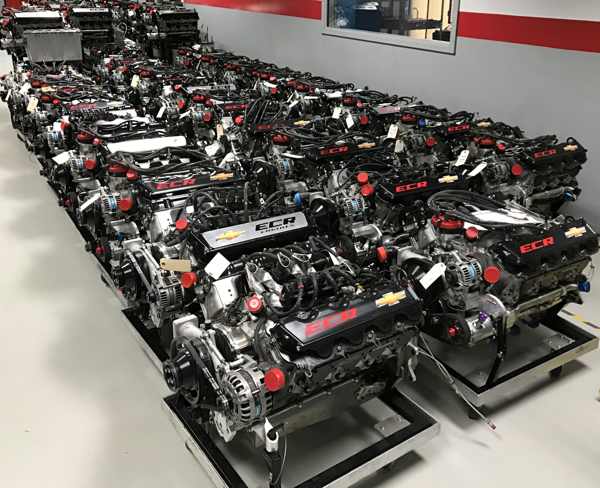 “The basic architecture [of the engine] as far as bore spacing, bore sizes, two valves, push rods, etc. has stayed the same,” says Andrew Randolph, technical director for ECR. “What has changed is the materials, tolerances, surface finishes, masses, and things such as that so these engines, which are naturally aspirated, can turn 10,000 RPM and make over 850 hp when unrestricted.”

NASCAR Cup is a true racing series where there is not any kind of balance for performance or any kind of penalties that the sanctioning body puts on engines that over perform. So from an engine development standpoint it’s really great.

“Whoever can make the best engine is going to have the advantage,” Randolph says. At this level, each manufacturer has to provide a NASCAR-approved block, cylinder head and intake manifold casting. The team, engine shop or engine builder can then modify that casting however they prefer to maximize performance. The only limits being total displacement, bore size and some minimum masses and dimensions on various components.

“The box that you have to operate in and what you can do is actually quite large,” he says. “If you look at engines from different teams you’ll see they are very different and their performance characteristics are very different. It’s a pretty awesome environment for engine development. It’s a huge playground that is fun when you’re doing well, but when you’re not doing well it’s more like work.” 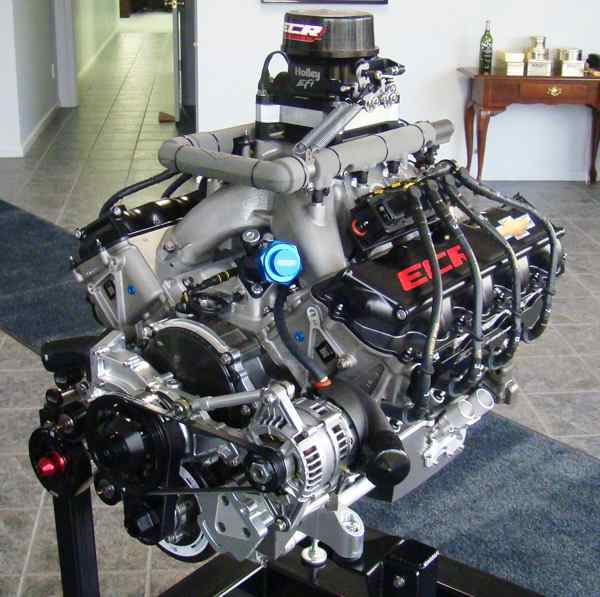 Everything at this level of racing and engine building is purpose designed. “The advantage we have in the racing world over the production world is we know exactly how the engine is going to be used – we know how long is has to run for, the temperature it’s going to run under, the distance it’s going to run, and the engine speed range,” Randolph says. “We can customize the engine for each racetrack for each week based on the particular engine speed characteristics and throttle characteristics of the track and even the driver who is going to be driving it, to make sure that the power curve is optimized to produce minimum lap time at that specific event.”

These engines only have to last for one race, so the objective is to have an engine that has good durability for race distance plus one mile. After the race, the engine is going to come back and is totally disassembled. Many of the parts will never be used again, but some of them will be such as the crankshaft, cylinder head and engine block. Each part is serialized and has a prescribed lifetime to it. 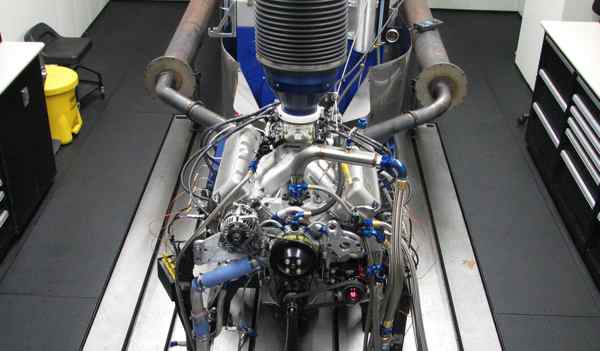 “Wherever there is a performance advantage to make a part where it’s going to shorten the lifetime of it but still get you through the race and produce better performance, the incentive is there to do that,” he says.

ECR does everything it can to make the engine run and get as much power out of it as possible. From the castings, the first thing ECR does is lighten everywhere it can. 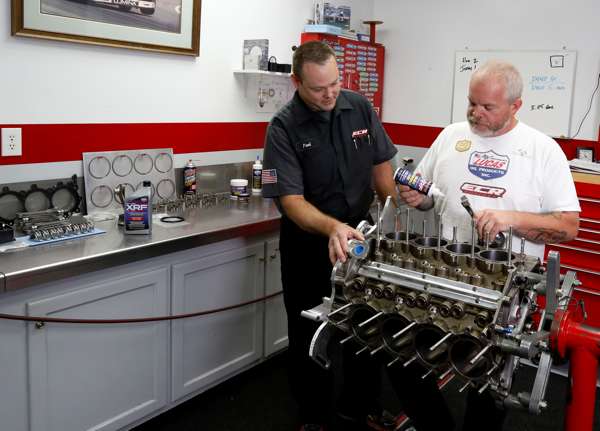 “We want to make things as light as they can possibly be, but still be stiff where stiffness is required and still have enough structural integrity to last through the event without any failures,” he says. “For example, an intake manifold casting that comes in the door will weigh 35-40 lbs., and a finished intake manifold that goes on one of these engines will be in the 12-15 lb. range. So that gives you an idea of how much aluminum is sitting on the floor when we are done.”

These performance enhancements that ECR creates is all part of the team’s engine development philosophy, which is not to develop the engine as an 8-cylinder engine, but rather as eight one-cylinder engines. 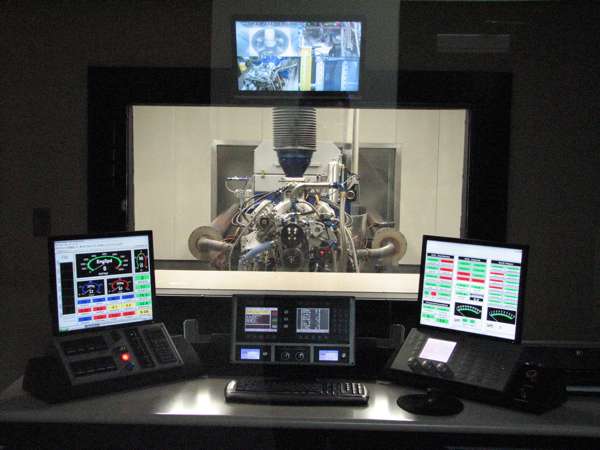 “We instrument each cylinder with cylinder pressure so we can determine the power contributions of each of the eight cylinders individually,” he says. “Then we will design the cam timing, the exhaust systems, the intake geometry and even sometimes the compression ratio, although we have a maximum compression ratio of 12:1. We design each cylinder individually such that when you add the eight cylinders together you get a power curve that’s optimized for the specific track you’re going to.”

It’s a unique way to develop engines – essentially eight one-cylinder engines that happen to share the same crankshaft – but ECR has been able to make engines light and optimized for specific tracks quite successfully.

In order to reach this height of performance, ECR relies on a number of companies for quality engine parts. Head gaskets at the Cup level are under some of the most stress of any part, and ECR uses Cometic Gaskets. For pistons ECR uses MAHLE. They use both Del West and Xceldyne for valves. Connecting rods are either CP-Carrillo or Pankl. For crankshafts ECR uses Sonny Bryant.

“Valve springs are a very challenging part of these engines,” Randolph says. “A coil valve spring at 9,000 RPM has to get compressed all the way down until the coils are essentially bound to one another and then sprung back open again, but it has to do that 75 times a second and it has to do it for 4 hours. So you can imagine the stress that’s on that part. It’s a very expensive and very challenging part to do. With the kind of engine speeds that we run, we get our valve springs from PSI out of Michigan.” 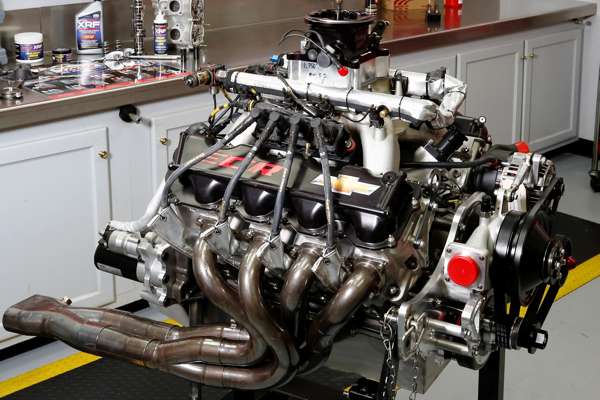 Piston rings are another major part with the RPMs that ECR turns and the bore sizes that it has, which require a lot of development. ECR uses Total Seal piston rings in its engines.

Also important is the oil at this level. ECR partners with Lucas Oil on those performance developments.

All that development comes down to horsepower on race day. If ECR doesn’t find one or two horsepower a month, it won’t be long before its teams are falling behind.

The next time you’re watching the Monster Energy NASCAR Cup Series on TV, think about what goes into those engines for an afternoon of racing entertainment.

NASCAR and Rev Racing have announced the next generation of drivers participating in the NASCAR Drive for Diversity Driver Development Program. Following a national and international search, eight talented drivers were selected for the newest class after participating in the Advance Auto Parts Drive for Diversity Combine. Related Articles – Holley Announces 2023 Event Dates