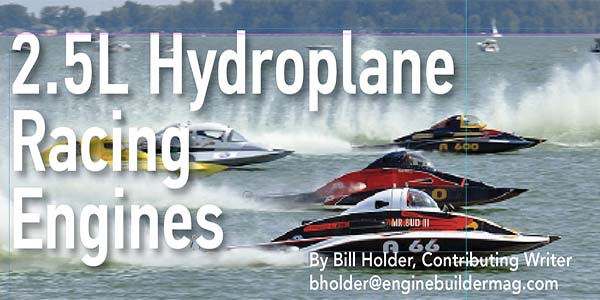 Modern marine engines are as varied as their road- and track-going counterparts. Whether they’re powering working habor tugs, ocean-crossing container ships, leisure and fishing boats or hardcore racing boats, marine engine builders are dedicated to improving their performance and reliability through innovation.

2.5L engines have been used in both midget racing and hydroplane applications for decades. Interestingly, the Offenhouser engine, which was so popular in midget cars, was not used in the hydroplanes as there was no class where it could have been used. 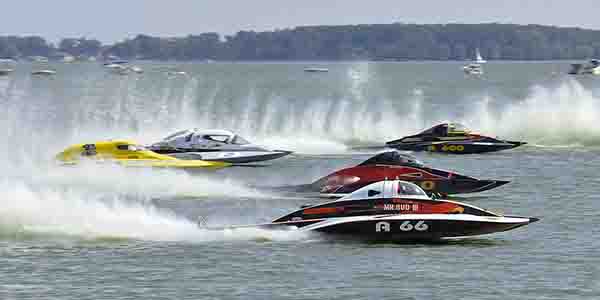 The SESCO was used sparingly in the hydros, but in a speed run in 1973, a SESCO engine powered a 2.5-liter modified Hydroplane to a new World Speed Record.

There are actually two subsets within the 2.5-Liter class. The modified class covers a number of different engines. Then, there is the S Stock Class which can use only two Pinto automotive engines, namely the 2000cc and 2300cc versions. We are talking completely stock here with only a two-barrel carb.  Obviously, these two classes do not compete against each other!

Just about every upgrade was allowed on the A Class powerplants. Such modifications included multi-carburetors, fuel injection, head porting, and just about anything else you can think of. There was a significant addition to the modified engine list in the 1990s when the 166cid midget engines were allowed to compete. The power superiority though, caused the American Power Boat Association (APBA) governing body to require an extra 100 pounds to be added to the boat weight to keep everything equal.

Here are the early engines that defined the 2.5-Liter Class. 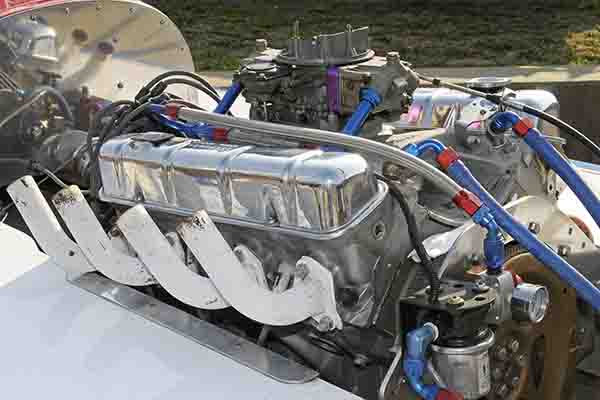 These early 1960s inline engines were a mainstay for the midgets and were modified to the hilt for increased performance on the water. When many engine builders were done with their upgrade modifications, there wasn’t much resemblance with the factory version.

A Falcon race engine was probably capable of doubling the engine’s horsepower. A typical example included three Ford F100 carburetors, an Offenhouser intake, Boss 302 rods, Jahns pistons, and a solid lifter cam.  The 144cid Falcon engine was a strong runner and produce in the 110 hp area when tuned.

As time went on, the Falcon was seen less and less. They began to lose the horsepower and longevity battle to the Chrysler, Buick, and Chevy ll engines.

Even the Corvair air-cooled engine was tried during this period, but it had many issues, cooling being the main problem. A Maryland engine builder, Bill Burn, tried a unique set-up which included vents in the bottom of the boat for exhaust and air flow to set up a ‘shower system to sprinkle water on the engine to keep it cool. The Corvair powerplant never caught on but it was a good engine when it was set up correctly.

This engine was quickly adopted by the 2.5-liter A Class cadre’ and regular modifications included the likes of twin carbs (often Webers) replacing fuel injection. This Bowtie engine was the rival of the Ford Falcon. With its straight-four configuration and 153 cubic inches, it was a serious competitor.

Later, there were efforts to increase the power of the Chevy ll engines. Cylinder heads from small block V8 Chevys and 351 Cleveland Fords were tried! 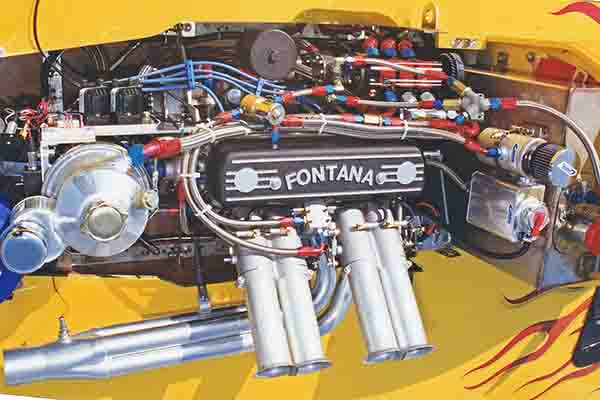 This engine had one of the most exotic modifications for hydroplanes by being destroked down to 2.5 liters. There were a number of different methods of getting to the same final displacement number, including a 50 percent de-stroke and reducing the bore size by sleeving all the cylinders. In addition, there was a plan to reduce the stroke to reduce the cubes. The engine ran as a hydro engine with fuel injection or a four-barrel carb.

This 2000cc engine was the lone power plant used in the Stock Class. No alterations from stock are allowed in that class. The engine was also often mated to an Esslinger head. Also, during this time, the Chevy Vega four-cylinder engine was introduced, but it was nowhere near the Pinto and died a quick death for aquatic endeavors. In the 1980s, the 2300 version began to be permitted in the Stock Class.

During the 1970s, the race was on to find more horsepower and it seemed that the stakes got higher each year. Then, the Chevy-based SESCO engine made the hydroplane scene. It was a small block Chevy which was turned into a four-cylinder. A few of these engines did well.

As it did with the midgets, the Duke also played well in the water, But it wasn’t too successful initially. Its lightweight castings, poor flowing heads and cast cranks didn’t perform much like a race engine. But when Pontiac stepped in and started making Super-Duty parts with stronger blocks, high-port aluminum heads and forged cranks the small teams were able to put together very competitive race engines.

Also during the 1970s, there was an invasion of a number of foreign brands. Renault V6, Alfa-Romeo and BMW introduced hydroplane engines. They were all built by racers and showed some unique pieces including a slide valve fuel injection system. 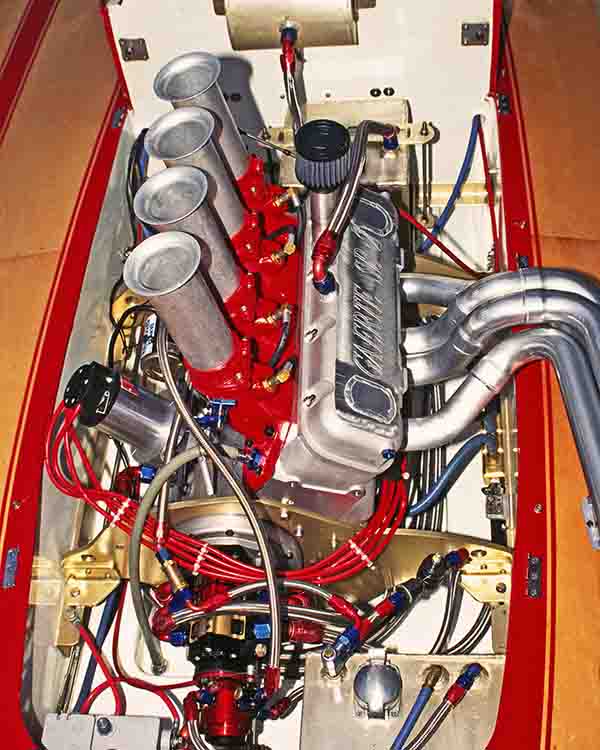 But by far the most prominent foreign engine was the Datsun 240Z inline six. This overhead cam high rpm engine was a perfect powerplant for the 2.5L application. It was economical to build and became an instant winner. With Weber carbs or Kinsler mechanical fuel injection, it could easily hit 8,500 rpm and its outstanding oiling system negated the need for a dry sump system. There was a time that nearly 90 percent of the A Class hydros were using this powerplant.

In the 1980s, BMW boosted its development efforts and the records began to fall. This engine was a heavy factory inline 6 with a wildly modified overhead cam head that could provide 10,000 rpm.

Regardless of how good these earlier engines might have been, there is always someone trying to produce something better. Here are some of the current 2.5L hydroplane engines.

This is an all-aluminum based engine on a small block Chevy and a Chevy ll. The block uses a Chevy ll crankshaft, custom cam core and Chevy timing gears and lifters. It was built to accept Ford, Chevy or Mopar heads and was a consistent winner.

The Super-Duty block was discontinued by Pontiac, but KRP brought the rights to the castings, so they live on. The KRP block and Ford head were then combined and have proved to be an effective performance combination.

The 2.5L hydro racing scene has also seen a number of other combination engines in which two different manufacturers’ block and heads are used. Some of these so-called Combo engines have been successful. Some examples include Rodeck block/Gaerte block, Rodeck/ Brayton head, and Pontiac block/Edelbrock head engines. 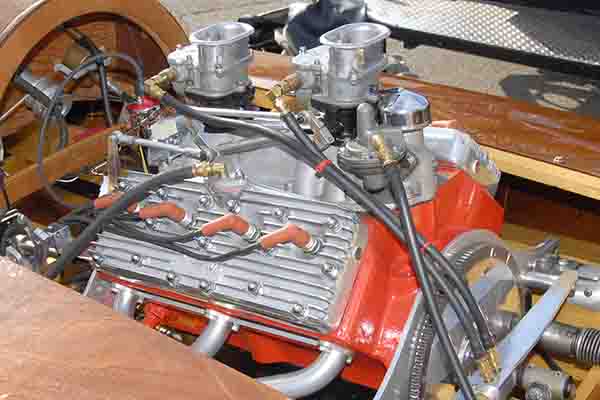 In the 1990s, the A Mod Class increased to 166 cubic inches. Engines could be used with no modifications. Following this change, a rule in the mid-2000s allowed four-valve engines. These then evolved into stock block and head engines, up to 146cid with fuel injection and unlimited modification. Gasoline and alcohol were both allowed with boat weights adjusted for each fuel.

Esslinger took the Ford 2300 design, updated it and built a purebred racing engine. Though based on the company’s midget engine the ports were raised for better flow and the combustion chamber shape was tweaked. It has an overhead cam and a strong bottom. Lighter weight was one of the criteria used in the design.

This engine came on the scene when the rule was passed for four-valve engines with Roush Racing doing the work. The development started with the use of E85 before moving to methanol. These engines were top runners due to their light weight and high rpms. They are fully electronic and have dry sump oiling. The deficiency with the engine is that it has a 20 cid deficit than the competition and lacked speed in the corners.

As you can tell there were plenty of creative efforts at making the fastest 2.5L hydroplane engine out on the water. No matter which engine you might choose to build or race with, new or old, there are now even more ways to increase the performance and power of these marine engines.

A Review of the History and Technology in 2.5L Hydroplane Racing Engines