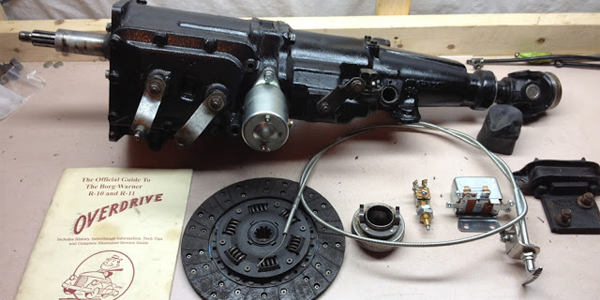 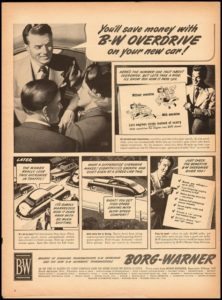 The early overdrive transmission is actually a two-speed planetary transmission attached to the rear portion of a standard three-speed transmission. The planetary unit is the heart of the overdrive and its engagement is controlled by one of three ways – by the pinion gear, the internal gear or by the sun gear. All three methods have been used over the years.

With the introduction of electrically controlled overdrives in 1939, the driver could easily shift down to a conventional higher gear by simply depressing the gas pedal to the floor, which engaged the “kick down switch” and the higher gear. This proved to be quite handy when pulling out to pass another car on the highway. Once the car was safely passed, the driver could just lift his foot and the transmission would shift back into overdrive. 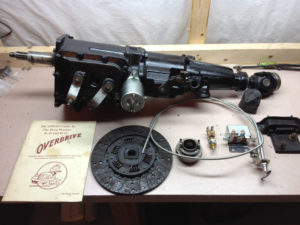 It didn’t take long for the overdrive to catch on as a popular option. Especially during World War II with gas rationing in effect, anything that increased mileage was welcome. Even after the war the overdrive option continued to be popular. Traveling salesmen in particular were fans, especially if they were working strictly on commission and had to buy their own fuel.

R-10 was the standard overdrive model and the most common. R-11 was for heavy-duty applications, including the bigger, heavier cars like Packard and Lincoln, and higher horsepower applications in later years. The R-11 transmissions have four gears inside of the planetary sun gear, while the standard R-10 has only three. Don’t worry – the R-10 is still plenty strong for most applications. 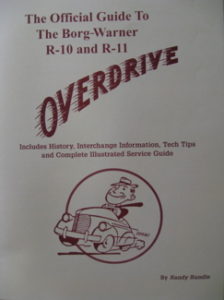 Regardless of the transmission model, the governor, relay, kickdown switch, solenoid, and wiring are all the same. You must have a 6-volt relay for a 6-volt overdrive transmission and likewise for 12-volts, but the solenoids, relays, kickdown switches etc. will all interchange between all of the different makes and models.

In my research on the overdrive transmissions I was introduced to Al Weaver who was then in his upper 70s. Al was an engineer by trade and was part of the team that designed the original R-10 and R-11 overdrives.

Al later traveled for the Borg-Warner Co., conducting classes for the technicians on how the overdrive transmissions worked and how to troubleshoot them. After learning of Al’s background I knew I had found my overdrive mentor. He eventually went to work for Studebaker in the mid to late 1950s setting up its overdrive program, which might explain why Studebaker sold so many more overdrive options than the rest of the car manufacturers.

I spent a total of nine years learning overdrives from Al before he passed on. He had a lot of the information in his head, things he knew from memory, and never wrote down. He shared a lot of his technical wisdom on overdrives that never made it into any shop manual.

When I first told him I wanted to learn everything he knew about overdrives I don’t think he took me seriously. “You know those transmissions haven’t been around for 40 years, right?” and “Are you SURE you want to learn overdrives?” he would ask me over and over.

As I look back now, my time with Al was well spent. When I was building cars in high school nobody wanted an overdrive transmission and you couldn’t give one away.

Now some 40 years later, the travel speed on the highways is much faster than it was in the 1970s. As a result, the three-speed overdrive transmissions that nobody wanted way back when are now more popular than ever. 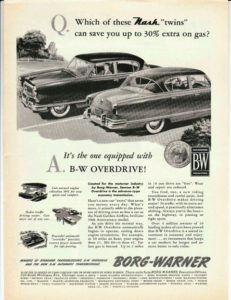 Besides the Great Race teams, I sell a lot of overdrive parts to the average antique car owner who wants to be able to drive his antique vehicle to a car show and be able to keep up with modern traffic and not have the engine turning 3,700 rpms at 60 mph.

With the three-speed overdrive transmission there is plenty of power for driving around town, and on the highway the engine rpms will drop about 33 percent compared to a non-overdrive car.

The first thing I did after I got my education from Al was to write a book on how the overdrive works, how to operate it and how to troubleshoot it. I also included all of the things I learned from Al. The next logical step was to offer a rebuild service for solenoids, among the most common wear items.

It took less than a half dozen years to use up the supply of NOS (new old stock) parts to rebuild the overdrive solenoids. The relays were also a common problem. So in 2012 I began to have the solenoids reproduced along with the relays.

Lubrication Caution: Do not use anything higher than GL-1 in the overdrive transmissions. Modern gear oils are up to GL-5 or higher now, but the modern detergents in the gear oil will attack the bronze parts inside of the transmission.

There is an opportunity to help your customers with their overdrive transmission, and once they find out you have the knowledge and replacement parts they will quickly spread the word. I get one or two calls a day from potential customers looking for a solenoid. The demand for overdrive parts today is greater than ever.

That is where the book comes in as it explains exactly how to shift an overdrive step-by-step. It also includes troubleshooting, interchange information, and exploded views of assembly procedures. The book makes sure everybody starts out with the same knowledge.

What Parts are Available for Overdrives?

In addition to my Overdrive book, which covers operation, repairs, troubleshooting and interchange information, a variety of parts are still available to service these versatile transmissions. Keep an eye out for kickdown switches, manual control cables, transmission seals, solenoids, relays, and gear oil.