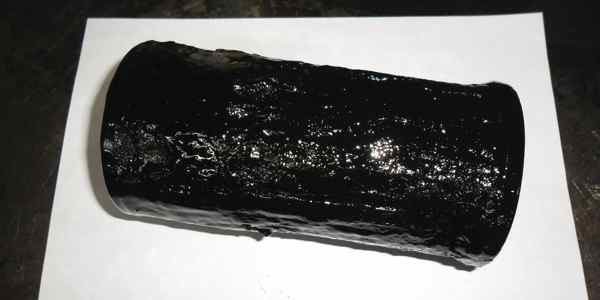 Not only does oil lubricate as a means of controlling friction but also has to control contamination, temperature, corrosion, shock, wear, and pressure. Oil analysis is the only true way to put a set of “eyes” on the engine’s condition and the condition of the oil as to when it should be changed.

For most consumers, a preventive maintenance program for their automobile consists of nothing more than an oil change. While a regular oil change would be considered very important, the major point of changing the oil is to know “when” to change the oil.

The interval of the oil change is often dictated by two factors: someone’s preference (word on the street) or the vehicle’s maintenance guide. Today’s gasoline internal combustion engine is highly advanced and so is the engine’s oil. It’s amazing how the traditional 3,000 mile oil change no longer exists, but for some reason is still highly practiced.

While the owner’s manual of your automobile may give recommendations of an oil change, that also will depend on a lot of factors as to which interval is right for you. 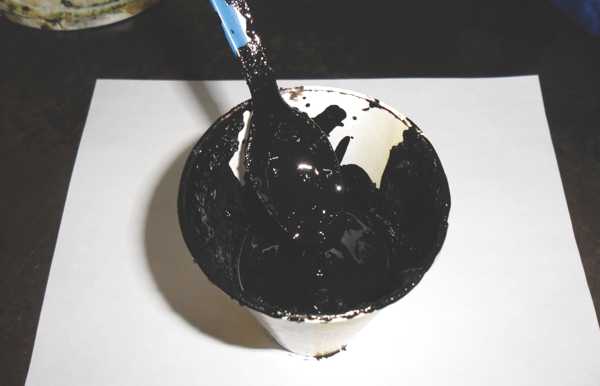 This is the oil and filter taken from a truck that had not reached the drain interval. The oil is so thick that the spoon stands up in the sample cup. The customer followed the drain interval but did not pay attention to the idle time of the engine. What you see is the depletion of the additive package to a point where the oil has started to shear. This is the separation of the oil because it can trap no more and is starting to literally come apart and burn off.

The same can be said for the diesel engine also. The reason I want to touch on this subject is because in working with diesel engines every day, I still find myself talking about an engine oil change on a regular basis. There are many different factors that affect the frequency of an oil change such as climate, driving style, viscosity grade, and engine condition. The best advice on performing an adequate oil change would be to have a frequent oil analysis performed.

We all know that oil lubricates the engine, but oil also has many other functions that are often overlooked. Not only does oil lubricate as a means of controlling friction but also has to control contamination, temperature, corrosion, shock, wear, and pressure. Oil analysis is the only true way to put a set of “eyes” on the engine’s condition and the condition of the oil as to when it should be changed.

Today’s oil analysis programs use state-of-the-art equipment and techniques to provide the consumer with valuable information that will help them properly maintain their engine. A proper oil analysis can be somewhat intimidating to read and comprehend, so I hope this will help in understanding an oil analysis report. 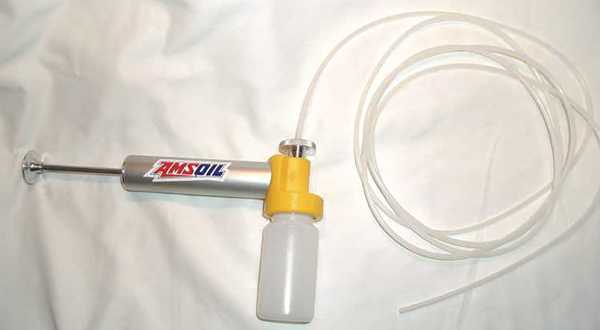 This is an example of a suction tool used for oil sampling that can be purchased from most oil manufacturers.

First of all, there are 10 important factors that determine the condition of oil and its service life.

The most important factor of lubricating oil, viscosity is a measurement of resistance to flow at a specific temperature in relation to time. In oil analysis, the used oil’s viscosity is compared to that of a new oil’s viscosity to determine whether excessive thinning or thickening has occurred.

The effects of high or low viscosity oil result in engine overheating, poor lubrication, restricted oil flow, metal-to-metal contact, and harmful deposits. If the viscosity is wrong, make sure the proper oil grade is being used and determine if there are any leaks in the head gaskets or injectors.

Fuel dilution comes from unburned fuel during the combustion process which creates oil thinning. This causes the oil to lose its film strength, which leads to abnormal wear. Fuel dilution leads to accelerated engine wear and shortens oil life.

Oxidation occurs when engine oil and other components combine with oxygen to form harmful by-products. Heat, pressure, and catalyst materials accelerate the oxidation of the oil. Most oils contain additives that inhibit the oxidation process. The by-products of oxidation are lacquer, corrosion, and thickening to a point the oil cannot lubricate. Oxidation usually occurs from overheating, extended oil drains, blow-by, and the use of the wrong oil.

Nitration is formed when blow-by gases from normal or abnormal combustion gets past the compression rings and forms with the oil. Nitration is more common in alternative fuel engines such as natural gas or propane and is highly acidic, forms deposits, and oxidation. If concentration of Nitration is high, check the integrity of the engine and the operating temperature.

The Total Base Number of a new oil represents a scale of the amount of additives in the oil that are capable of neutralizing the acid by-products of combustion. For example, a new oil starts with a TBN of 12. While the oil lubricates the engine to the point of its service life, the TBN decreases as the additives neutralize the acids. TBN is an indicator of when the oil needs to be changed as most diesel manufacturers recommend that oil should be drained when the TBN reaches one-half or one-third of its original value.

Next thing to cover in an oil analysis is the elemental analysis. The elemental analysis is used to determine wear metal elements, additive elements, and contamination elements. Wear metals indicate problem areas while the additives determine what kind of oil such as engine, hydraulic, or transmission. The contamination elements determine the oil serviceability and pinpoint problem areas. Below is a list of elements and their functions.

Chromium – Shafts, rings, and chromate from the cooling system

Sodium, Calcium, and Magnesium – Alkaline additives used to neutralize acids formed from by – products of combustion. Also have detergent qualities and corrosion inhibitors.

Contamination Elements and Their Causes

The longevity of your engine is dependent on regular oil analysis especially when maintaining a fleet of equipment. Oil analysis can provide valuable information as to what engine problems may be lurking and help in maintaining proper service intervals. Any “abnormal” factors or elements will generally be red flagged on the oil analysis report which will need to be addressed. Oil analysis kits can be ordered from several different companies who provide the service from several locations based in the United States. Make sure the engine is at operating temperature and follow directions provided in the oil analysis bottles. While oil samples can be taken from the oil pan drain plug, it is recommended to use what is known as a sampling gun. The sampling bottle is placed in the sampling gun and oil is drawn through a small plastic tube placed in the dipstick tube. This requires minimum effort to draw oil samples and less mess. Make sure to measure the plastic tube of the sampling gun with the length of the dipstick to achieve proper depth in the oil pan to draw the sample. 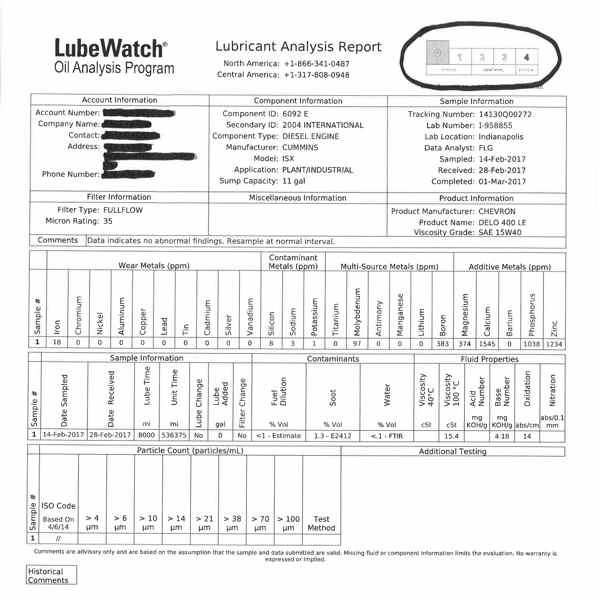 Here are two oil analysis samples taken from a trucking company from two different trucks. One has a report of normal and the oil used is functioning as required. The other is using the same oil as the first truck but has started to ingest coolant from either a head gasket or EGR cooler. Look at the difference in the cooper, sodium, and potassium levels.

For today’s diesel engines, an oil change along with the appropriate filter at the proper interval is more important than times past. The lubricating system has not changed but the demands of the oil have. Today’s diesel engines have to run more efficiently with a lower impact on the environment with emission control devices such as EGR, DPF, and CCV (Closed Crankcase Ventilation). With these emission control devices plus increased operating temperatures, tighter engine tolerances, and extended drain intervals requires a cleaner oil. This is why oil analysis has become more practiced as a way of “babysitting” the engine. You have to know if the oil and filter you are using along with your drain interval is going to keep your engine alive.

Remember, not all oil is the same and you get what you pay for. Most oil companies have a variety of oils that are rated as good, better and best formulations to choose from. This in turn will reflect price, but the important thing to remember is that it also reflects the additive package. You can settle for cheaper oil but it may not perform to the extended drain interval that the manufacturer recommends. This is where oil analysis, especially around the 10,000 mile range for Class 8 trucks, will give you an idea of what is happening. The soot and acid levels in the analysis will tell you if you are going to make it to the interval, which is now around 40,000 miles. Also the potassium and sodium levels can indicate coolant in the oil from head gasket seepage or leaking EGR cooler which can spell disaster if not detected in time.

If you are using a labeled oil from a major oil company then the additive package should be appropriate for what the use is labeled for. Additive packages can often be manipulated from private labeled oils like ones purchased from big box stores with their name on it. These packages consist of key ingredients that make up the load bearing and extreme pressure properties that are so important. An example of these would be magnesium, phosphorus, sodium, zinc, and moly which can be very expensive. A cheaper oil will have the least amount of these ingredients and have more sodium because it is cheaper and helps in raising the viscosity. But the downside would be that it causes the acid levels to do up which shortens the drain interval and will create more soot.

Oil filters also have pricing strategies that reflect a good, better, best scenario. The price often reflects the kind of filtration media that is used in the filter. For years filters were composed of what is known as cellulose. Cellulose media works fine with a micron (minute measurement of dirt) rating around 35 meaning that the media will capture particles 35 micron or bigger, smaller dirt particles would be able to pass through. A better filter uses a synthetic blend media which consist of man made fibers along with the cellulose media which can offer a micron rating of about 25. The best filter media is full synthetic which consist of micro-fiberglass fibers with micron ratings in the single digits meaning trapping more dirt. The full synthetic filter will provide maximum filtration and the capability to go the extended drain interval.

Something to think about would be why so much change for engine oil. Why have there been so many changes in formulations in the past decade? Oil companies have to blend oil for the manufacturers of engines so they can meet the demands of emissions compliance. So the changes in formulation that you see come from the manufacturer being forced to produce an emissions compliant engine and oil plays a major role in the performance of the compliance. That is why it is best to use the oil and filter recommended by the manufacturer along with the appropriate drain interval.

10 Things Your Diesel Customer's Oil is Trying to Tell You