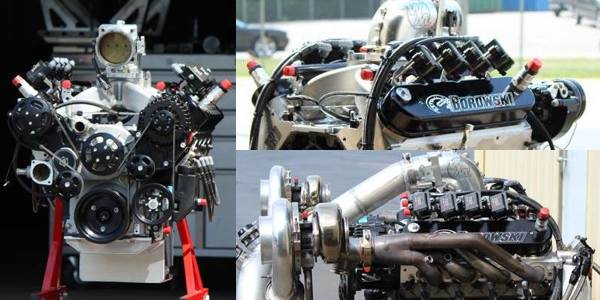 If somebody calls Borowski Race Engines, they will hear the voice of Ken McCaul on the other end. He’s the go-to guy at the nearly 50-year-old, Rockdale, IL shop, which builds custom race, street and marine engines. Recently, a customer called looking for a twin-turbo LS engine. Coincidentally, Ken had just finished up building a 427 twin-turbo engine for another customer who ended up getting a deal on a Pro Mod and wanting twice the power, making the 427 an orphan engine. 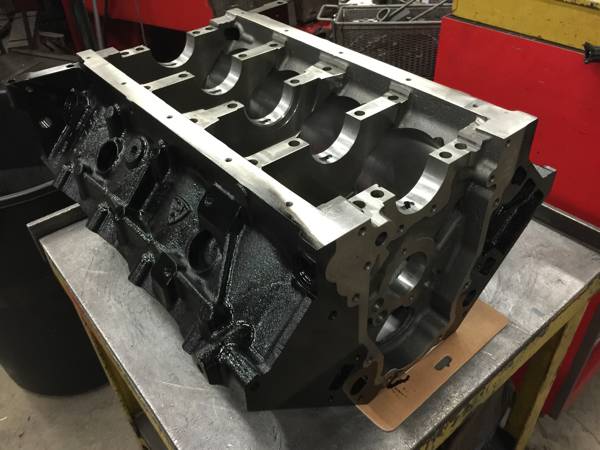 Ken got the call from the customer wanting a twin-turbo LS, and the 427 had a home again. The engine is a hydraulic cam 427 with All Pro heads and Cometic MLX gaskets. It makes 1,530 hp on C16 fuel. 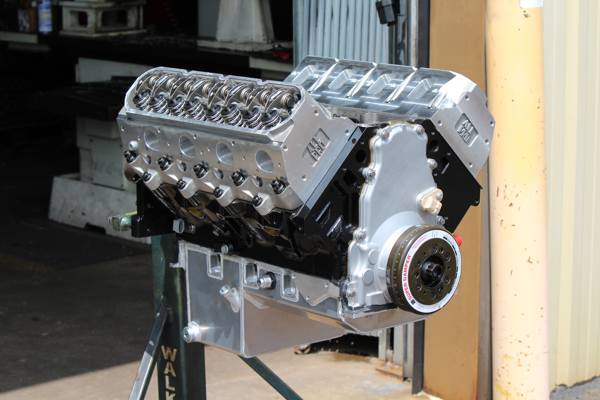 “This engine will make more than 1,000 hp all day long on pump gas,” says McCaul. “The customer wants to use it in his daily driver. I don’t know how that works putting turbos in for headlights, but maybe you only drive it during the daytime.”

McCaul was adamant about the fact that the shop does all its own machine work, and has a Newen CNC valve seat and guide machine, 4-axis Rottler for block work and much more. 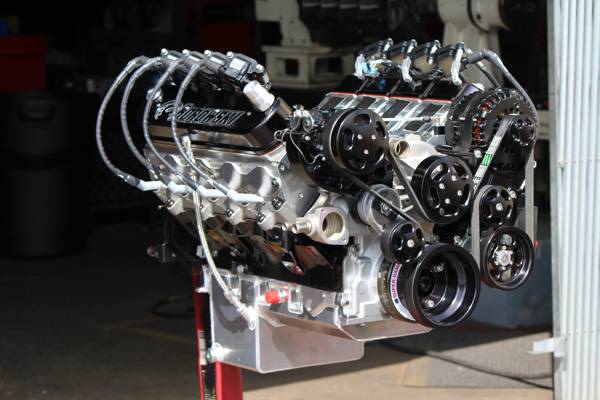 Borowski Race Engines used the Dart LS Next block, which is the only aftermarket block the shop uses for these builds.

“We were the ones selected to test all of the versions of the Dart block for Dart – their first one, the aluminum ones, the MID sleeved ones, the skirted SHP blocks, their cylinder heads and their counter-weighted billet crank,” McCaul says. “There was a lot of stuff that we learned over 200-plus dyno pulls that now go into each of our engines.” 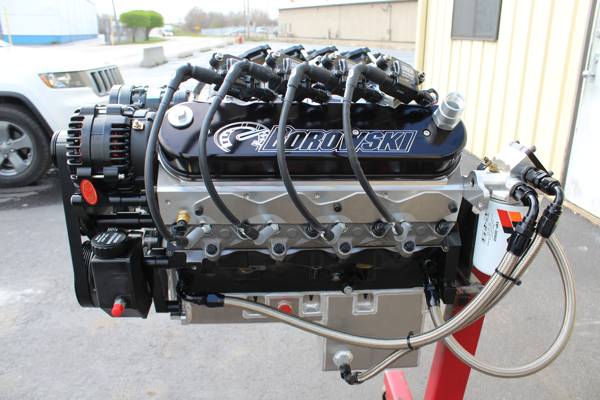 The 427 twin-turbo also got All Pro heads, GM rockers with a bronze trending kit, a custom Dragon Slayer crank, and custom pistons designed by Borowski along with Diamond Pistons.

“These pistons have lateral bracing to support the wrist pin boss and double pin oilers on both sides,” he says. “The rings seal off real tight. At 6500 rpm and 20 lbs. of boost was pushing out between 4-5 cfm through the breather. For an engine with a 105mm throttle body at 6500 rpm and two 83mm turbos, that’s sealed up real tight.” 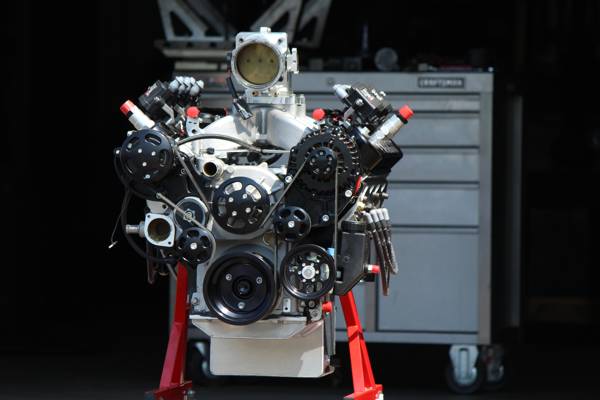 Borowski used Callies rods that are common in short blocks for the engine build and used Cometic’s MLX 5-layer gaskets.

“Those are a big part of this engine,” he says. “The other big item on this engine are the twin Bullseye turbochargers called NLX. These are all we are using nowadays. The front of the inlet on the turbos is threaded on the sides. That inlet is the only one of it’s kind and can be screwed in and screwed out to adjust the size of the map groove, which is located at the base of the blades and will let the turbo inhale and exhale through that groove. 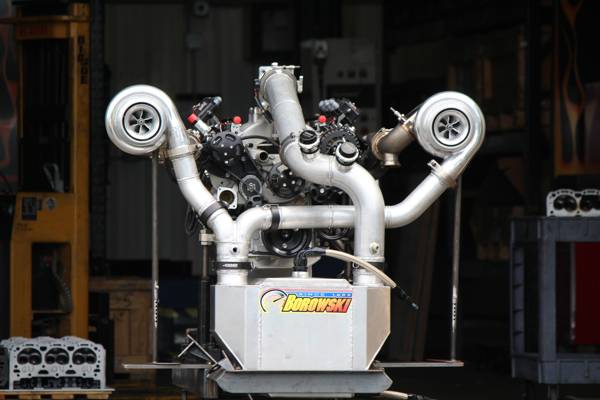 “If you picture that turbo spinning and you take your foot off the gas, the throttle body closes. Now there’s the turbo spinning, but it is pushing against a wall, which is why turbos chirp because it is trying to push the air in the wrong direction. This special aspect of the Bullseye NXT turbos let it exhale through that groove and is easier on the turbo. 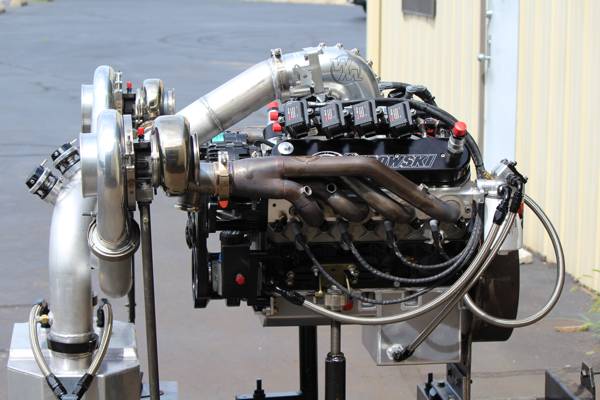 The bigger thing is if you’re racing in a class where you have to have a 76mm turbo and you have a groove at the inlet that can pull air through the outside of the housing into the turbo, it’s effectively a much bigger turbo.”

According to McCaul, the 427 twin-turbo engine is barely breathing on the back of these turbos to make 18 lbs. of boost. These turbos are a big part of the story on how Borowski Race Engines makes so much power. 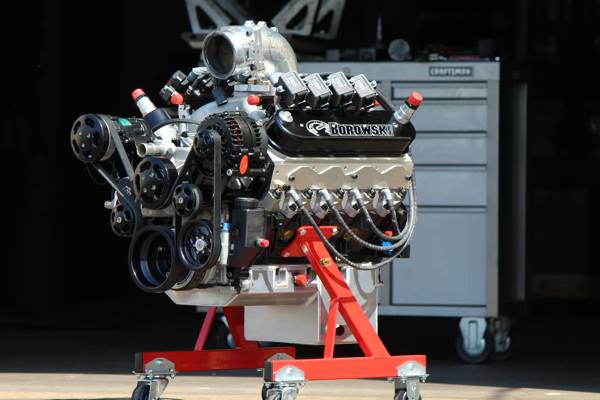 Advertisement
In this article:Cometic Gasket, Engine of the Week, Ken McCaul, racing engine