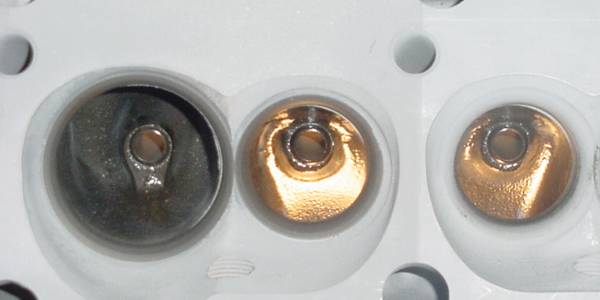 Coatings have been developed to improve performance, durability and reliability. Though once the exclusive trade secret of race engine parts suppliers and engine builders, today parts coatings are available for many different applications – and can even be applied in your own shop.

Instead, dissimilar rotating and moving metal parts are expected to simply coexist peacefully next to each other and perform unbelievably complex tasks at incredible speeds. Mostly, they do – but when they don’t things tend to go badly quickly.

In order to help those parts play and work well together, coatings have been developed to improve performance, durability and reliability. Though once the exclusive trade secret of race engine parts suppliers and engine builders, today parts coatings are available for many different applications – and can even be applied in your own shop.

Coatings can be used to improve the thermal properties, the ability to withstand friction and wear as well as the ability to shed or retain lubrication. Experts say different coatings and application techniques are required for different engine parts. No single coating works best for each application because each application’s needs are so different. Generally, the most frequent candidates for coatings are pistons and engine bearings, though valve springs and piston rings, as well as camshafts, pushrods and cylinder heads can benefit from one or another coating processes.

The more highly loaded the engine, the more heat it produces and the more heat the pistons, cylinders and heads have to withstand. Combustion temperatures inside an engine can reach 1,450 degrees or higher depending on the air/fuel mixture and type of fuel. In boosted engines, the flame temperature is the same, but there’s more total heat produced in the combustion chamber because more air and fuel are being burned in the engine.

The biggest question isn’t how to eliminate heat but how to manage it. Thermal barriers form an insulating layer that reduces heat transfer and reflects heat back towards its source. Thermal dispersants, by comparison, absorb heat and increase heat transfer away from its source.

Aluminum conducts heat readily and pulls heat away from the combustion chamber, good for reducing the risk of pre-ignition and detonation, but it also reducing the engine’s thermal efficiency by allowing heat that would otherwise generate pressure to dissipate into the head and cooling system. Thermal barriers applied to the inside of the combustion chamber and the faces of the valves can slow the loss of heat and increase combustion pressures for more power. It can also help the engine run cooler, so more congested engine compartments can actually be more efficient. 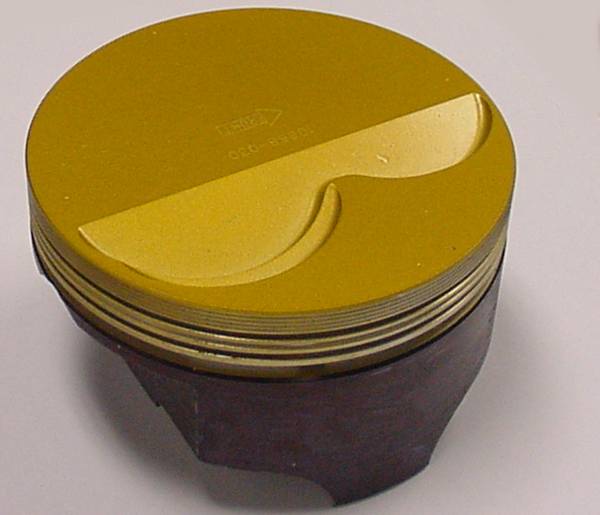 The more highly loaded the engine, the more heat it produces and the more heat the pistons, cylinders and heads have to withstand. Coatings on pistons can help put that heat where it’s most advantageous.

Thermal top coatings on pistons are critical, but perhaps not for the reason you may think. According to one leading coating products provider, most pistons never see more than 400° because if they did, they’d anneal and soften.  So, even if the combustion temperature is, 2,400° for a nanosecond and 1,800° through most of the stroke, the piston’s never going to get that hot. The goal is to keep it from getting too hot, so as not to burn a hole in it, but the thermal barrier function is really to keep heat in the combustion chamber.

The longer heat is maintained further down the power stroke, the more power reaches the wheels, rather than bleeding off into the other components.

Keeping the heat out of the pistons, of couse, also keeps them more dimensionally stable and means  you can run tighter piston-to-bore clearances without fear of scuffing a piston (especially if it has also has a dry film lubricant skirt coating).

A lot of internal engine coatings are all focused on friction, explains a coatings expert that offers services to most OEMs. The variety of types can be overwhelming.

“You’ll see piston skirts with fluoropolymer coatings, which can help reduce friction and load on the engine. A lot of fluoropolymers are used on springs and connecting rods and components for oil shedding as well, In addition, you’ll see bearing cages, bearing races, things like that that can get some anti-friction coatings.

“Specifically with fluoropolymers, there’s hundreds, maybe thousands, of different mixes that different companies will do. There’s a half-dozen different fluoropolymers themselves that are used in these coatings, whether it be for corrosion or for anti-friction, and then there’s different binder resins that could be combined with the fluoropolymer themselves. And with the additives that can be used, it only increases the flexibility of the options. 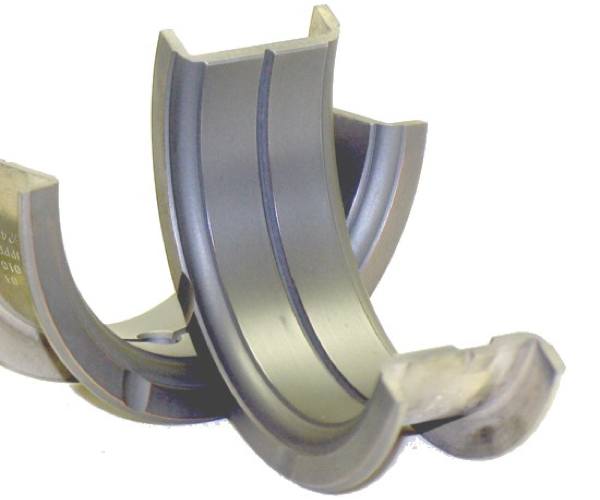 Coated engine bearings are designed to support higher loads in case something goes wrong with the oiling system.

Engine bearing coatings are designed not to eliminate the need for lubrication but to enhance the properties of the lubricants and, certainly, to help prevent damage should lubrication fail.

Rod and main bearings won’t survive very long at high RPM without a protective oil film between the bearings and crank. If the oil film is lost, the bearing will scuff or seize resulting in a spun bearing, a damaged crank journal and/or possibly a broken connecting rod.

Bearing coatings provide a layer of dry film lubrication that takes over when there is little or no oil film in the bearing. That includes dry starts as well as loss of oil pressure while the engine is running. The sacrificial coating provides temporary lubrication that often prevents expensive damage to the crank journals — at least for awhile.

Many bearing coatings also attract and hold oil on the bearing surface. This allows some lubrication to continue even if oil pressure is lost momentarily during hard acceleration, hard cornering or because of high speed cavitation in the oil pump. Many oil pumps cavitate above 5,500 RPM causing oil pressure to fluctuate or even drop. Using coated bearings reduces the risk of bearing damage or failure if an engine has a history of oil pressure problems.

Most bearing coatings are relatively thin, only about .0001 to .0003˝ thick so they should not affect normal bearing clearances. Coatings can also be burnished down to near zero thickness and still provide a layer of protection.

One of the latest applications of bearing coatings is to protect the crankshaft bearings in new cars that utilize fuel saving Stop/Start technology. Many hybrids as well as a growing number of non-hybrids shut the engine off at a stop light or when a vehicle stops moving for more than a few seconds to save fuel. The problem is as soon as the engine shuts off, oil pressure drops to zero and oil starts to drain out of the bearings.

While coated bearings may be more expensive, the benefit comes from the extended life and damage protection realized.

Many times, development of new technology is driven by the OEM. New technology intended to meet emissions  or safety regulations is developed for new car use then adopted retroactively by the aftermarket.

In the parts coating arena, however, that’s not necessarily accurate. In general, OE’s are very conservative with cost and making sure that any performance enhancements or perceived benefits are really there, whereas in the aftermarket, individuals are more concerned with performance and cost may be less of an issue? 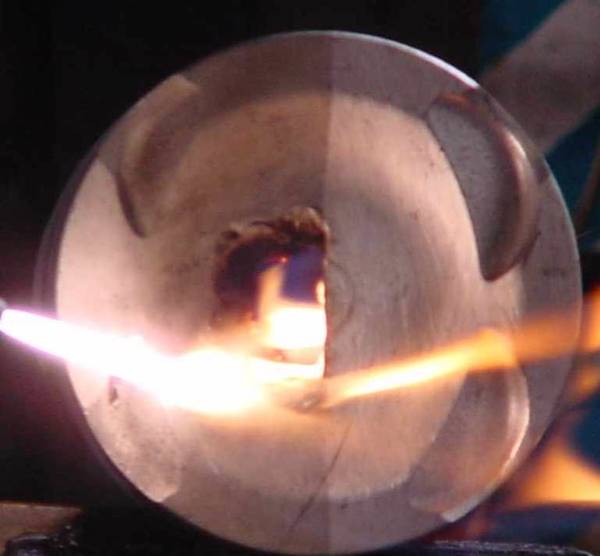 One half of this piston was coated with a thermal barrier coating. The other half was not coated. When twin torches were applied to it, the heat literally burned right through the aluminum on the uncoated side. The straight line indicates where the coating is. Aluminum burned out from under it, but it would not burn through the coating.

Application-wise, the aftermarket tends toward a lot of unique one-off applications and in general, the performance enthusiast is willing to spend hundreds of dollars to get an extra horsepower or two – for the whereas the OEs, it’s got to be really cheap and really easy to get, says a leading parts coating supplier.  “The enthusiast is willing to try lots of weird things, just to see if it works. I think they’re always looking for some kind of a unique advantage. The OEM is mostly just trying to get the job done, looking for cost and durability, whereas the aftermarket guy might be looking for shorter-term performance.

Maximizing that perfomance requires not only the use of the proper coating, but attention to manufacturing as well. Even with years of supporting data, some engine builders may be wary of a coated part’s durability – and that is dependent upon proper application.

Coating suppliers are willing to coat parts for individual engine builders on a case-by-case and will often supply the materials for builders to do it themselves. It’s fairly easy process, say manufacturers but requires attention to detail.

There’s a difference between durability and preparation of the component to be coated. Some people may see that the coating is flaking off or coming off of the part, and a lot of that is simply due to the preparation of the component they are coating. It’s very important to prepare the metal properly to take whatever coating you’re putting on there.

The other component of it is wear. If you’re wearing or chipping or abrading the coating off of there, you may get some particulates or unwanted pieces of the material in the engine.

Many things are driving the use of coatings today, and many of the components in an engine are perfect candidates for coatings. But remember, concludes one parts coater, they won’t solve all of your problems if they’re not applied correctly, the parts aren’t chosen and installed correctly an ant the engine isn’t used correctly.

“Coatings are not the cure-all for issues with a build. Bottom line is if everything were perfect, there would be no need to use coatings on engine components.

“In the real world, engine builders must think about the people using the engines they build because they have no control of how they are serviced.  That is where coatings can help.”

Advertisement
In this article:coatings, parts

The Anatomy of Engine Parts Coatings