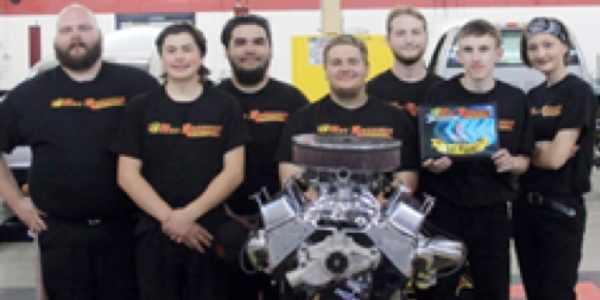 The Hot Rodders of Tomorrow Engine Challenge for the second weekend in a row held two qualifying events over the weekend. Both events were held in new locations and states.

The Hot Rodders of Tomorrow Engine Challenge for the second weekend in a row held two qualifying events over the weekend. Both events were held in new locations and states. Out west in Kaysville, Utah at the Davis Applied Technology College, seven Utah teams competed in their very first Hot Rodders of Tomorrow Engine Challenge.

Of those, one new team qualified for the Dual National Championship while another will be invited as a wild card team. Team Hedman Hedders, (Hunter High School from West Valley City, UT) qualified with the time of 32:59. Just 1 second under the limit. Team Aeroquip, (Box Elder High School from Brigham City, UT) came in second with a time of 33:52. They will be invited to the Dual National Championship as a “Wild Card” team.

In the Midwest in Lenexa, Kansas at the Aeromotive open house and car show. Eight teams competed, of those six qualified for the Championship. Leading the pack at qualifying, Team Aeromotive (Eastern Oklahoma County Tech Center from Choctaw, OK) timed 19:51. Team Flowmaster (Tulsa Technology Center #3 from Broken Arrow, OK) had a time of 25:22. Team B&M (Pontotoc Tech Center from Ada, OK) scored a 29:28.

Team Allstar, (Doherty High School) a new team from Colorado Springs, CO, competed for the first time and came in with a respectable 51:47.

The Dual National Championship is held at the SEMA and PRI Show later this year. A team qualifies by disassembling and then re-assembling a small-block Chevrolet engine in less than 33 minutes, including penalties.

There are now a total of 44 teams that have qualified and 1 wild card team with times ranging from 17:47 to 33:52 to participate in the Dual National Championship held at the SEMA and the PRI Shows. Those students that participate at the Championships will compete for scholarships ranging from $5,000 to $10,000 from five different colleges: Ohio Technical College, University of Northwestern Ohio, School of Automotive Machinists & Technology, Universal Technical Institute and WyoTech.

Advertisement
In this article:Hot Rodders of Tomorrow