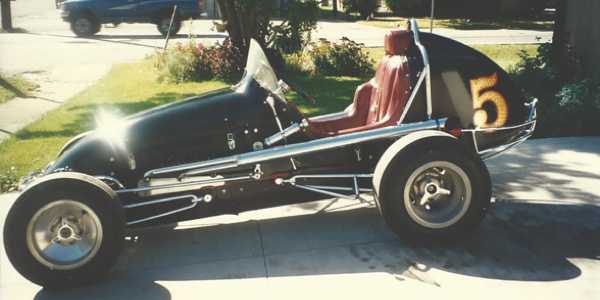 Bev Ringwald, the daughter of the late Graham Heath, is organizing an auction of her father’s collection of racing cars, parts and memorabilia in early June in Madison, IN.

Madison, IN is home to a lot of things – not only is it ranked the 13th most romantic place in Indiana, it’s the home of The Madison Historic District, a National Historic Landmark, comprising a 130-block section of town that includes many examples of exceptional period architecture.

It’s also the starting place of The Michigan Road, the first road commissioned by the State of Indiana in 1826 and the one that stretches all the way north to Michigan City.

But as impressive as those claims to fame are, I must admit, I wasn’t ready to visit the Ohio River town of Madison until I got a call from Bev Ringwald. Bev, the daughter of the late Graham Heath, is organizing an auction of her father’s collection of racing cars, parts and memorabilia. Now, I’m hoping to clear the first two weekends in June to see what historical treasures I can bring home.

Heath died of cancer in 2008 and since then, the family has wrestled with what to do with the decades of memories in their father’s garage. “We’ve been working very hard trying to organize all the stuff in his shop,” Bev told me. “So far, I think we’ve just hit the tip of the iceberg.”

Heath was born in 1924 on his parents’ farm just north of Madison. At age 12, he started rebuilding Model T’s to race and began hanging around the local race tracks, beginning a lifetime love for the sport.

Following military service in World War II, Heath returned to Madison, and – attracted by the Ohio River – turned his racing attention to boats, specifically piston-powered Unlimited Hydroplanes. As crew chief for several iterations of “Miss Madison” hydroplanes, he guided the teams to many different victories and was himself named inaugural Crew Chief of the Year in 1965 by the Unlimited Racing Commission.

But there was always a little bit of dirt in Heath’s blood too, his daughter told me. When turbine engines took over hydroplane racing, Heath decided the pistons in car engines were much more interesting. “As we were going through his shop, we found the pieces and parts he was putting together when he got sick. They were all sitting there neatly organized,” Bev says. “And some of his buddies were helping me organize some things and we found what they think could be a late 1920s or early ’30s Champ Car. It was buried under a whole bunch of stuff and we’re still trying to determine exactly what it was – but what we’ve uncovered is really something to see.”

Based on the list of items so far cataloged for the auction, there’s A LOT you have to see – shop tools and equipment, engine parts including complete engines, long blocks and individual components, wheels, gauges, signs, pictures, furniture and even an old organ from the 1800s.

I asked her about the bittersweet nature of preparing her father’s legacy for auction and, she said, as difficult as it is, it’s a necessary step. “The family all got what we really loved and there’s still so much left! We don’t have room for all of Dad’s treasures and it’s best if people who really know what’s in the shop have a chance to get it.”

I was talking with Bill Holder – Engine Builder contributor and Founder Emeritus of the National Dirt Late Model Hall of Fame and Museum – about Heath’s legacy and frankly, once I told him about the upcoming auction he couldn’t get off the phone quickly enough. He knew that Heath’s garage held history – and I think he wanted to plan his trip to Madison.

Leaving a Legacy One Lap at a Time