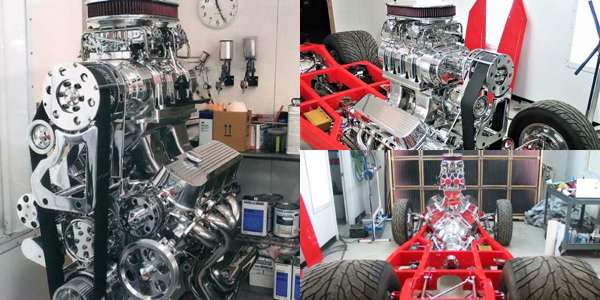 Andy Macchiaverna’s 1932 Ford show car was in need of a new engine. He selected Don Kowalsky of Kowalsky Racing Engines to build a unique big block Chevy engine that only Andy himself could dream up.

Andy Macchiaverna has been a car enthusiast all his life. Along with his older brother, the two have been to countless car shows over the years, including SEMA, and Andy has used those opportunities to get ideas about what he would incorporate into a car/engine build of his own. 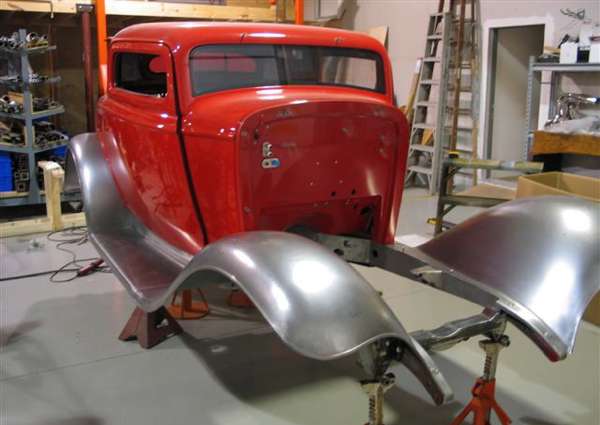 “The car shows were great for getting ideas, and I would talk to a lot of vendors and Chip Foose-type people for advice and ideas as well,” Macchiaverna says.

Andy, who is from New Jersey, finally got his chance to create something special all his own when he bought a 1932 Ford. 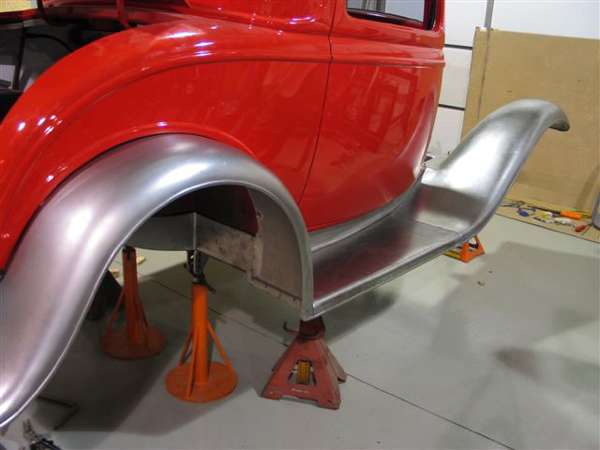 “I bought the ’32 Ford in running condition,” Macchiaverna says. “It had several aspects of it that needed addressing, and as we got into the car and started fixing things, we uncovered much more we wanted to work on. All of that led to a full overhaul of the vehicle and engine.”

Andy reached out to an old New Jersey friend, Scott Lewis, who owns a metal shop in Monroe, VA called Rad Rod Garage, who agreed to help him build the car. 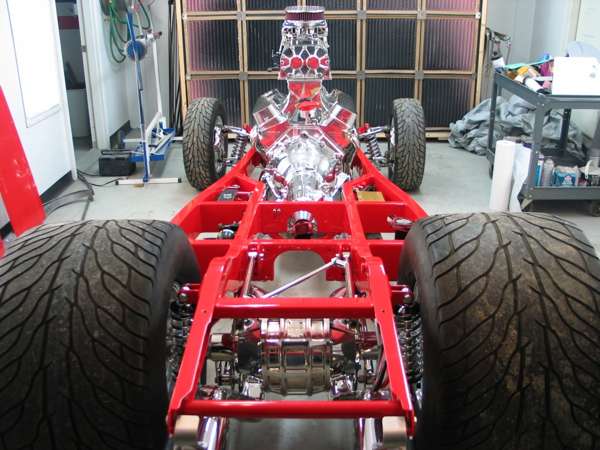 The frame was a C-channel, but with the big tires and the power from the engine Andy wanted to use, the decision was made to box up the frame so it wouldn’t ‘twist into a pretzel.’ 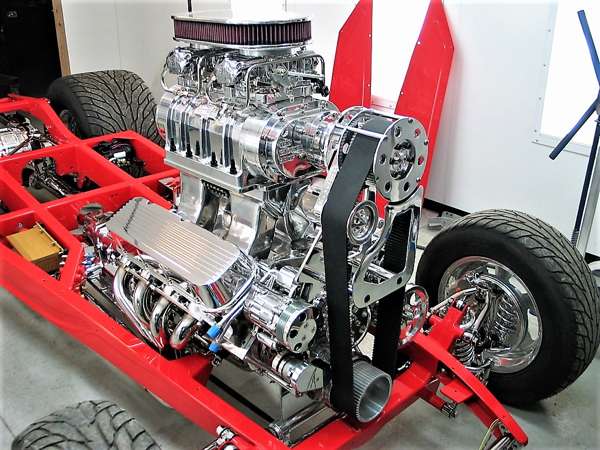 “Once that decision was made, I decided to take out the cast iron block and go with an aluminum big block engine,” he says. “All this work was just a snowball effect.”

Since the car was being worked on in Virginia, Andy had to find an engine builder close by. He settled on Don Kowalsky who owns Kowalsky Racing Engines in Rustburg, VA. 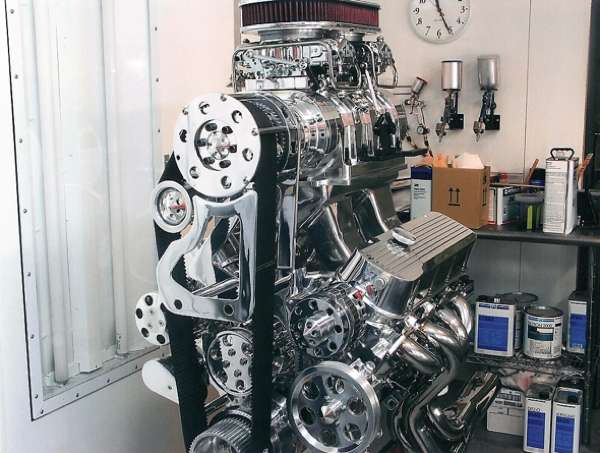 “Ninety percent of the time you see cars with a small block motor,” Andy says. “For me, I wanted to make a statement using a big block. I also used a blower, which looks better and more proportional on a big block. You just don’t see as many big blocks in comparison to the small block engines.”

The engine Andy had Kowalsky build is a 454 big block Chevy with an 8-71 Blower Shop billet blower. Andy was very particular about how his engine looked. He doesn’t care much for cast iron or too many ‘distracting’ colors. 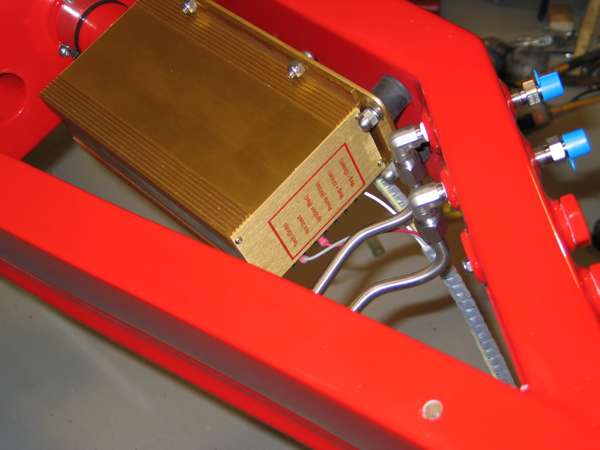 “I always said if I was going to take on a build of this nature, I wanted to have everything aluminum as opposed to cast iron,” he says. “Aluminum is lighter and can be polished up way more than cast iron ever would. Everything on this engine has a polished look to it. In fact, some people ask me if the engine even runs due to its look. Trust me, it runs.”

The engine runs to the tune of 765 hp. To get this unique look and the high horsepower, Andy incorporated several aspects to the engine that only he could dream up. 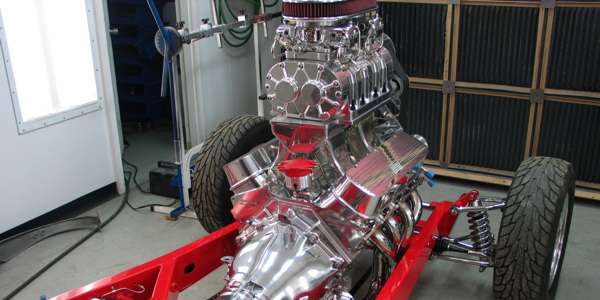 “The blower is on a tunnel ram manifold, which is very, very unusual, and is one of the only pieces on the motor that is cast,” Macchiaverna says. “Nobody would really ever do that, and I’m not sure that I’ve ever seen that on any motor. At the time, there was a place in Florida called Boost Daddy. The shop is no longer in business, but it had a machined adapter plate to accommodate the blower to go on top of a tunnel ram manifold, which is normally just two, four barrel carburetors. That is why the motor looks as outrageous as it does vertically speaking. The height of the motor will probably be the same as the roofline of the car.” 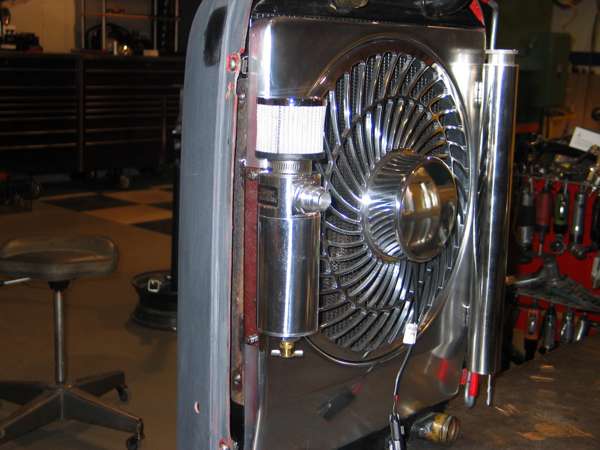 The engine uses a polished billet Dart block and also incorporates Holley’s HP EFI with two throttle bodies on top, an Innovators West aluminum damper, Edelbrock aluminum heads, Diamond pistons, a Callies crank, one-off polished stainless headers, and polished billet valve covers. Even the electric fan has a polished billet cover on it, as opposed to black plastic. The ignition is a MSD 10+, which looks like a big gold brick mounted to the inside part of the frame. 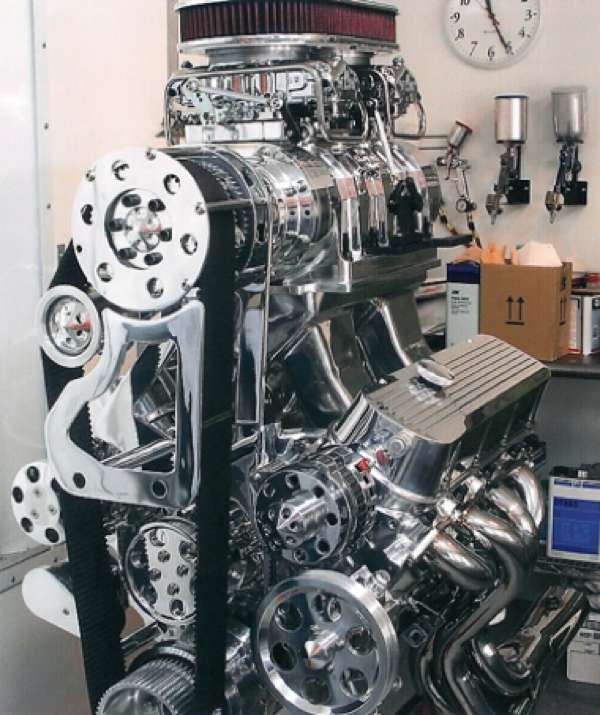 “Scott Lewis also incorporated a polished aluminum nose cone in the blower idler pulley and the top blower pulley,” he says. “There’s a vacuum pump on the motor that, although it helps keep a vacuum in the crankcase, is there mainly because it’s polished billet. Everything on this engine and on the car is polished, and all the welds are ground smooth. Even the frame of the car is that way.”

It is Andy’s intent to have the car be a trailer queen initially and bring it to the Detroit Autorama and enter it for the Ridler Award once it’s finished. 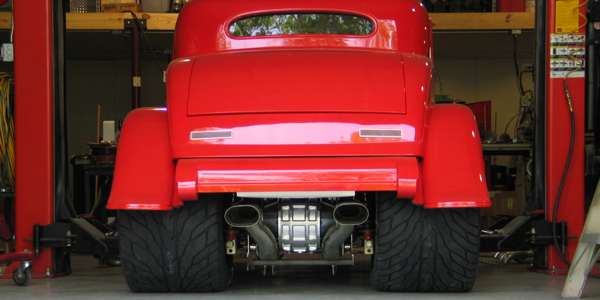 “I would never expect to win that show, but maybe I could be one of the Great 8,” he says.

No matter the outcome of the Ridler Award, there’s no taking away the fact that Andy has a unique engine on his hands.

Advertisement
In this article:Big Block, Chevy, Engine of the Week