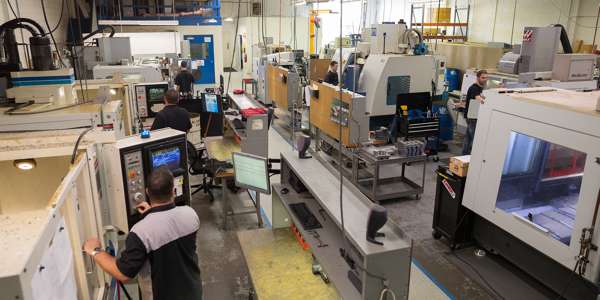 Having the right tools for the job seems about as obvious as closing the windows during a thunderstorm or turning on the headlights at night, but it’s not so black-and-white when it comes to outfitting an engine shop.

More often than not, lacking tools – or simply not having enough of them –  is the problem. Investment costs and business growth that exceeds estimations are the primary culprits. And there’s always the question of which tools are really necessary.

Katech, the Michigan engine design and manufacturing specialist that’s been building high-performance street engines and custom racing engines for 40 years, has kept ahead of the game with its investment in tools and technology. In those four decades, the engines built and tested within its Detroit-area walls have powered dozens of driver and manufacturing championships for the world’s most prestigious racing series, from NASCAR to road-racing, as well as forays into off-road racing and marine engines.

“Managing growth, customer needs and keeping with continual technology changes is a challenge,” says Garry Franklin, Katech’s director of manufacturing. “More than a big tool box, we’ve incorporated the technologies and capabilities required to sustain and serve our projects when there aren’t any additional outside resources.”

Custom part production is a core capability for Katech, which is often leading the industry or pushing boundaries for racing-engine development.

“Often, an OEM will come to us to build engines for a factory racing program, making us the first and sometimes only builder for a particular engine platform,” says Franklin. “In those instances, we can’t simply call up a parts distributor or racing parts vendor, because the parts simply don’t exist. That leaves it to us to design and build the parts we need, whether it’s custom piston oil squirters, valvetrain components or just about anything else you can think of.

“Our five-axis mill is working all the time on new parts for us,” he says. “It offers minimal setup time and produces parts quickly and with high quality. It’s a must for us, because it will produce a single component or 1,000 of them.”

In fact, Katech’s manufacturing capability is offered to other engine builders looking for custom parts and they can even assist with design. “Say a smaller engine shop needs something that’s simply not available from other manufacturers – Katech can help,” says Franklin. “Whether it’s a one-off custom piece or a run of components, we have the capacity to make it work.”

Katech also keeps other three-, four- and five-axis mills busy up to 15 hours a day making parts and porting cylinder heads. The heads are not only used for custom racing engines, but are part of Katech’s expanding range of off-the-shelf, high-performance parts and in-house line of engines for the street and track.

“Being ahead of the curve with certain engines has its advantages for the retail side of the business,” he says. “But building, testing and running engines sometimes months or more than a year before anyone else, we are able to develop parts and engine packages before other competitors in the aftermarket performance industry.”

When the liners are finish-honed, the LT1’s original 4.060˝ bores are stretched to 4.125˝. That allows Katech to build 7.0L versions of the engine that mirror the successful parameters of the previous-generation LS7 engine. Along with supporting the larger displacement, the new ductile iron liners flex more than the more-brittle original liners, which helps prevent cracking under very high cylinder pressures.

“We experimented with other bore/stroke combinations and this is the best solution for building a larger-displacement LT engine,” said Jason Harding, Katech’s director of aftermarket operations. “It maintains an optimal bore/stroke ratio for high-revving performance and excellent durability. With stronger sleeves than the originals, you can add power with the confidence the block will stand up to the pressure.”

There are, however, areas of expertise that Katech leaves to, well, the experts. 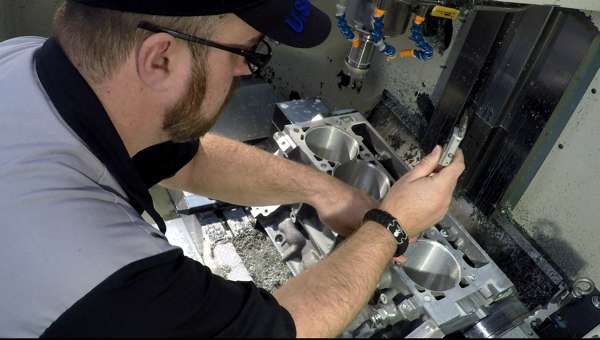 “Engine components such as camshafts, connecting rods, crankshafts, as well as pistons — there are excellent manufacturers who design and build them day in and day out and we rely on that,” says Franklin. “We have the capability of building and/or machining those parts, but it comes down to efficiencies and building the best value for our customers. It is more cost-effective for us and our customers to let the respective specialists in those arenas do their best for us.”

That’s not to say Katech doesn’t have input on those parts. They do. In fact, they typically specify unique camshaft grinds or even supply unique piston head designs for the manufacturers to produce.

“It leaves more time for our mills to produce truly custom parts,” he says. “It’s part of our value proposition to our end user customers.”

Industry-wide advances in engine design and manufacturing will only make the reliance on the right tools all the more important, according to Franklin. He sees it in the advanced combustion technologies such as high-pressure direct fuel injection and the creep of technologies such as variable valve timing into racing engines.

“Direct injection is already part of many racing series and variable valve timing is coming,” he says. “Beyond the racetrack, however, is the fact that more and more engine builders and rebuilders will be dealing with them with production-based engines from their customers. You’ve got to be ready, because your customers will ask for it.”

Along with the engine technologies comes engine-building tolerances and machining tolerances that were practically unheard of a generation ago. 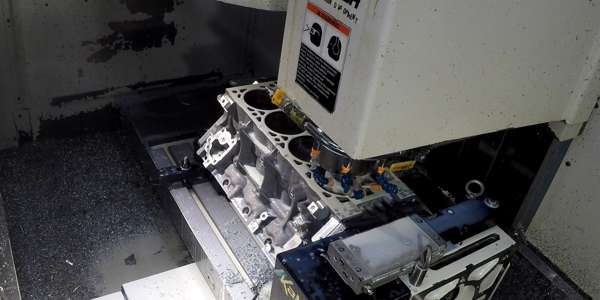 “The margin for error is smaller than it’s ever been,” says Franklin. “The parts are more intricate, the tolerances are much tighter and the experience to support the needs surrounding them is more critical. Having the tools isn’t enough. You need trained personnel who can make the most of them.”

In that regard, Katech – like so many other custom engine builders – is always searching for qualified engine builders and technicians who can program and run the mills.

“They’re also part of our tools resource,” he says. “The engines won’t build themselves and the mills won’t build anything without programmers and operators. It’s all part of striking the perfect balance for your shop.”

After 40 years of successful engine programs, parts design and manufacturing, Katech appears to have that balance down with cool precision.

For more information on having parts custom created or to learn more about the machines used in this shop, visit www.katechengines.com.