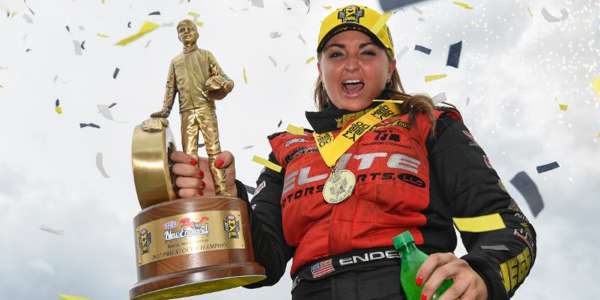 Melling Performance sponsored driver Erica Enders raced to her first victory of the electronic fuel injection era Sunday at New England Dragway with an impressive run through a gauntlet of 2017 winners in her Elite Motorsports Chevrolet Camaro. It was the two-time champion’s first win since the 2015 fall race in Las Vegas, a span of 35 national events.

“People always ask which win means the most and right now I can’t imagine one meaning more than this,” Enders said. “What a huge relief. What a special moment for all of us on this Elite Motorsports team. Money can buy a lot of things but you can’t buy the drive to win this group has inside them.

“This is for my crew. This is for Rick Jones, the best crew chief in the sport. This is for Richard Freeman (team owner) for never giving up on us. Other wins have meant other things, but this one will always be very special.”

After an unopposed opening round, Enders didn’t have the advantage of lane choice in her final three races, but she overcame the deficit with raw driving skill. Her wins over Line and Butner came via holeshots, meaning she used a better reaction time at the starting line to win those races, even though she posted slower elapsed times. By the final, the Elite team had their car in perfect trim, and she beat Gray from end to end.

“I didn’t want to give up anything today,” Enders said. “In fact, I wanted to have my best day behind the wheel that I’ve ever had. I have always prided myself on what I can do in the driver’s seat and today I feel like I gave it all I have. Aside from Round 1, it was a really tough battle every round.”

The day started with Enders getting an unexpected free pass after Round 1 opponent Shane Tucker failed to make the call due to an expired motor. She went on to run a 6.551 at 212.90 mph.

“That ended up being the closest race of the day,” Enders said. “But at the time, as pumped up as you are, you know you’re only halfway to your goal.”

“Bo beat us in the Atlanta final so I guess we’re even now,” Enders said. “He’s been so good all year. That was another huge round win right there because that team has been so strong.” 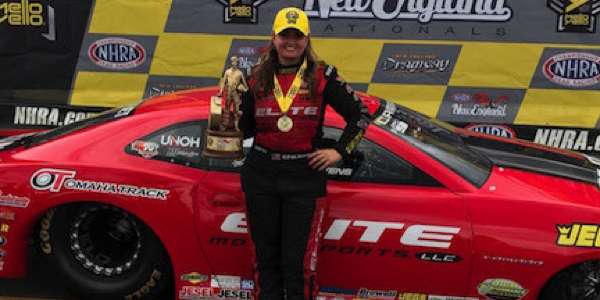 Digging deep with the trophy up for grabs, Enders improved to 2-0 versus Gray by winning their head-to-head finale straight up, leaving the starting line first and arriving at the finish line with a 6.534 at 213.16 mph to Gray’s trailing 6.550 at 212.06 mph.

“The feeling of seeing the win light come on is something that’s impossible to describe,” Enders said. “Even in 2015 when we won nine times, I still felt extremely blessed for every win we earned. It’s always going to be that way because it’s so hard to do.

“The entire Elite team is ready to explode. I hope this opens the flood gates and we start winning a bunch more. I know Jeg (Coughlin) and Vincent (Nobile, teammates) are anxious to get theirs as well.”

Up next is the 48th annual NHRA Summernationals at Old Bridge Township Raceway Park in Englishtown, NJ.