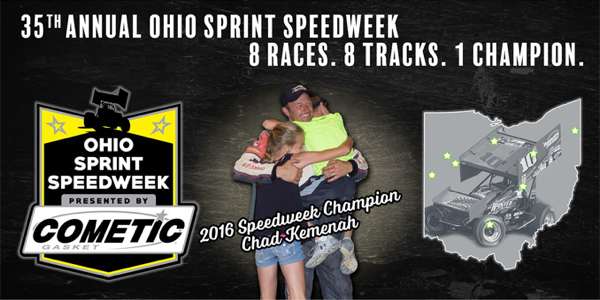 Returning for a third straight year, Concord, Ohio-based Cometic Gasket, a worldwide supplier of gaskets and engine sealing solutions, will be the official engine gasket of Ohio Sprint Speedweek, as well as the presenting sponsor for the entire eight-race campaign.

“We are proud to associate ourselves with Ohio Sprint Speedweek, as well as the Arctic Cat All Star Circuit of Champions,” said Bob Gorman, founder and CEO of Cometic Gasket. “Cometic is rooted in motorsports and we appreciate being a part of such a long-standing tradition. Dirt track racing is the backbone of all things motorsports, as well as a major market for our organization. We hope to see everyone at the track.”

Ohio Sprint Speedweek presented by Cometic Gasket will ignite on Friday evening, June 16, at Attica Raceway Park in Attica. The annual Speedweek opener will be followed by appearances at Eldora Speedway in Rossburg on Saturday, June 17; Waynesfield Raceway Park in Waynesfield on Sunday, June 18; Wayne County Speedway in Orrville on Monday, June 19; Sharon Speedway in Hartford on Tuesday, June 20; Muskingum County Speedway in Zanesville on Thursday, June 22; Limaland Motorsports Park in Lima on Friday, June 23; and Atomic Speedway in Waverly on Saturday, June 24. The only off-day, scheduled for Wednesday, June 21, will be used as a potential rain date for any of the events contested on June 16-20. Each event will award a $5,000 top prize, as well as full points toward the 2017 Arctic Cat All Star Circuit of Champions title chase.

Similar to 2016, points will be tallied over the course of Ohio Sprint Speedweek with the top-ten finishers in the overall standings sharing a portion of a $3,000 point fund. In addition, multiple win bonuses will also be up for grabs on behalf of Cometic Gasket. Teams that accomplish two or more victories during Ohio Sprint Speedweek will be eligible for a bonus equalling at least $500. Two victories will solidify a $500 bonus, and as the win count increases, the bonus total will also increase. Teams that accomplish at least three victories will be awarded an additional bonus of $3,000. An additional $4,000 will be given to any team that can visit victory lane four times over the duration of Speedweek and if any single team can win five races, a $5,000 bonus will be awarded. The total bonus for any one team winning two events: $500; three events: $3,500, four events: $7,500; five events: $12,500.

Chad Kemenah, the most recent winner during Arctic Cat All Star competition at 34 Raceway in Burlington, Iowa, will lead the Arctic Cat All Star charge into Ohio Sprint Speedweek presented by Cometic Gasket as not only the defending Series champion, but also as the defending Speedweek champion, earning his second in 2016. Kemenah, who owns three victories on the season, sits on top of the current title chase with an impressive 180-point lead; an advantage equalling over one entire program.

“Sprint car racers and fans alike look forward to Speedweek each and every year. It’s grueling. It’s long. It takes a lot of sweat, hard work and dedication, but I’m sure the racers wouldn’t have it any other way,” Tony Stewart said, owner of the Arctic Cat All Star Circuit of Champions. “I want to thank all of the tracks and other organizations for helping us put this together, especially Cometic Gasket. The amount of support Ohio Sprint Speedweek attracts is overwhelming. I’m confident this will be around for another 35 years.”

Those seeking additional news and notes regarding Ohio Sprint Speedweek presented by Cometic Gasket should visit each facility live on the Web. Information pertaining to ticket prices, reserved seat information and support divisions can be found online.