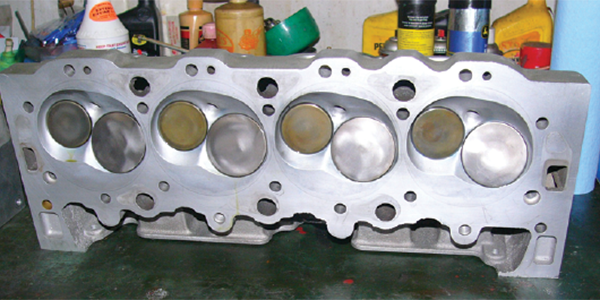 Titanium or Ti, is an element that has been around a while. An English clergyman interested in metals named Rev. William Gregor is credited with the discovery of it in 1781. The name titanium comes from the sons of the Earth Goddess in Greek mythology, also known as the Titans. 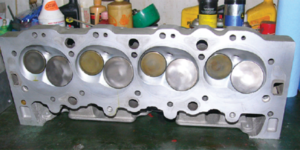 Titanium or Ti, is an element that has been around a while. An English clergyman interested in metals named Rev. William Gregor is credited with the discovery of it in 1781. The name titanium comes from the sons of the Earth Goddess in Greek mythology, also known as the Titans.

Titanium then, as now, is known for its high strength-to-weight ratio. It is not as surface hard as a heat-treated steel, but still very strong. Titanium is 60% denser than aluminum, but twice as strong as the most commonly used 6061-T6 aluminum. Titanium is 45% lighter in weight than steel.

My first recollection using titanium was with my Pinto Pro Stocker I acquired in September 1975. The turnkey Pinto had a Gapp and Roush 366-inch Cleveland. All the valves were titanium. From late ‘75 to present, I used only titanium valves in my Pro Stock cars and later my three Pro Modified cars.

I experienced first hand the attributes of lightweight titanium valves. Besides being 45% lighter than steel, you drop a titanium valve, the damage is a lot less than any steel or stainless steel valve. A dropped steel valve can destroy the whole engine. Titanium damage is not so severe.

In 1977, on two occasions, with different 351 Cleveland iron aluminum high port exhausts, I acquired some used PS ragged, but super trick heads. One set a friend gave me to try. It was blended so smooth I did not detect there was a replaced exhaust seat. If I had known I would not have run them.

That set powdered out in a shower of sparks out my header on the first run inside a fresh 342-inch short block. When I took the engine apart, I was amazed. The titanium valve was not hurt. And the machined seat pocket looked like it was just cut.

The second time that happened, I was again trying some well-used Cleveland PS heads. It was Wednesday night at the Gateway and Jerry Haas and I were booked as a feature match race. It had rained all day and the track was slick. On the second run my Pinto seemed to nose over at 1,100 feet. I had to pedal so much it was hard to be sure. When we got back to the pits I started the engine. Blap! Blap! Blap! A dead miss. My crew chief Rick Davis and crewman Cliff Sturm and some fans informed me instead of seeing Elvis, a shower of sparks came out the right side header at about 1,000 feet. I was pretty sure what that meant. We took the valve covers off and immediately found number 4 exhaust rocker was tight. The spark plug looked like it had been shot peened.

Jerry and I had a third run to do. The contract read three runs for 100% of the agreed fee. Two runs would be 25% less. We only had 30 minutes to get ready for our final match. It was 11pm and rain was threatening again.

Due to my prior experience losing a seat and not hurting the titanium valve or the seat cavity, I made a bold decision. I adjusted the rocker to the required lash and checked the lash on the rest of the rockers as normal between rounds.

We started the engine and amazingly it sounded better. It still had some blap, but not nearly as prominent. I went up and won the match race. Jerry had to pedal again, but being down on power allowed me to get down the track smoother. No record, but we got there first, and I got 100% of my fee.

Before loading up we checked over the engine. It appeared my educated gamble paid off. The lash on number 4 exhaust was still .035˝ – just as I had set it. We pulled the number 4 titanium exhaust valve out of the head, and found no damage just like the other time.

I stripped the two heads that lost their seats and shipped them out to Indy Cylinder Head to weld the existing cut out cavities up and shaped into permanent seats.

I learned a lot that year, and whatever I learn I pass on to my customers’ projects. Whenever dealing with iron maximum prepared Pro Stock-type Cleveland heads, especially old ragged ones, check to make sure no replacement seats have been installed.

Another time I came across titanium engine parts was at the 1992 PRI Show in Columbus. A young enthused racing rod developer approached me about using his new titanium connecting rods. But I turned them down because I was leery of using them along with nitrous. Titanium rods are much harder than aluminum and would hammer rod bearings out like steel rods. Secondly, I already had a deal with Bill Miller and I was very sponsorship loyal.

It seems titanium rods have a place however. Some stock factory hot rod cars use them. But from what I have researched, titanium rods are not for big-inch, powerful, high-winding engines, especially with power adders. David Reher prefers aluminum rods for his drag race engines. Of course as most know, rods do need to be replaced frequently.

Where I have been seeing titanium used more and more is in valves. I’ve even seen titanium valves used for Super Pro and Pro Brackets. A while back I had three brands of engines along with three sets of Big Block Chevy Brodix heads in my shop. The usage ranged in category from the Hot Rod Tour to Super Pro Bracket to Top Sportsman, Top Dragster and Nostalgia Pro Stock – all with titanium valves.

Titanium is expensive, but like Richard Petty coined about the wall, I say titanium is your friend.

Titanium and Other Engine Friends