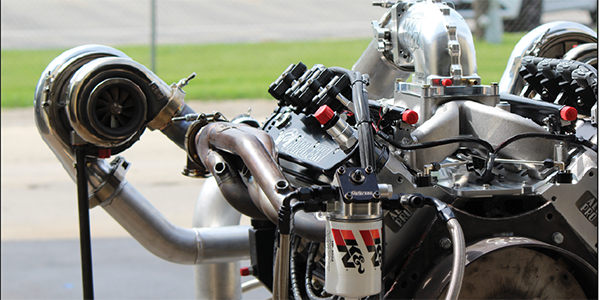 In recent years, power adders such as turbos and superchargers have become very popular. They seem to be gaining popularity as the years continue to go by. 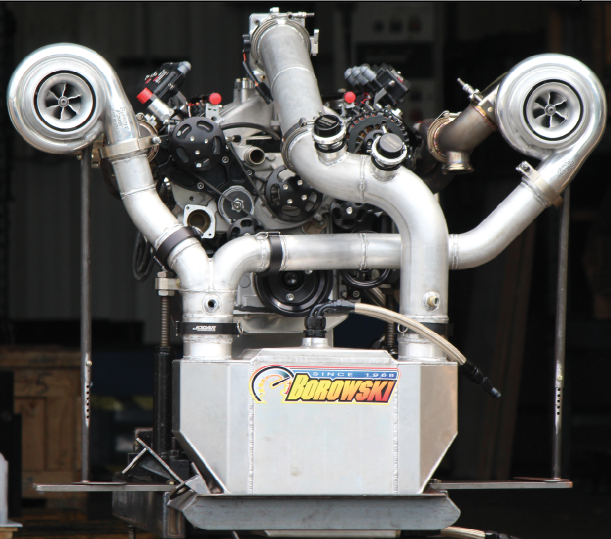 In recent years, power adders such as turbos and superchargers have become very popular. They seem to be gaining popularity as the years continue to go by. This craze continues in both motorsports and street applications where the use of either power adder is becoming commonplace.

But, if you think about it for a while, the use of turbos and superchargers has actually been around for years yet the power potential is just now being recognized. I remember in 1986, being at the Bristol, TN dragway and watching Buddy Ingersoll upset the entire Pro Stock field with his turbocharged V6 Buick against 500 cid V8s.

I was impressed with the performance of the V6 Buick, but frankly had no clue or interest as to what was going on with a turbo engine. Being at a drag race it was always awesome and intriguing to watch the top fuel engines along with top alcohol running superchargers.

Several aircraft engines from World War II utilized superchargers. It’s rather interesting that these devices have been around for many years and are frequently used, but now have become a major player in just about everything. Today, automobile manufacturers utilize either one or the other in production engines for daily drivers.

So why all of the sudden did we start realizing the potential of either power adder? I believe it’s because with today’s technology we can finally learn how to harness the power. Not only with the aid of fuel injection but with the use of highly sophisticated instrumentation in the dyno cell that aids in the design and efficiency.

The object of my recent search was to find out what was trending today in the racing world. I wanted to get an idea of what strategies engine builders were using when building an engine for either one. Now for racing purposes, the focus is not on the bottom end of the engine such as crankshafts and connecting rods or the engine block. If any amount of power is going to be made, these components should be at their best before we even begin. The focus here will be on components such as pistons, rings, cylinder heads, rod length, and cubic inches. We’ll cover the turbo side of things first and then move over to the superchargers. 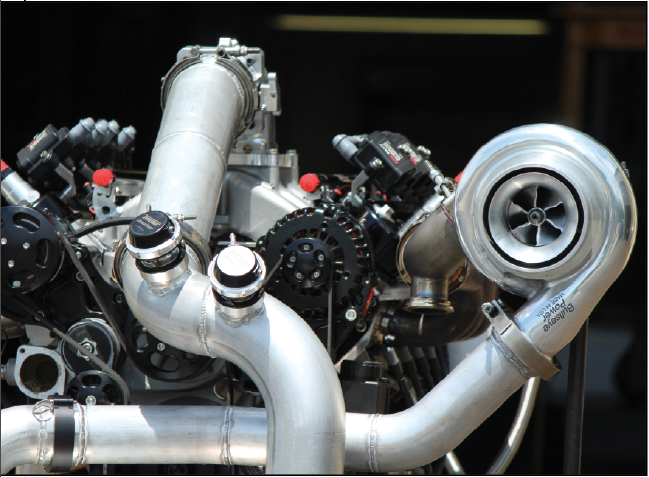 When building a turbo engine, one of the most common mistakes made is the wrong choice of cylinder head. For some reason or another, it is assumed that since you are going to be forcing air into the cylinders you need a huge intake port. Another misconception is when building for alcohol instead of racing gas. The pattern of thinking among  some builders is that you are trying to move more air (especially if using alcohol because you use twice as much fuel compared to gasoline), so you better use a larger port size.

True, port size and valve area dictate how much cfm the cylinder head is capable of. But, the fact is cfm relates to how many cubic inches can be fed. An engine runs and makes power on the premise of the equation of lbs./hr. of air, which translates to density, not cfm. A turbocharged engine is going to consume the same amount of air, but it will be more dense.

Optimum compression of a turbocharged engine is still a hot topic of discussion. This usually will depend on many factors of the engine such as displacement (bore and stroke) and cylinder heads. Most engine builders will use somewhere around 9.0:1 to 10.0:1 compression ratio. This can be somewhat challenging because most efficient engine combinations use the strategy of big bore and small stroke to achieve the cubic inches desired.

To help achieve lower compression it is best to use a cylinder head between a 12- and 15-degree valve angle. There are plenty of cylinder heads produced that have less valve angle such as 10 degrees, but this also makes the combustion chamber shallower.

The ideal situation is for the combustion chamber to be as big as possible and to incorporate the use of a domed piston. Domed pistons are usually specially designed by the engine builder and will usually have no valve reliefs – they’re designed to reduce flame travel. This is contrary to what has been practiced in the past (use of a flat top piston), but flame travel becomes an issue when making big power.

In a shallow combustion chamber, when the fuel mixture is compressed the highest concentration will be around the intake valve pocket of the cylinder head. When the spark plug fires, the mixture formed around the intake valve burns first, causing the piston to travel down making the power stroke. As the flame front moves across the combustion chamber, it will burn off the remaining charge that is trapped around the exhaust valve.

By this time the piston is well on its way down and returning to the top. This “end gas detonation” tends to wreak havoc on the bottom end causing a fast gruesome death to the internal components of the engine. The use of larger combustion chambers tends to reduce end gas detonation and the dome piston helps slow down the flame travel, which will slow down the burn.

More dense air and fuel have been forced into the engine so power is not the problem as to controlling the heat generated by the work that has been done. For best results, it is better to use alcohol to help keep cool. Gasoline will produce more heat.

The ideal size of power plant of course will depend on use and application. Most engine builders tend to use displacements between 360 to 400 cubic inches. Keep in mind that the biggest bore and smallest stroke for the cubic inch desired will yield more volumetric efficiency.

One key factor here is that builders often associate boost with power. In actuality, boost should be viewed as a restriction. If you have pressure in the intake manifold, then air that was generated by the turbo is not being used and just sits in the intake collecting heat. Power with a turbo is made by using good combination of parts such as camshaft, cylinder heads, intake manifold and headers, as well as a properly sized turbo working together to move air in at the right time and make power with the least amount of boost. 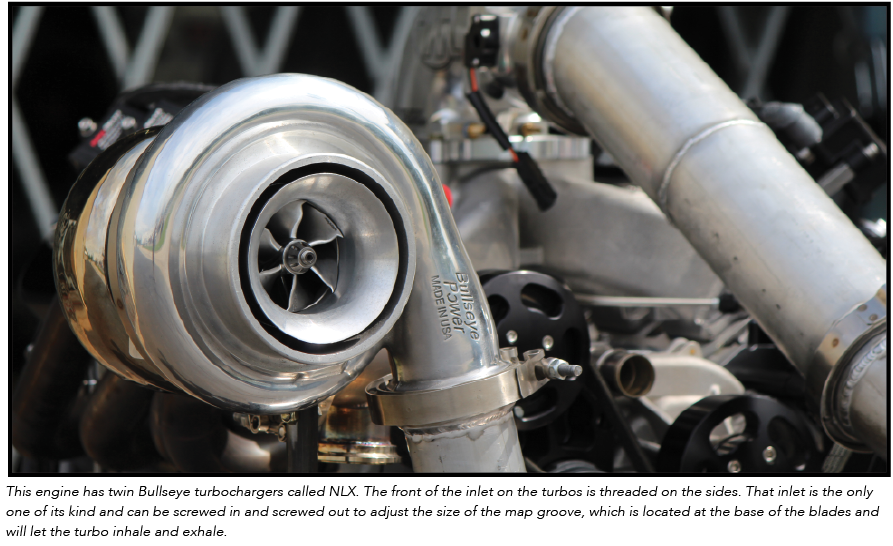 For supercharging an engine, there are several approaches taken by engine builders that are different from those of turbocharging.

When choosing a cylinder head, it is best to choose a cylinder head with bigger intake ports, especially if the fuel being used will be alcohol. When using alcohol, it is best to use 10% to 12% more port volume because you are going to be moving more fuel. Even if alcohol is not being used, bigger port volumes are necessary because you want to slow down air speed. This is because the supercharger is forcing air and fuel into the combustion chamber.

For the exhaust ports, you want them as large as possible along with the header pipe size. This will help eliminate any restrictions in the exhaust system. A good thing to point out here is when the exhaust valve opens, the cylinder has to blow down quickly. While this will be directly dependent on the camshaft timing, the exhaust has to get out of the cylinder quickly.

A good example would be the top fuel engine running mechanical injection. If the exhaust pushrod breaks (which is common)the block will split apart from the trapped exhaust gas in the cylinder bore. It has no place to go and research has shown that in a top fuel engine under power, the exhaust valve has to open under cylinder pressures in excess of 10,000 psi.

Something else to think about with mechanical injection is what happens if the fuel in the cylinder does not ignite. This is commonly referred to as hydraulicing, where the unburned fuel sits on top of the piston. Because of cylinder pressure, the unburned fuel “S” shapes the cylinder rod in that cylinder. The connecting rod is the weak leak in the chain that will take the grunt of the blow from the unburned fuel.

This also can differ depending on what material you use for connecting rods. Some builders argue that aluminum rods accelerate quicker. Well, that may be true but never clarified because the mass is lighter.

Aluminum rods are often used in nitrous motors and heavy supercharging because of their ability to absorb and handle shock loads. Nitrous engines are very different from supercharging and turbos. A nitrous engine is very violent and things happen quickly. When nitrous and fuel are injected into the cylinder, pressures rise along with heat very quickly.

For turbo and mild supercharged applications, steel rods are preferred. Turbo engines accelerate and cylinder pressures rise and descend more smoothly than in nitrous engines, so there are no violent spikes in cylinder pressures.

Regardless whether you are turbocharging or supercharging, always pay attention to the recommendations of the manufacturer. Bigger does not always mean better, especially if it causes more heat or more boost than can be utilized for the application.

Turbocharging and Supercharging: Are We Just Discovering the True Potential?