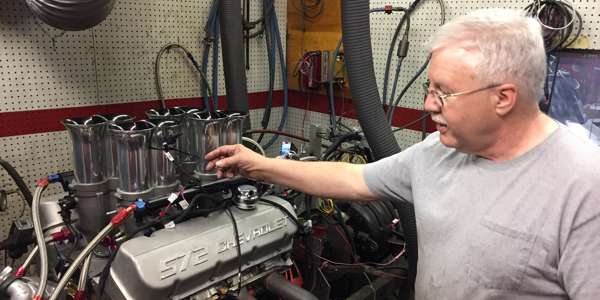 If you remember about a year ago in the pages of Engine Builder, we highlighted a shop in Cleveland called Victory Engines. The title of that story was ‘To the Victor Go the Spoils.’ Foreshadowing being what it is, Victory Engines’ owner Ray Banyas has again claimed a victory by being named the 2016 Vintage Engine Builder of the Year.

If you remember about a year ago in the pages of Engine Builder, we highlighted a shop in Cleveland called Victory Engines. The title of that story was ‘To the Victor Go the Spoils.’ Foreshadowing being what it is, Victory Engines’ owner Ray Banyas has again claimed a victory by being named the 2016 Vintage Engine Builder of the Year. The annual competition and award was again sponsored by Federal-Mogul Motorparts’ brands Speed-Pro POWERFORGED Pistons and Fel-Pro Performance Gaskets.

Ray Banyas makes some adjustments to a customer’s 572 Chevrolet engine before firing it up for a run on the Stuska dyno.

In case you didn’t read that previous article about Ray and Victory Engines in 2016, or you haven’t met Banyas to understand why he was nominated and ultimately won the Vintage Engine Builder of the Year, here is an overview of the shop and its history.

Founded in 1926 by Merridth Myles, the shop, which was then called Myles Engineering, built engines for, and raced in, the AAA sanctioning body as well as IMCA.

Upon Merridth’s death in 1963, his son Gary assumed the duties of running the business. In 1970, Banyas, a young drag racer at the time, started performing cylinder head work for the shop and engine building has been his life’s work ever since.

“It’s really good to do something your whole life that you love,” Banyas says. “It has its moments like any other business, but I’ve been blessed to be able to do what I love my whole life.”

Fast forward to 1995 when Gary Myles retired: Ray was given two weeks to decide if he wanted to buy Myles Engineering and go from long-time employee to owner of the Cleveland-based engine shop. The alternative? The business would shut down after being open 70 years.

“A friend of mine said, ‘You might as well try it. You’ll kick yourself if you don’t try after as long as you’ve worked there. It’s okay to fail, but if you don’t at least try it, you’ll be wondering the rest of your life if you could have done it or not.’ So I did it and here we are 22 years later,” says Banyas, who changed the name to Victory Engines after purchasing the shop. 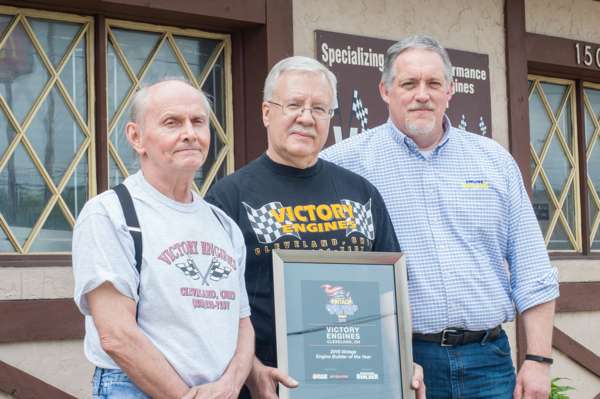 Over the years, Victory Engines has served racers and enthusiasts ranging from Stock Car, Super Modified and Sprint Car ranks to the quarter-mile drag racer, both local and national.

Inside Victory Engines, it is evident that the shop is no stranger to diversity and volume of work and is willing to take on almost any job that comes in the door. What is now the shop’s main work area was added on in 1977. Before that, the engine shop consisted of just two rooms in what is now the back of the building. In total, Victory Engines has 4,850 square-feet of space filled up by numerous Sunnen and Van Norman machines, Chevy, Ford, Buick, Nissan, and Pontiac engines in for work, spare engine parts, a dyno room, a front office and desk area, and storage space.

For the past 10 years, Victory Engines has largely been a two-man operation. Employees have come and gone, but one man has been at Ray’s side since 1993, and that man is Phil Hartsel. Aside from Ray and Phil doing quality engine work over these last 22 years, not much else has remained the same.

“Not much has changed in terms of how we go about building our engines, but there used to be more business from racing than there has been lately,” Banyas says.

“We used to get a lot of Super Modified and Sprint Cars, which are few and far between now,” Hartsel adds.

Right about the time Ray bought the business, the writing was on the wall that Super Modified car counts were dropping.

“The numbers were stagnant for a few years, but it’s really dropped off now,” Banyas says. “The reason is primarily how expensive it has gotten to race these cars.” 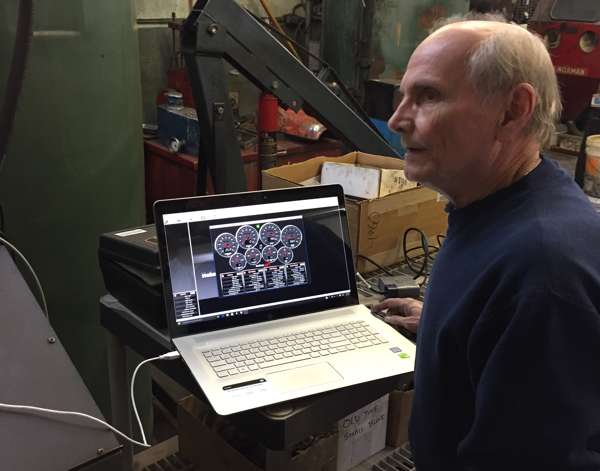 Victory Engines has been getting more involved with EFI systems. Phil Hartsel is seen here running the program for a dyno pull.

Ray’s son, Jeff, ran Sprint Cars on dirt for 5-6 years. He started off in Quarter Midgets, then 360 Sprint Cars on dirt, then 410s, and then ran the asphalt 305 series. Jeff then picked up Super Modified racing where he won rookie of the year. And finally, he ran an Auto Value Super Sprint 410, winning one race at Dixie Speedway in 2009.

“With the expense that it is, I’m only going to do it for my son,” Banyas says. “We don’t do any sponsorships at the shop. However, I do help a lot of racers we do work for. I’ll go out to the racetrack and make sure they get off to a good start.”

But the fact remains that the amount of race engine work the shop gets has been on the decline. “Back in the day you’d go to the racetrack in Sandusky or Lorain County  Speedways and there’d be 35-50 Sprint Cars and Super Modifieds,” he says. “Now, you’re lucky if you get 18 cars on a good day. A lot of the time you have only 12 cars.”

The addition of a lot of these vintage jobs is why Banyas and Victory Engines were voted Vintage Engine Builder of the Year.

“It’s really interesting when someone brings an older engine in,” Banyas says. “It gives us a different challenge too. Rather than building a small block Chevy we get to see all kinds of different engines from different eras. John Brubaker, who nominated us for the award, had us build a 1965 in-line, six-cylinder Ford engine. We do work on Pontiacs, Fords, HEMIs, Buicks, and so on. Those are fun projects to work on.” 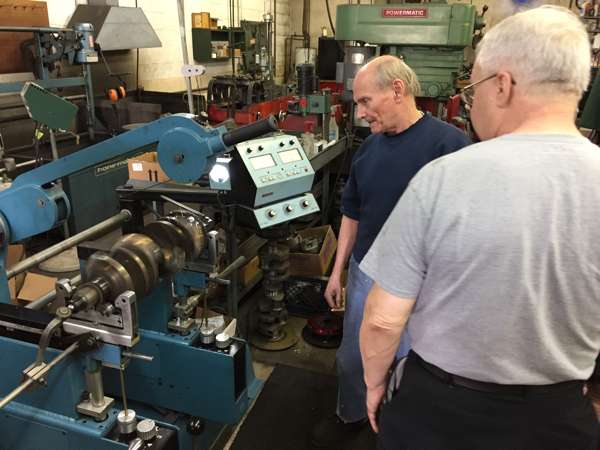 Ray and Phil discuss the delicate combination of art and science required for balancing a crankshaft for one of their diverse vintage engine projects.

Another helpful business trait that Victory Engines employs is that the shop will do work on any gas or alcohol engine that comes in the door. It doesn’t matter if it’s a motorcycle, marine, or performance engine, you name it, Ray and Phil will work on it. To top it off, Victory will also get work from smaller shops in the area without the capacity to do certain jobs.

“There are smaller shops around that don’t have a line hone or balancer and we will get work in from them,” Hartsel says. You’ve got to be friendly with all the other shops. They’re your competitor not your enemy. You have to work with them, not against them.”

“We try to be 100 percent honest and at the same time not worry about who we’re doing extra work for,” Banyas says. “Work is work. The competition is going to be there doing it no matter what, whether you like it or not, even if it’s a guy in his backyard taking work away from you because he’s doing the work for half of what you charge. You can’t fight that so why get upset about it? There are guys who worked for me who end up doing assembly work, but they can’t do any machine work and they still bring that stuff in here. I no longer get bent out of shape about that. I used to when I was younger though. But you can’t fight it.”

The strategy pays off. Victory gets work from dissatisfied customers coming from other shops in the area looking for better service and quality. 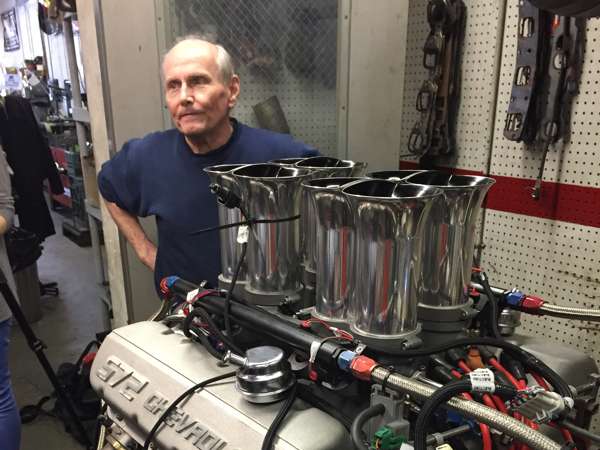 Phil Hartsel has been at Victory Engines since 1993. He is a jack of all trades in the shop. He’s seen here talking about the Hilborn EFI system on this 572 Chevrolet engine.

“Every spring we get an influx of people who are super disappointed in other shops,” Banyas says. “They’ve had their motor sitting in another shop all winter or a shop hasn’t gotten the job done and the customer missed all of last year because of it. We always tell them to bring their engines over here. I don’t think there has been a job that we can’t get done in a month for somebody. We can do jobs even quicker than that if necessary. We always strive to give customers good, timely service.”

Business comes into Victory Engines primarily through word of mouth. Ray has done some advertising over the years, but word of mouth is the strongest marketing avenue.

According to Ray and Phil, the bottom line for Victory Engines is that the shop always has work. “Basically, we are capable of doing everything but grinding a crank,” Hartsel says.

With a bunch of solid work in the pipeline and ideas on the horizon to keep the shop pushing forward, its no wonder that Victory Engines has had its share of wins, track records and good races over the years. While the type of work may have changed a bit, and the guys are getting a little older, the results have stayed consistent.

Diesel Transmissions – Geared Up to Handle the Power