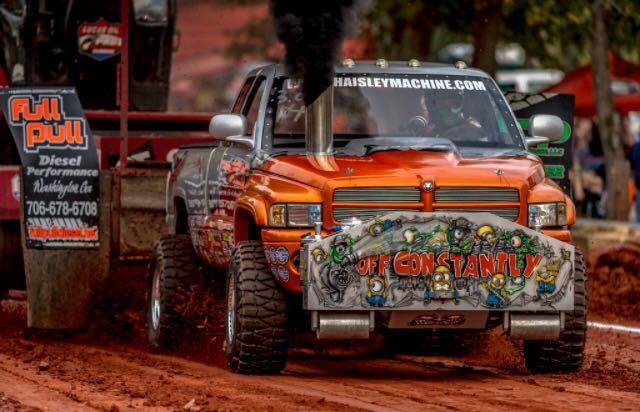 When Van and Patty Haisley started their diesel engine and machine shop in 1985, diesel engine work wasn’t quite like it is today. Haisley Machine was founded in Fairmount, IN at a time when diesel engines used to only be mechanical. Today, of course, diesel engines have added plug and play electronic devices for more power.

When Van and Patty Haisley started their diesel engine and machine shop in 1985, diesel engine work wasn’t quite like it is today. Haisley Machine was founded in Fairmount, IN at a time when diesel engines used to only be mechanical. Today, of course, diesel engines have added plug and play electronic devices for more power. 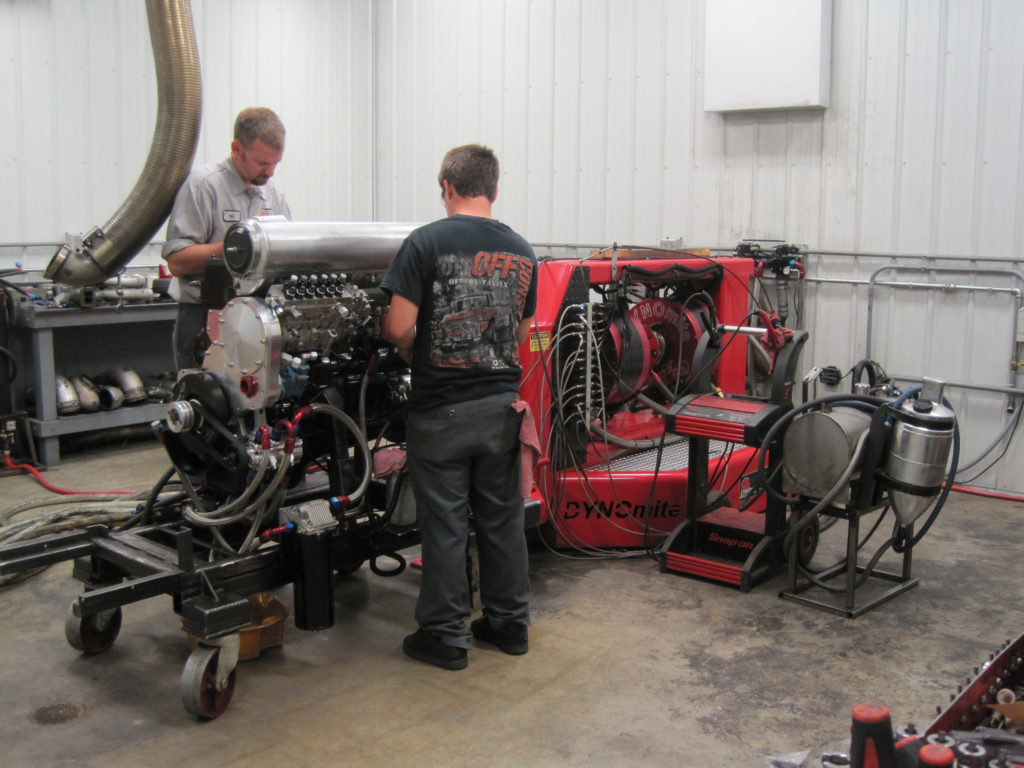 “The industry had already changed a lot, and then the common rail came out and added more computerized options and now the tuners are out – you have to stay up on the technical side of things to keep the public happy and to keep your shop modern,” says Patty, who owns the shop with her husband Van. “Still, we believe nothing can compete with the mechanical engines, and that’s what we build. If customers want something that is electronic, then we recommend them to other builders who have that expertise.”

Since opening more than 30 years ago, Haisley Machine has developed its diesel engine work, moved to strictly Cummins engines, and got involved in sled pulling. Van himself does sled pulling with a 6.2L diesel engine that he put in a ’75 Chevy truck.

“It wasn’t until about 2001 that we started getting a lot more full-blown engine work,” she says. “In the past five years the work has switched to all engine builds for competition vehicles – be it drag racing or sled pulling – and we are starting to get into the tractor market as well.”

Haisley Machine has also supported Diesel Motorsports on the truck side of things since its beginnings and sponsors the Thunder in Muncie event. Haisley also competes in Lucas Oil Pro Pulling and NTPA events.

“The best thing for us if we aren’t personally doing well in events, it’s even better when our customers are doing well and doing the winning because it shows that we are willing to give them anything we have or better for their stuff,” Patty says. “We offer customers several different options. If they want the best of the best and they’ve got the money for it, that’s fine. If they don’t, we have some other options.”

While Haisley Machine offers its customers several options when it comes to engine programs, Van and Patty don’t want to tarnish their reputation by lowering their high standards on the parts they use.

“We set a minimum for the quality of parts we are willing to put into a motor that we put our name on,” she says. “If they still can’t afford the minimum, then we try to talk them through some things or set them up where they can sit out for a year and save up some money to try and get to where they want to go.

“If a customer brings us something and tells us he wants 1,500 hp and he has stock pistons, I will tell him no. We aren’t going to build that because it is going to fail and there’s no sense throwing your money away.”

Van and Patty sell parts at their shop as well as different combinations of parts that they know are capable of certain horsepower ranges.

“Sometimes we will have customers come in with good quality parts such as a billet cam,” she says. “As long as it’s billet steel, we typically will use it. There are times that guys come in with an injection pump and if it meets our standards we will give it a try. If it doesn’t work, we can put one on that we sell. If the outcome is within 20 horsepower of what he was looking for, the customer might be satisfied or he might upgrade to ours.”

“We recently had a customer bring us some parts because he couldn’t afford the parts I gave him on an estimate,” Patty says. “He went internet shopping and brought in some [sub par] rods. When I give a customer a quote, it is usually fairly vague, and either it scares you or it doesn’t. In the end, it has every nut and bolt listed on it. However, you don’t get that when we are in the screening process. I’m not giving you a quote so you can go shopping.”

“If customers want us to install a part they bring us and it doesn’t work or it fails, that is additional labor to them,” she says. “Everything is extra. If they’ve got good parts, we don’t mind using them with the understanding that if those parts cause a failure or those parts fail, it’s on them. If customers bring something substandard, we will tell them, ‘No, we will not install it’ or ‘no, we will not build this.’ We have a minimum that we are willing to put our name on and reputation behind.

“If you were to install it and they get one hook and it tears up the valve train or whatever, you’re going to be the no-good SOB, and they’re going to be all over social media blabbing about how this Haisley engine only lasted one hook.”

To advertise its parts sales Haisley utilizes its website, benefits from word-of-mouth and does some contingency sponsorships with NTPA and Lucas Oil Pro Pulling.

“Word-of-mouth is the best though,” she says. “Competitors see our trucks out there pulling and performing and they have big stickers on them so the public knows it’s one of our engines.”

Haisley Machine not only takes its parts quality seriously, but the shop also wants its engine development to be in tip-top shape as well. With that goal in mind, Haisley recently purchased two new Rottler CNC machines.

“In 2009, we ran across the problem of Cummins blocks just splitting apart, especially at the Super Stock level where those trucks are all over 3,000 hp now,” Patty says. “The billet blocks are so expensive and take so long to get, so Van took a 6.7L Cummins block and put a deck plate on that and it took us about 2-3 years to get all the parts made for that engine. We call it the Haisley Machine Super B. Anybody over 1,000 hp we try to put them in that as long as their rules for their pulling organization can allow that deck-plated motor. We also have an option called the Baby B, which we do everything the same but we don’t put the deck plate on it.

The two big pieces of equipment are a Rottler F79, which is a four-axis CNC block and head machine, and a Rottler P69, which is a five-axis CNC head-porting machine. This will give Haisley increased consistency.

“Before these machines, we were having to ship blocks all over the state of Indiana,” Van says. “We also have some standard lathes and mills. We have a Rottler HP7A, which is a cylinder hone and a SG80M, which is a seat and guide machine.

We also have a Sunnen line hone, as well as a flywheel surfacer and a grinder. We have two spray jet cabinets and a 6,000 hp Land & Sea dual-brake dyno in the facility.” 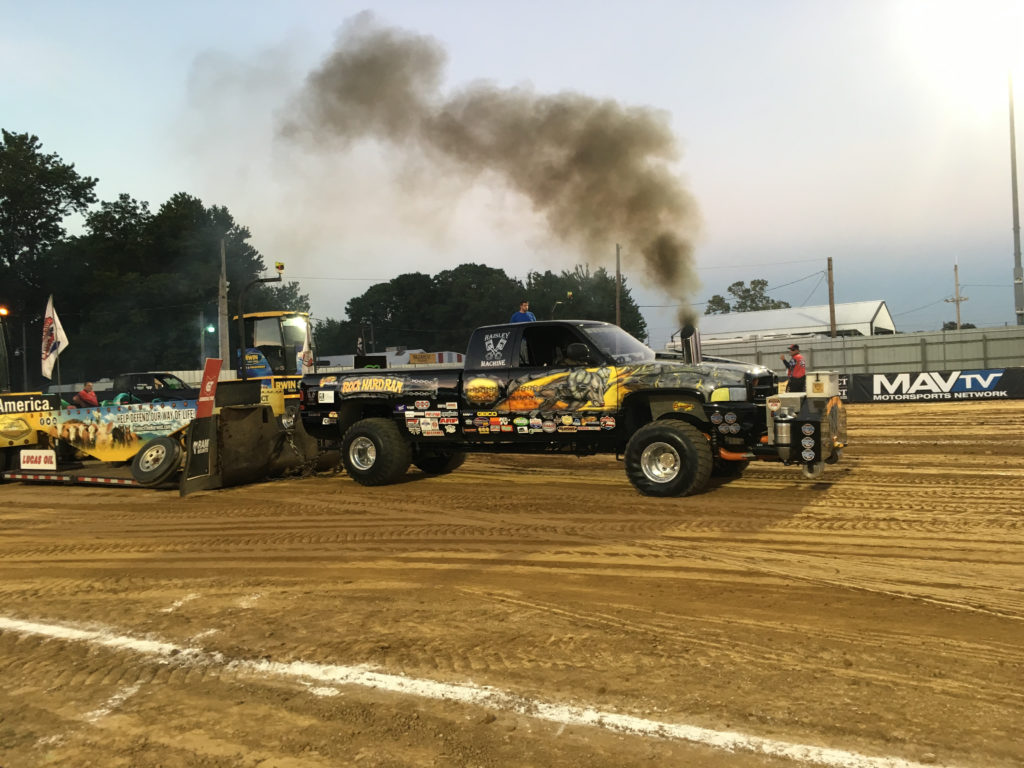 With the shop’s demand for high quality parts and engine work, it’s no surprise that Haisley Machine has plenty of happy customers winning competitions, and has seen business increase because of it. However, the Haisleys acknowledge that much of their business is dependent on the condition of the economy.

“Our diesel work probably had a peak around 2014-2015,” Patty says. “We have seen some decline as far as new engine builds and new technology, but people are asking for freshening up. On the agriculture side, guys are doing fine because they didn’t blow all the money they were making when corn was $8 a bushel – now it’s $3. That affects everybody because a lot of our really good customers are in agriculture.

“It’s affected new engines and parts, but it hasn’t affected rebuilding. Our pullers keeps us plenty busy,” she says.

“Nowadays with diesel, we have the respect just like any other engine builder and we are holding down a pretty good market share,” Van says. “The biggest thing about diesel engines right now are fuel systems and turbocharger technology. You can take a diesel engine and change cams, cam timing, compression ratios, this and that, and you might gain or lose 10 hp. The big leaps and bounds in diesel engine technology right now are in cylinder head flow, turbochargers, injectors and fuel injection pumps. You can change injectors on an engine and gain 150 hp. That’s where I see the core focus going in the near future. The big leaps and bounds are all going to be in fuel and air.”