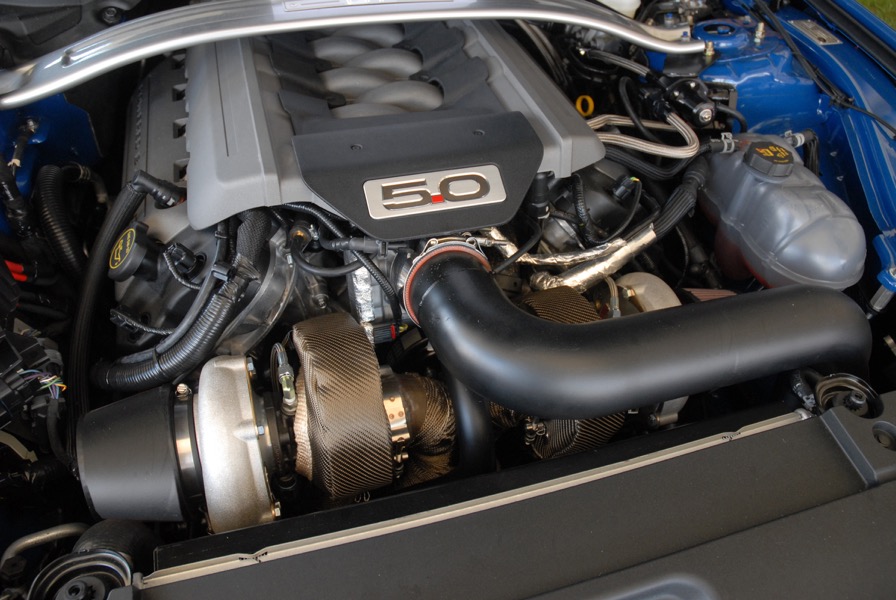 The MAHLE Mustang, the grand prize for the MAHLE Aftermarket “Drive With the Original” Promotion, is completed and ready for one lucky technician to win on October 31, at the 2017 Automotive Aftermarket Product Expo (AAPEX) in Las Vegas.

The initial step in the modification of the 2017 Mustang at Petty’s Garage in Randleman, NC, was the removal and disassembly of the 5.0-liter engine. All parts were inspected and the engine was reassembled with aftermarket parts specifically constructed to handle the increased power. This rebuilt engine has been dyno-tested in excess of 1,000 horsepower in full competition mode. 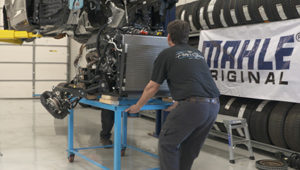 The Petty team built the twin-turbo power plant using the stock Ford Coyote engine block – but with a number of significant upgrades. 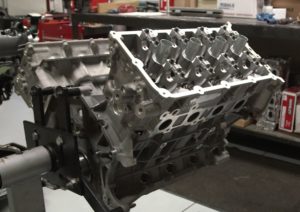 The MAHLE and Petty’s Garage teams paid attention to every detail. They ported and polished the cylinder head to improve airflow. And they used MAHLE Original air filters to ensure the engine gets plenty of clean air to breathe. The MAHLE Original oil filter offers the protection this engine will need, with bypass valves that help prevent engine oil starvation. 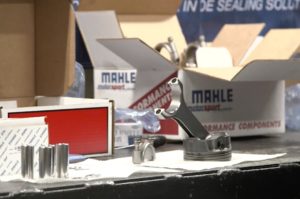 This motor is capable of producing in excess of 1,000 horsepower on the dyno. To generate the horsepower and withstand the cylinder pressures the twin turbos will generate, MAHLE Motorsports, Fletcher, NC, supplied special forged pistons using a 26-18 alloy to replace the cast versions that come in the stock engine. MAHLE modified the pistons for the exact needs of this incredibly powerful engine.

In addition to using MAHLE Original gaskets throughout, the MAHLE Mustang features other MAHLE Aftermarket parts including oil and air filters, thermal management components, and Clevite engine bearings. The high boost pressure from the twin turbocharger required MAHLE to forge custom pistons for the engine. 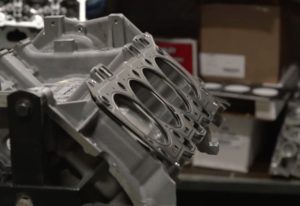 The MAHLE Performance Head Gasket that was chosen for this application, is one that was engineered to be able to withstand the heat and pressure generated by a motor with this much horsepower. The gasket is constructed of tempered, embossed 301 Stainless Steel for high heat resistance. This also lets it spring back to its original shape, which helps maintain the seal integrity when the head lifts. The gasket also features a multi-layer steel design that consists of 4 layers, compared to the original equipment’s 3 layers. The extra thickness helps adjust for the increased cylinder pressure and the boost, both of which can increase the head lifting. For superior micro-sealing in extreme temperatures, the gasket has a high-performance rubber coating. It’s also protected with a PTFE top coating for resistance to premature coating wear, and increased cold sealing.

The Petty team built the twin-turbo power plant for this beast using the stock Ford Coyote engine block – but with a number of significant upgrades. 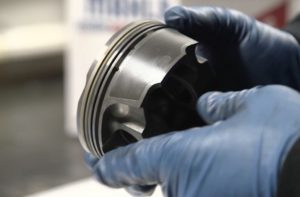 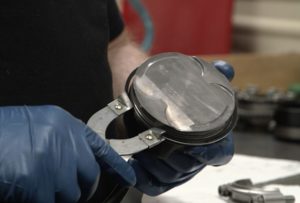 The crown of the pistons is thicker to handle the increased pressures. The surface of the pistons has three different coatings applied. First is an aluminum phosphate coating that’s on all surfaces of the piston. This is a dry lubricant that helps with lubrication of the pin bore. It also helps the break-in procedure. Then there’s a graphite coating on the skirts of the piston that is also an anti-friction lubricant. And last, but probably most important, is a hard anodizing on the ring groove. With this type of heat and pressure, it’s possible that the steel ring will start micro-welding to the first ring groove and this hard anodizing acts as an insulator to prevent this from happening.

“The MAHLE Ford Mustang is a real showcase for MAHLE Original gaskets and other MAHLE parts,” said Jon Douglas, General Manager, MAHLE Aftermarket North America. “It was a pleasure working with Petty’s Garage to pull this kind of power from an OE engine.” 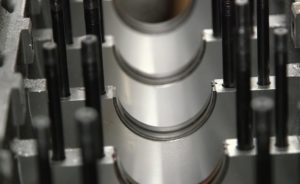 The “Drive with the Original” promotion runs to October 1, 2017. Four finalists will be randomly selected from all entries to receive an all-expense paid trip for two to AAPEX in Las Vegas. The “Original,” Richard Petty, will be present when the finalists select a key fob – one of which will start the grand prize MAHLE Ford Mustang from Petty’s Garage.

In addition to the grand prize, over 2,400 instant win prizes will be awarded, including Richard Petty Driving Experiences, autographed Richard Petty signature Charlie 1 Horse cowboy hats and autographed #43 die-cast model cars.Information on entering the “Drive With The Original” Promotion is available on specially marked MAHLE Original gasket boxes. Complete information about the “Drive with the Original” promotion, including official rules, terms and conditions, can be found at www.drivewiththeoriginal.com.

For more information about MAHLE Aftermarket and its brands, visit www.mahle-aftermarket.com or contact your local sales representative.