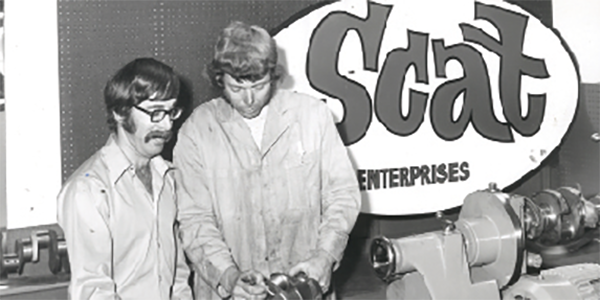 SCAT was born in 1962, created by Tom Lieb who ran an auto parts business out of his parents garage while still in college.

Tom’s first task was obtaining a business license, which required coming up with a name. He wanted something short and catchy but meaningful.

Tom’s grandmother and mother soon solved the problem.  When Tom and his siblings were underfoot as kids, grandma or mom would give chase, waving their arms or a broom, yelling, “scat, scat, scat!”

SCAT  is also a term for acceleration and speed, limitless in direction and creativity.  From that definition combined with Tom’s fond memory, SCAT was born.

Over 50 years later, SCAT’s crankshafts, connecting rods and engine components have been used in and have won every type of racing, from short track, Indianapolis, Daytona 500, and NASCAR,  to top fuel, funny car, drag, road and off-road racing.

SCAT products are used by GM, Ford, Chrysler, Nissan, Toyota and Honda. SCAT’s innovations have led to the V-4 engine or prototype crankshaft, connecting rods and crate engine programs, which serve as the model for high-end racing applications and production engines.

SCAT has won several prestigious SEMA awards, including a double win for in the Best Engineered New Product category. SCAT took home the first trophy for its Killer Engine, a horizontally opposed 4-cylinder air-cooled and water-cooled engine used in off-road racing, drag racing, USAC Midget racing and in-home built aircraft.  Approximately 9,000 of these engines have been manufactured since 1975.

SCAT took home its second award for the V-4 Engine, used in off-road racing, drag racing, USAC Midget racing and motorcycles.  From 1990-1998, 375 of these engines were built before the tooling and rights to the engine were sold to a major motorcycle manufacturer.  No other engine manufacturer or auto company has ever won this award for engine design, and SCAT proudly won the award twice. SCAT’s in-house manufacturing capacity is to design and manufacture an engine from raw material to finish assembled test engines.

SCAT is very proud of its ability to manufacture a raw billet to a finished crankshaft in its Redondo Beach, California, state-of-the-art manufacturing facility.  With SCAT’s broad range of products and the ability to produce custom crankshafts up to 43” in length x 10” in diameter, SCAT is truly your performance headquarters for crankshafts, connecting rods and rotating assemblies.