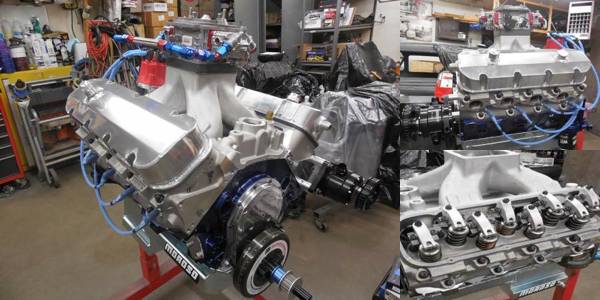 As a physicist and scientist in his former life, Gregg Hekimian is an engine builder who understands ways to improve upon an engine’s performance beyond what others may comprehend. With a background in the U.S. Navy under Ronald Reagan, Hekimian was licensed to work with military coatings.

Having been long done with that aspect of his life, he is still licensed to work with military coatings today, which he calls Mil-Coats. He also has the only vacuum-insulated cryogenics in the country at his Watertown, MA engine shop called Hekimian Racing Engines, which he opened in 1987.

In fact, some of the stuff Hekimian researches for engine development is so top secret he has a separate lab in Burlington, MA that the public is not allowed to visit.

“I have a small shop that’s kind of my overflow shop,” Hekimian says. “The other shop I have is a laboratory. That’s where we do the vacuum-insulated cryogenics and we do the military coatings. It’s not open to the public.”

While Hekimian’s secret lab is off limits to customers, his other shop in Watertown will welcome them openly. Many people come to Hekimian from around the country because of his cryogenic engine treatments and Mil-Coats.

“Cryogenics can actually slow down breakage and slows down any voids,” he says.

“And the commercial coatings you see with engines are good, and better than nothing, but what I have tops them.” 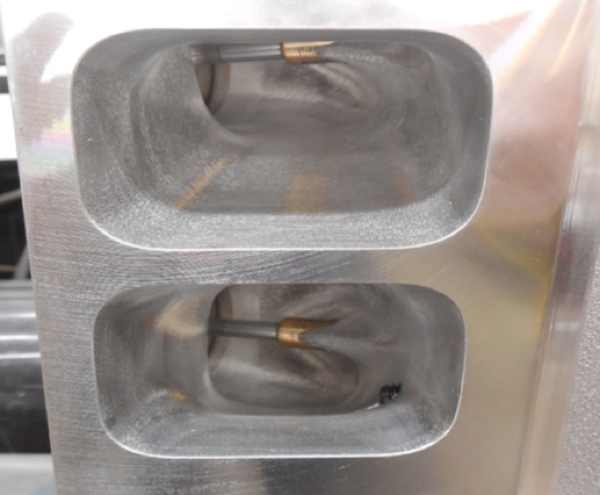 One such engine getting all these high-tech, super secret treatments is a 632 Big Block Chevy that Hekimian is building for the sportsman drag racer. Hekimian says this build is a budget engine for guys running in the sportsman class looking to get mid-7s to high-8s. The engine will make a minimum of 1,000hp on race gas and has all-day reliability.

“I start with a World Merlin 3 block,” he says. “They’ve got a high density 40,000 PSI casting, which I check quite a bit. I do durometer readings. I do Rockwell testing. It’s heavy, but it’s a really, really nice block.”

To hone the block, Hekimian says there are several ways he can do it, but for this particular engine block he used diamond hones.

“There’s different cross hatches, depths, peaks and valleys that I use for certain rings,” he says.

As mentioned, this whole 632 engine has been cryogenically treated. It’s going to also get some Mil-Coats.

“With the cryogenics and this particular motor, when we do the diamond hones it’s not your standard hone,” Hekimian says. “It’s completely different with cryogenics. My leak downs are near zero – hot or cold, you name it – I know where my rings go.”

Beyond the advantages of cryogenics and Mil-Coats, this 632 is running Brodix cylinder heads and solid roller cams from Erson.

“The cams are solid rollers and made to my specs,” he says. “The cam is from Erson and they make them for me. The core of the Erson cam is actually made by Callies and they do the induction hardening on the core. The induction hardening has .150” toughness on the surface, which means it’s a little more stiff.”

Hekimian reminds us that this engine is for a sportsman racer on a budget, so the cams aren’t large diameters and he doesn’t get into the journals, but it will flex a whole lot less. “Plus my cryogenics is going to flex even less than that,” he says. “It’s like buying a really fancy cam with extra material but its still lightweight.”

“Richard Iskenderian is a good buddy of mine,” he says. “They’ve come a long way with this patent and this design. I can put 1,500 lbs. of spring pressure on them all day long and these things just will not waver, especially after I cryo treat them.”

For pistons on this build, Hekimian only uses custom-made stuff, and chose to use Gibtec. He also considers JE at times, and only uses billet or forged or something comparable depending on what’s available.

The rods are from Scat, and again, those get the cryogenics treatment to enhance that fine line where it falls off in horsepower and where it fails in order to go beyond that.

The crank is also from Scat through Liberty Engine Parts. The head gaskets are from Cometic, which he says is his number one choice whenever possible. The intake manifold is a Profiler Sniper 2 and Moroso is a favorite for oil pans.

Hekimian also uses a 1450 cfm carburetor that’s either a Holley Gen III or a Quick Fuel. “They’ll do them up for me the way I want, and when I get them I have to tweak them,” he says. “I work the metering plates a little more than the average guy.”

Hekimian also has his own ignitions for this build, and the distributor is billet.

“I run 145 millijoules on the box,” he says. “It’s equivalent to a six box, and we can run a seven. Either one depends on what the customer wants to run with the matching coil that disperses a lot of heat. I run all my own electronics, and even those are cryogenically treated. The signals are extremely quick. Voltages are fast and high, and resistance is very low.” 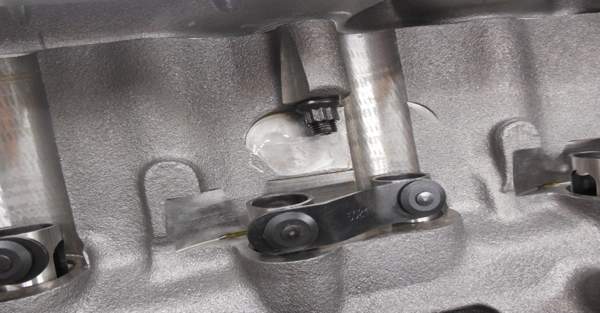 While Hekimian notes that the 632 Chevy is a basic build is some ways, it’s tweaked with his machining, his tolerances, his coatings, and his cryogenics.

“If everything goes right, this engine takes about a month to build because it takes time to get some stuff made,” Hekimian says. “On parts like the heads, I don’t use everything Brodix has. I use our own stuff such as my own valves. I will use Pac springs, which is one of the best I’ve seen. And again, with my cryogenics it lasts longer than anything out there.” 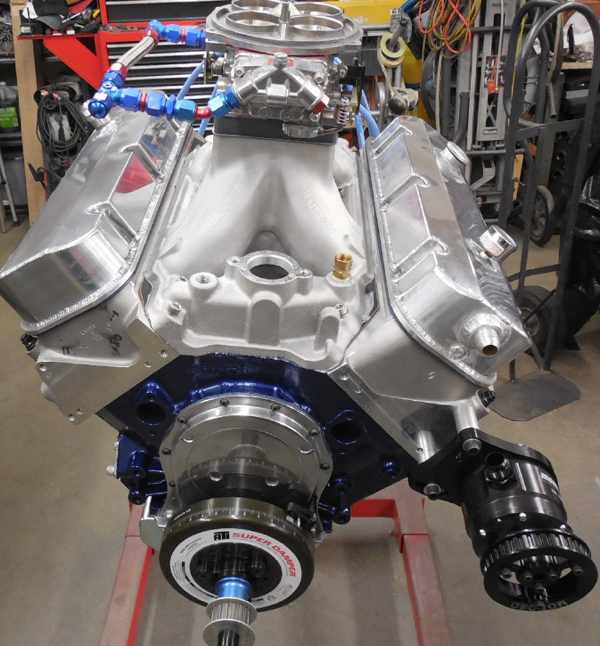 “I run top gapless,” he says. “Without my cryogenics, the top gapless will not work with my diamond cuts. With the cryogenics they will work. Everything is specific. If someone is reading this and saying, ‘Maybe I gotta try this.’ You’ve got to do it with my stuff – with my cryogenics and coatings. Otherwise it will not work.” 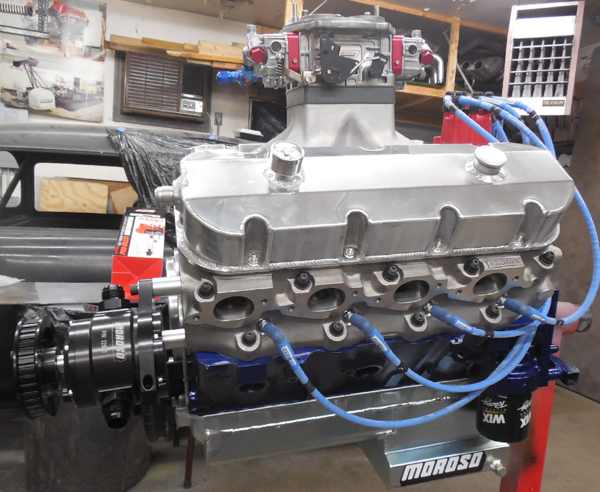 “If you had two identical engines – one with coating and one without it – the camshaft has to change because it has pulse signals/wave signals going out through your exhaust system that it causes the retained heat to blow out rather than soak into the block, pistons, rods, heads, and valves,” he says. “We’re actually excavating that faster. There’s a rate of pulse according to the laws of physics and I calculate rates of pulse. I do experiments with it. When we do that we see a result that gets calculated into whether I open the intake valve longer or shorter. That actually brings in the extra air charge free from that pulse. So there are two different types of cams to use with the cryogenic and coated engine. A lot of guys don’t see that and sometimes they have signal problems with their tune-ups on their carbs. They can’t get this tuning right.” 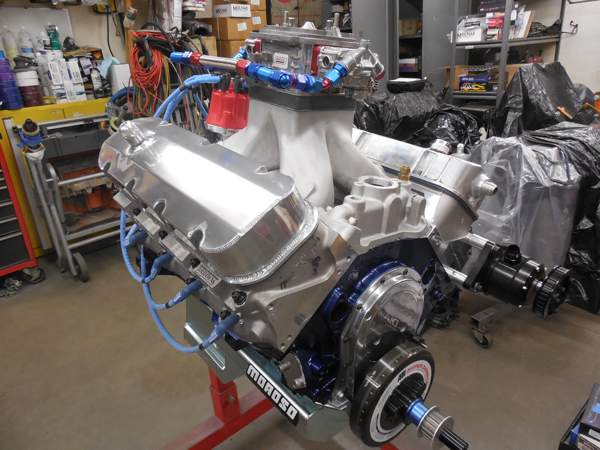 The other thing Hekimian does with the cams is swap the firing orders – twice. He swaps the 7:4 and the 3:2.

“The reason is that the 7:4 wave signal inside the plenum of the intake can actually steal each other’s fuel and actually cause a signal differential in the seven and four cylinder,” he says. “On the 3:2 swap, the crankshaft counter-weight actually wants to stop for like a tenth of a second. We release that and the torque loads change.” 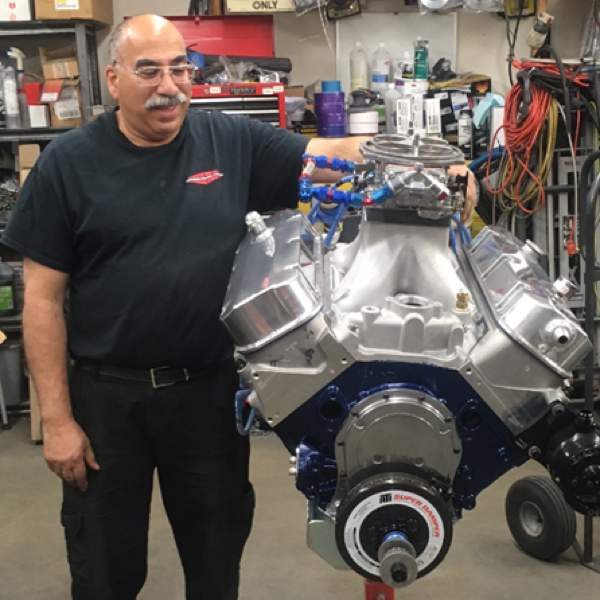 “And that’s without the secrets I’m not telling you,” he says.