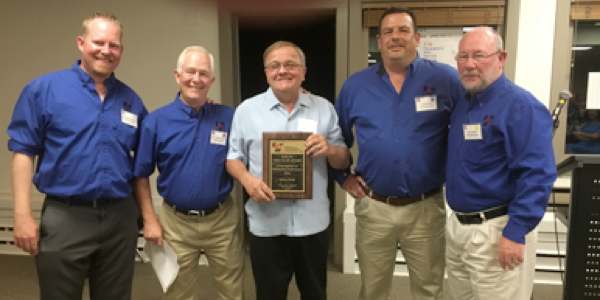 Engine & Performance Warehouse Inc. (EPWI) has named its 2016 “Vendor Of The Year” and “Representative Of The Year” at the Awards Dinner during EPWI’s annual summer conference in Vail, Colorado on Thursday, August 10th, 2017.

Engine & Performance Warehouse named Redhorse Performance as the EPWI 2016 Vendor of the Year.

President Benjamin Johnson, and Dir. of Marketing Amanda Ognar were present to accept the award for Redhorse. Paul Van Woensel president of EPWI said, “Redhorse has quality products, superior performance/value and commitment to a true partnership with distribution have allowed this line to grow exponentially and to become a very important and significant category for EPWI.”

Danny Molde, a 44 year veteran of this industry is now the Business Development Manager for Federal Mogul Motorparts and was present to accept the award. This is Danny’s second time to win this award and only the second person to ever win it twice. The Rep of the Year is selected annually, on a rotating basis by region, using combined votes based on performance scores during the prior year in three categories: sales support, distribution philosophies, and timely and accurate follow-through.

Jamond Haug of Homewrecker Motorsports might have had one of our favorite cars of the weekend when we attended the 2022 Builder’s Brawl. He showed up ready to rock with a gorgeous, white, z28 Camaro and a 526 cubic inch supercharged Hemi under the hood. It’s our Engine of the Week! Related Articles – Twin-Turbo