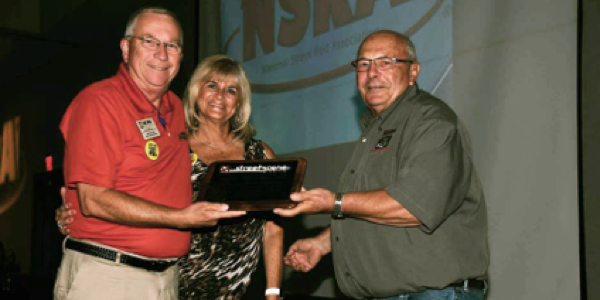 Thanks to his dedication and passion, Joe Petlick has spent a lifetime involved in the Street Rod community. Not only is Joe a fellow enthusiast and owner of several hot rods including a red 1939 Ford Coupe, but his occupation as sales manager at Motor State Distributing has allowed the Southwest Michigan native to champion many of the causes that keep the hobby and the industry a vital part of Americana. Joe also serves on the SEMA Hot Rod Industry Alliance (HRIA) Select Committee and is chair of education.

The National Street Rod Association presented Joe with the 2017 NSRA Person of the Year Award during the recent 48th Annual Street Rod Nationals in Louisville, Kentucky. As mentioned, Joe is dedicated to the Hot Rod community even if it means not spending time year after year with his wife on their anniversary, which coincides with the National event each year.

This year was the couple’s 42nd anniversary and his wife surprised him by appearing on stage just as Joe was telling the audience about how wonderful and understanding she was. After regrouping from the surprise, Joe told the room full of street rodders how humbled and honored he was to be selected NSRA Person of the Year.