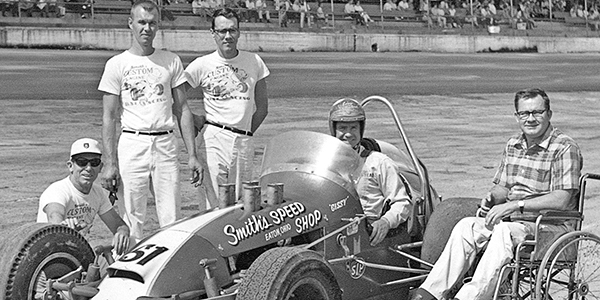 What do you almost immediately think of when the town of Dayton, OH is mentioned? Hey, that’s easy! It would have to be aviation and the home of the Wright Brothers Lifting that spindly flying machine into the air WAS certainly an accomplishment of huge proportions.

What do you almost immediately think of when the town of Dayton, OH is mentioned?

Hey, that’s easy! It would have to be aviation and the home of the Wright Brothers Lifting that spindly flying machine into the air WAS certainly an accomplishment of huge proportions.

But there is another characteristic of this Midwest city that might be equally important: That would be the huge influence that Dayton has contributed to the design and development of the American automobile.

A direct relationship between the aviation and automotive industries can be seen through racing, and believe it or not, Dayton is one of the nation’s bigtime race towns stretching back many decades. In fact, Dayton-area racing events took place in the 1800s, 1900s and 2000s! There’s a wide variation of racing activities that have been a part of the Dayton scene.

Of course, other race cities offer competition to Dayton as well. One of the most obvious is Los Angeles and its aircraft industry which meshed with racing, including Kurtis Midgets, sprinters and roadsters, and series racing-related companies like Watson roadsters, Gilmore, Carroll Shelby operations and others. And there were also a number of dry lakes, which allowed unlimited testing.

But Dayton always seemed to have one up on the West Coast. First of all, Dayton was a machine tool and tool-and-die city of the first order. Then, the industrial base was second to none with numerous General Motors production facilities. Then, there were also Delco Products, Mead Corporation, NCR, Chrysler, Wilber Wright Field, Wright Patterson AFB and others. Lots of smart people, whose brains frequently looked the direction of racing.

It’s really not surprising that Dayton acquired the nickname of “Little Detroit” through the years.

One of  Dayton’s first recognized manufacturing relationships with the powered racing community occurred in 1903 when Edward Euchenhofer was actively involved in perfecting his short-lived Victor passenger car. The model was advertised as being very durable and the car builder decided that participating in a race might just verify that attribute.

It occurred in an early race at the Montgomery County Fairgrounds for gasoline-powered vehicles of a 1,000 lbs. or more. It was a three-mile event – unfortunately, the Victor was not quite up to the task.

During the 1900s, a young engineer – one of a number of skilled technicians in the area – named Charles Kettering came on the Dayton scene. A genius in the art of automotive technology, Kettering, while working for Delco Labs, designed an electric starter and ignition system. That was followed by patents for an early spark plug and an automatic transmission. He was also involved with the development of unleaded fuel.

The fuel accomplishment would lead to solving the engine knock problems, along with providing increases in performance and compression ratios.  The advance in technology was just the right ticket for the high-revving V8 automotive engines following World War II. One can certainly imagine that the Olds Rocket 88 engine was one of those engines, a powerplant that pushed race cars to the front in the early days of NASCAR racing.

Another case of racing in Dayton took place in 1924 when the National Air Races came to Wilbur Wright Field. It was racing of a different type, one being contested  through the Dayton skies. However, it was part of a number of racing surfaces Dayton hosted. Besides the wild blue yonder, the city hosted competitions on water, and even ice, along with racing on both pavement and dirt surfaces. Then, there were some Daytonian racers that ran off-road trucks in Baja races.

Some of the racing was done against the clock in a straight line in land speed racing on pavement inside a closed airport at nearby Wilmington, and on the smooth salt of Bonneville. Then, in an entirely different realm, there was national pulling where success was measured by how far a huge weight could be pulled down a straight dirt track.

Even the Huffy Manufacturing Corporation in Dayton helped in Dayton’s performance image by building speedy race bicycles in addition to the standard customer machines. Those bicycles showed strong in the 1984 and 1988 Olympics with two gold, two silver and one bronze metal. The company also created carbon fiber for use in road race and TT bikes.

It is amazing the number of Dayton racing drivers, car builders, owners, and sponsors that have reached the ultimate apex of national racing. It is demonstrated by Indy 500 winners, NHRA US National champions, ARCA Stock Car champions, USAC Sprint Car champions, and on and on. It seems that having that the Dayton connection points to success in racing.

But with all those parts and pieces for supporting racing, there was one other type of organization to provide the powerplant for the particular racing machine. Since this article is appearing in this magazine, you could assume that this organization would be the engine builder community, and you would be correct.

In accomplishing the writing of a recent book titled Dayton, Ohio – Race Town, research revealed that there were some 50 engine builders in the Dayton area. Of course, that impressive number includes some who were in the early years of the 21st century, most of which are now gone. But their accomplishments are not forgotten.

This organization was formed in 1978 and is recognized as one of the performance arms of Chrysler. One of the connections occurred through Jack McCormick Motorsports.  The Kammer operation is well qualified for testing activities with a pair of engine dynos along with a chassis dyno. K&K built 10 of these drag machines and established a number of national records in the Stock Eliminator Class.

In more recent years, Kammer and Kammer was behind three Mopar pick-up trucks to also run in the Stock Eliminator Class. They raced a 1992 Ram and two Dakota models. The trucks used small blocks with fuel injection and throttle body MPI induction systems.

During the early 2000s, Mopar corporate requested that the Bob Kammer-led group upgrade some new engines to test new prototype transmissions. “We installed Viper rods, Sealed Power pistons, 360 cams, along with blueprinting and balancing the engines. We then dynoed the engines assuring that all had the same performance,” Kammer explained.

Ault and James – Interfacing with The Big Three

This highly-respected engine builder has had several interfaces with some motorsports companies. “Crane Cams asked us to do some cam testing for them and we had the specific equipment to do the job. We then also tested them on our own drag cars… Then we also worked with Oldsmobile and built them an advanced cast iron block, which was used by AJ Foyt,” top guy Jerry Ault explained. “Then there was this other time when Mopar asked us to come up with an advanced engine with two cranks and an aluminum block, but there were no valves or cams. It was all electric!”

George, of course, carried his engine building prowess much further, being the driver of his creations along with a solid connection with Ford. His relationship started in 1966 when he used the Ford Cammer engine in his highly successful ‘33 Willys Gasser. Ford was happy with that success, but it wanted George to be driving something that carried a Ford body.

What the company wanted was use of a Mustang, and what evolved was a ‘67 2+2 Fastback model. With George at the wheel and keeping its engine purring to perfection, it ran like a rocket with the competition claiming it had an unfair advantage.

But time didn’t stand still, and with the 1969 model year coming on, there was a new body style (the Mach one) and a new powerplant, the super-powerful Boss 429. Ford wanted both of those aspects to be a part of the new Gasser.

It didn’t take long for George to determine that in its stock configuration, the 429 was not an engine that was compatible with professional drag racing. It took George’s engine building skills to actually recreate the engine to quite a different powerplant with a twin-turbo design. Like the first Mustang, it too had an unfair advantage.

Bobby explained, “This was a slightly different situation, it had to do with the placement of the engine in an ARCA racecar and I worked with Oldsmobile. The set-up it came up with was used only on the Delta 88 during the 1987 season. They let me do the testing on the arrangement at Talladega where it ran 198.5 mph during qualifications and about 205 mph in the race.

Right off the bat, it’s interesting to look at the applications that these engine builders concentrate on. It is interesting that a small percentage of the builders just work on one type of engine. But those that do seem to migrate to drag engines.

The next category seems to be those that work on both drag and stock car engines.

A good example of that category is Performance Clinic. Interestingly, a number of the builders agreed that the oval track was harder on the engines than drag racing.

Another interesting category is the one brand engine builders. The aforementioned Kammer and Kammer operation is very heavily tied to Mopar, but for Tony DePillo, that Mopar concentration is pretty-much 100 percent.

Then, there was Ray Smith of Eaton, OH, who had engine building activities with midgets, sprints, and champ cars. It is interesting to note that most engine builders who delved into oval track racing (stock cars or open wheelcars) addressed either one or the other, but not both.

Then, there are guys like George Montgomery, who for many years took on just about every challenge. He tried pulling, sprint cars, drag cars, road racing, land-speed racing, and on and on. His business is the longest-continually operating speed shot in the nation.

A Gathering of the Engine Guys

Getting all these skilled guys together was a real treat. The skills all these guys had was amazing. And hey, even though they were competitors, they said that they all liked one-another. And they also carried out business with each other.

Sitting listening to them bench race was fascinating, because every one of them had amazing stories about being on the ground floor of the history of racing.

But for all the similarities of their experierences, there was one difference from an equipment point-of-view. Some indicated that they were staying up with the growing technology of tools, while others said they were still “old school” using vintage machine tools, some in the 50-60 year old range.

One point of agreement among them concerned the weak link in modern race engines. They indicated that would be the valve train, with mostly cranks and rods being cause. There was also a group emphasis on ensuring you build the best engine you can, every time!

Did we miss any of the legends? Email us and tell us who else was instrumental in building Dayton’s engine history.

Mike Rowe, Tanner Foust to Keynote SEMA360
Connect with us