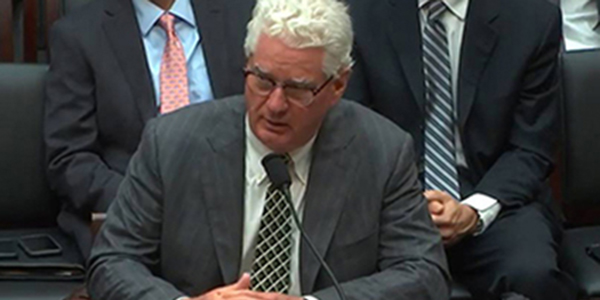 Page testified on behalf of H.R. 350, the “Recognizing the Protection of Motorsports Act of 2017” (RPM Act), which clarifies that under the Clean Air Act, it has always been legal to modify a street vehicle into a race car used exclusively at the track.

In his testimony, Page emphasized that these vehicles that may have once been street legal, now are towed around on trailers and only driven at the raceway facility.

“The EPA now defines a majority of our customers as law-breakers,” Page said. “Given the agency’s policy, a clarification to the law is absolutely needed. The RPM Act simply makes clear that converting a motor vehicle into a dedicated race vehicle does not violate the law. Further, it restores the original intent of the Clean Air Act that the law applies to motor vehicles used on our roads and highways and not to race vehicles.”

Page also cited an analysis conducted by the Sonoma County Economic Development Board that measured the regional economic impact of a single vintage race weekend at their facility to be nearly $2 million. He added that this activity takes place at Sonoma Raceway, and at hundreds of other tracks across the country, on a regular basis. The industry as a whole employs thousands nationwide and contributes billions to the nation’s economy each year.

Countering opposition claims that the bill creates a loop hole, Page noted that the bill does not reduce EPA’s authority to enforce against illegal parts on street vehicles.

In Page’s home state of California, which owns the strictest emissions laws in the country, state law and regulations specifically allow for motor vehicles to be modified for use exclusively in motorsports competition.