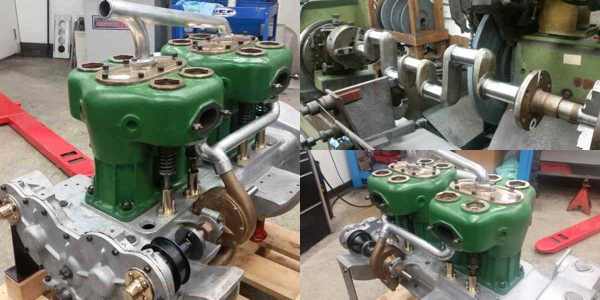 As many of our readers have become accustomed, it’s been harder and harder to be a specialty engine shop these days with a singular focus. The folks at UCF Machine Shop in Carlisle, PA can certainly attest to that.

Although UCF specializes in diesel engine work, the shop will tackle pretty much anything that comes in the door, according to Mike McCommons, the shop manager.

“The only thing the shop can’t do is grind camshafts,” McCommons says. “Everything else is done in-house. We do pretty much anything that comes in the door. We’ve done a lot of 6.0L Ford diesel heads. We will tackle some motorcycle work. We’ve also done a fair share of big block Chrysler work, Ford Modular work and big block Ford stuff in excess of 600 cu. in. on the gas side. Recently, we’ve done work on a 446 International gas engine, a 534 Ford, a 401 Ford tractor engine, and just a little bit of everything.”

The shop has been under its current ownership for around 33 years. When you’ve been around for that span of time, you tend to become a jack-of-all-trades. One such example is a 1914 Stutz Bearcat engine that came in the door recently.

“The gentleman that brought it in was originally from around here and had heard of us before,” McCommons says. “We had done a 1913 Fiat engine probably 15 years ago and the customer knew of us doing that engine, which was an awful lot like this Stutz. It’s just an antique-style engine with poured bearings and everything.”

The customer called one day asking if UCF was interested in the job, and it wasn’t long before the engine, also known as a T-head, showed up at the shop as the customer was heading to Hershey, PA for the Hershey Show.

“It was already torn apart,” McCommons says. “I think he had found it in a sawmill or something. They used to take these engines out of the cars to run sawmills back in the day. It was basically in pieces and baskets and boxes. Every connecting rod was bent. The pistons and valves were worn out. Everything was just worn out on it.”

According to McCommons, the engine had spun a rod at some point in its life and someone used a big hunk of leather to put in the rod to keep it going for as long as they could.

“The Babbitt was all beat out, and because the rods aren’t an available piece and they were bent, we had a set of billet rods made and pistons made,” he says. “We did have The Babbitt Pot up in New York, pour the rods for us and he actually had main bearing shells in stock for it that we got from him and then line bored to get the crank to fit.”

The rods may have been in the worst shape, but everything on this engine needed some serious attention. UCF started by getting everything cleaned and magged before they noticed that one of the jugs was cracked.

“The one jug was cracked, so we used lock and stitch pins along with welding to repair it because there were parts of it that were so thin that it just couldn’t be pinned,” he says. 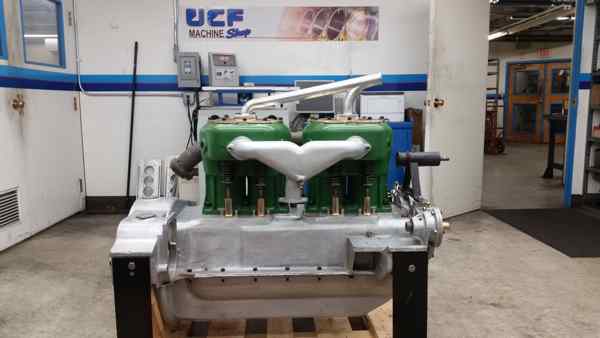 UCF also pressure tested both jugs and bored the cylinders out. The shop had Victory 1 Performance make a set of valves for the engine with 3/8˝ stems, springs, retainers and locks. UCF put the guides in and a shop called Camcraft reground the cam.

“The engine has solid roller lifters in it and the brass bodies that bolt into the side of the block that the lifters run in were worn out and they had made us new ones of those.” 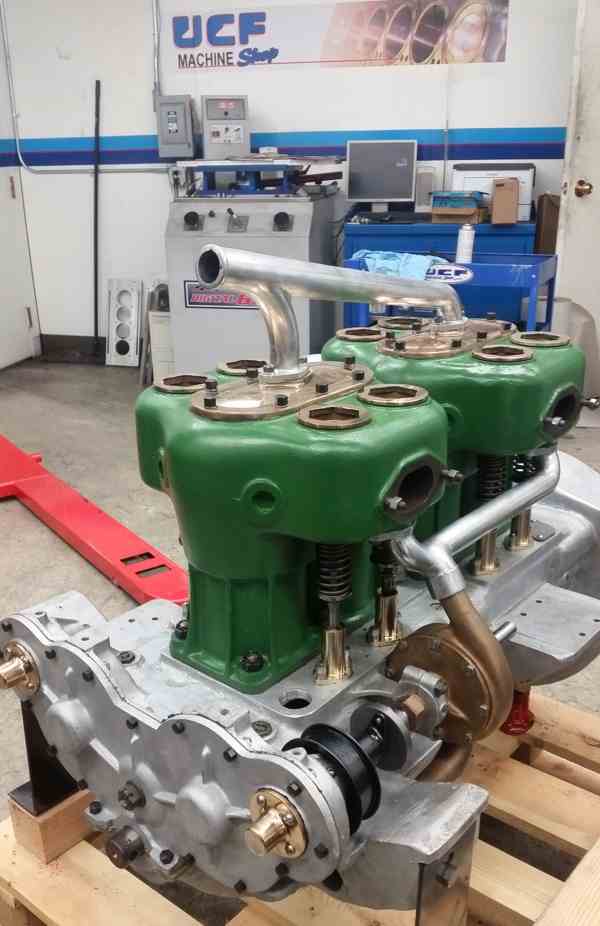 In-house UCF did plenty of work as well. McCommons and his team line bored the engine and the bearings, balanced the engine, did the valve job, and resurfaced the bottom and tops of the jugs for the water manifold plates that bolt on top of the jugs.

“We resurfaced all that and repaired any bolt holes that were eroded away and gone,” he says. “We also polished up a bunch of the brass parts. We had the rings converted to gapless, which came from Total Seal. We rebuilt the oil pump, and we reground the crank.”

The shop even went as far as making all the gaskets themselves to fit this antique engine.

“Gasket City supplied us with the sheet material and then we just traced them and cut them out and punched holes in them from there,” McCommons says. “We also had to add oil lines because these engines have one oil galley but the pump bolts onto the side of the pan externally.” 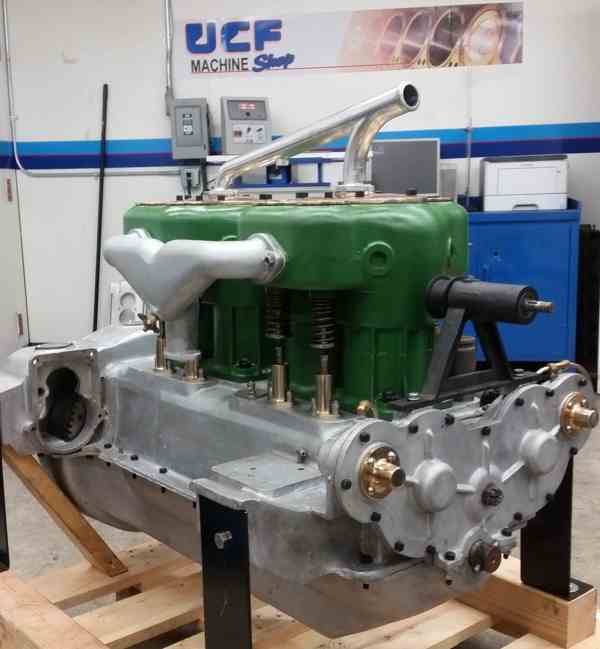 After what came into the shop as bits and pieces in boxes and baskets, left UCF as a new-looking, 103-year-old engine ready to relive its glory days.

This Stutz engine is a 390 cu. in. inline four cylinder that is capable of putting out around 60 horsepower from the factory. Once the car it will be mounted in is fully restored, this engine will be ready to roar.