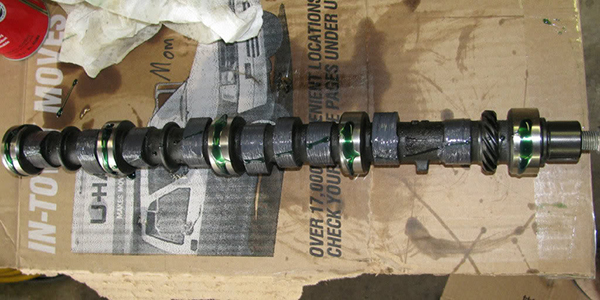 T
his month let’s cover two different lube topics. I think we can help everyone better appreciate what goes into both of these lubes and how important they are to the success of your engine building operations.

For years, engines were assembled using thick motor oil and whatever lube the camshaft provider put in the box with the camshaft.  If you were very careful breaking in new flat-tappet cams (lighter valve springs/30 minutes of 2500 RPM operation), you never experienced a cam lobe failure. But a lot of racers and camshaft manufacturers out there had problems.

There are at least two distinct parameters to address when using flat tappet cams. First, one needs an extra slug of zincdithiophosphate (ZDP or ZDDP) in the assembly lube to form a sacrificial film between lifters sliding on the cam lobes. Second, this lubricant needs to stay on the cam lobe in order to do its job correctly.

From a lubrication engineer’s point of view, grease is the perfect solution. Think of grease as oil held in suspension by a complex soap substrate until it is needed. When temperatures go up, the grease melts, and the oil flows to the component needing lubrication exactly when it is required.

For my personal use, I formulated a grease containing additional ZDP. This grease stayed on the cam lobes even after considerably long periods of storage. I used this grease for years on my own engine builds without a single failure.

A premier NASCAR team I worked with relayed that they drilled holes and installed carb jets to squirt oil from the galley onto all the cam lobes constantly. They still had lobe failures. The problem with that method, if you think about it, was that half of the lobes were oiled immediately prior to lifter contact while the other half were lubed after lifter contact on the back side of the cam lobe. They were pleasantly surprised when they tested grease on their cams, and their problems were solved.

I’ve learned over the years to use an oil-soluble grease on flat-tappet cams and pushrod tips. Heavy (SAE 30 grade) oil is used on bearings, crank, rings, etc., to reduce initial cranking effort. Roller cams don’t need the grease due to lack of sliding contact, but pushrod tips still do. Greases are also useful for lubricating other areas of sliding contact in the engine. A dab of grease on gear drive cam gears, oil pump gears and distributor drive gears can assist break-in until the engine oil flows freely.

Also use a break-in oil since they are formulated without moly disulfide, which often interferes with dispersants in the oil. Diesel engine oils are problematic since they usually contain a high level of dispersants and detergents. If you find a sulfonate-containing grease, you will have a grease, which reacts quickly with the oil and provides limited rust protection.

Never use a grease which isn’t oil soluble. I showed one NASCAR team that the white grease they were using didn’t dissolve in the oil, and the white grease particles actually plugged their Oberg filters prematurely, interfering with engine oil pressure. An oil-soluble grease quickly solved their oil pressure problems.

Practically any oil can be used to lubricate bolt threads when assembling an engine. However, torquing these bolts becomes problematic due to the physics of friction.

Remember when fuelers used to smoke their tires all the way down the quarter mile? When they finally learned to keep those slicks glued to the track, speeds went up and ETs went down. Now look what happens when a fueler “goes up in smoke.”

One can easily demonstrate the difference between static and dynamic friction. Take a heavy block and pull it across your work bench with a spring scale. Note the force required to initiate movement of the block.  Then notice how much less force it takes to keep the block in motion. Put a little oil under the block and repeat the experiment. Note how much closer these values are.

The same principle applies when torquing a bolt. If you are trying to increase the torque on a bolt slightly, you may find you’ve overshot the mark because of the torque required to break that bolt loose. Proper lubrication is used to minimize differences between static and dynamic friction on bolt threads, and it is critical.

Most bolt manufacturers tell you what lube they want you to use when torquing their bolts. This is usually the result of considerable R&D on their part. They aren’t trying to sell you a product; they’re trying to ensure that their bolts never come loose in operation.

Rod bolts are the most critical. Just think of the forces acting on a rod bolt as it is alternately stretched and compressed several times a second. I think rod bolts and valve springs are some of the most stressed parts in any engine today. The forces acting on them are enormous!

So what have we learned in the last few years? First, bolt torque readings aren’t very repeatable. If a bolt thread lube containing moly disulfide (MSO2) was utilized on aluminum rods the moly would polish thread surfaces. Consequent torque readings would be too high due to the polished threads polishing reducing frictional drag. Steel rods are not as sensitive.

Consequently, most engine builders now utilize rod bolt stretch as their primary tightening parameter. Each bolt manufacturer knows exactly how much his bolts should be stretched to maintain optimum champing force.

The correct way to torque using rod bolt stretch is to lubricate the bolt threads (don’t forget to put some lubricant under the head of the bolt), then tighten the bolt until the recommended amount of stretch is obtained. Note the torque wrench reading. Back the bolt off; relubricate everything; then tighten to that torque reading. Repeat this procedure for each individual bolt as all bolts are not exactly the same. You will observe differences.

Most of us torque the various bolts in an engine when it is being built, and we don’t worry about those bolts again unless we have a failure. High maintenance engines, such as fuelers, retorque many bolts after every run. I think fuelers should do the initial torquing and all subsequent torquing in the pits using the same lubricant on the threads to optimize repeatability. I would utilize the same torque wrench, or at the very least, torque wrenches which have been frequently calibrated against each other.

Improved bolt torquing can eliminate “windowed” blocks and head gasket failures. We don’t need failures if we intend to win.