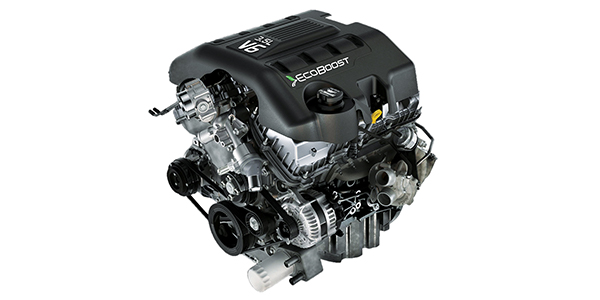 In 2009, a 3.5 liter twin turbocharged V6 engine was offered as an option in the Ford F-150. It was badged with the name EcoBoost and has since been a strong competitor in terms of torque and horsepower for a full sized truck. 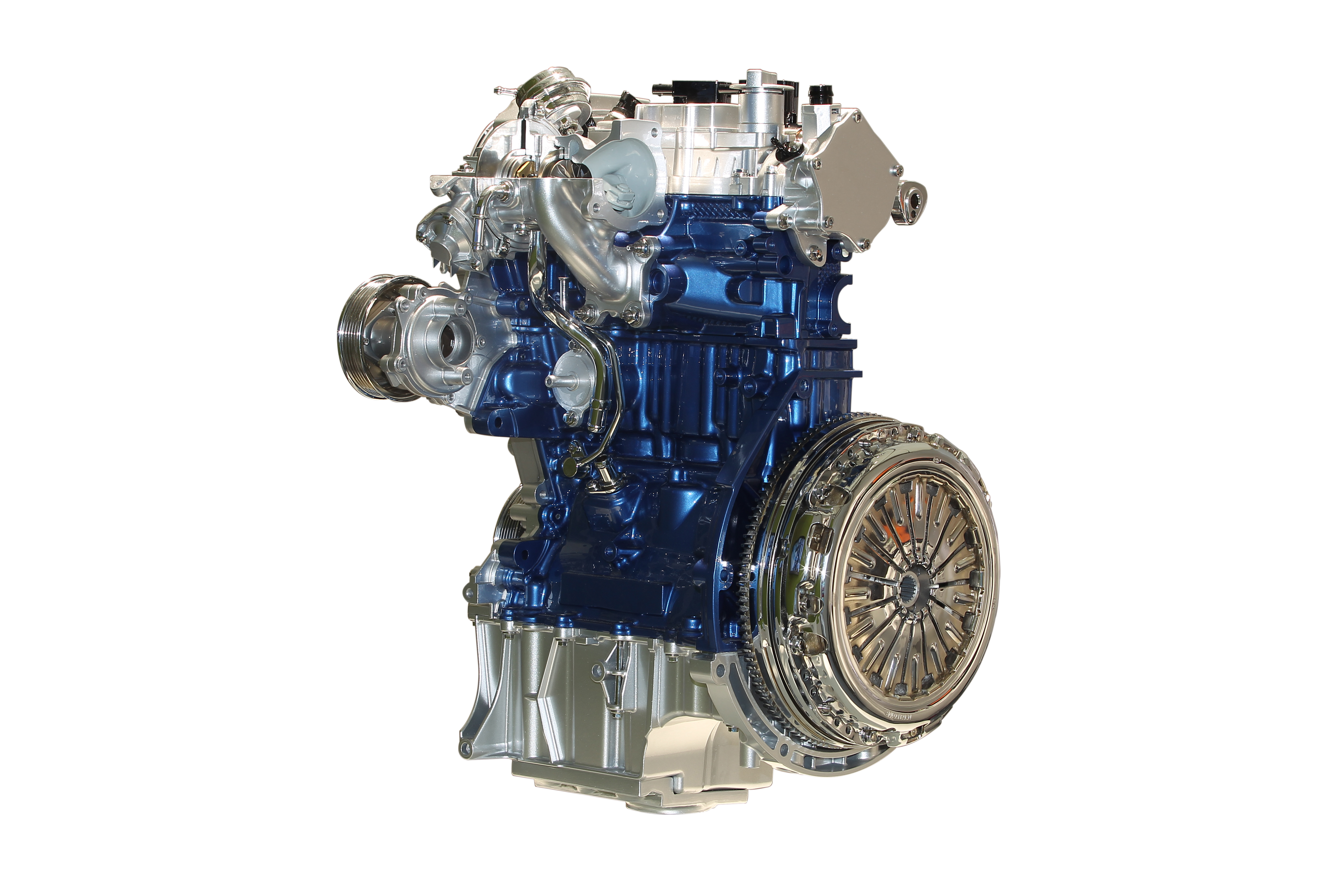 This is a 1.0L Ford EcoBoost engine. The 1.0L displacement is an example of OEMs opting for smaller engines with turbochargers to meet increasingly stringent emission standards.

In 2009, a 3.5 liter twin turbocharged V6 engine was offered as an option in the Ford F-150. It was badged with the name EcoBoost and has since been a strong competitor in terms of torque and horsepower for a full sized truck. While originally making its debut overseas, this engine developed by Ford Motor Company has been a strong competitor in the American automobile industry. The EcoBoost name was derived from “ECO” meaning fewer greenhouse gases and “BOOST” from the use of a turbocharger. A concept design based on internal engine modifications along with the use of turbocharging that would deliver more horsepower and torque than that of a larger displacement engine. The primary focus was big power with more fuel efficiency and less emissions.

The EcoBoost name has been around for almost eight years in the United States and the EcoBoost engine family has continued to grow. There are several different versions and displacements depending on which vehicle it is designed for. EcoBoost is now a common name that has found its way from Ford’s compact car line all the way up to the Raptor pickup.

While the EcoBoost name is becoming a highly recognized power plant, the internal components are often overlooked or not understood. The complexity and lack of understanding often warrants taking the vehicle back to the dealership for repairs rather than an independent garage.

The premise of the engine is still based on all of the aspects of a modern four stroke internal combustion design. There are two primary systems of the engine that contribute to the increase in power and decrease of emissions.

The first system is Gasoline Direct Injection (GDI). While the fundamentals of GDI have been around for years, the concept has only started to be more accepted as an alternative method of fuel injection.

Fuel injection has been around for quite some time and has taken many forms since its inception. Looking back, most of us can remember that the first systems were TBI (Throttle Body Injection). Later on, a better concept was introduced called Multiport Fuel Injection (MPFI). These systems did fine, even though they may have had some drawbacks, but they were both based on the concept of introducing fuel into the intake air stream. When the intake valve opened, the fuel air mixture would be pulled into the cylinder. While these types of injection were better to control than the carburetor, they still lacked efficiency for better combustion.

The high-pressure rail has individual hard lines that carry the pressurized fuel to the fuel injector. The fuel injector tip is placed into the cylinder head inside the combustion chamber. The injector, being controlled by the PCM, sprays the needed amount of fuel into the combustion chamber at the appropriate time so the fuel can properly combust.

For the 2015 MY F-150, Ford unveiled the smaller V6 Ecoboost 2.7-liter engine. The engine produced 325 horsepower and 375 lb.-ft. of torque. It was produced with an aluminum cylinder block and heads for further weight reduction with the aluminum body trucks.

The cylinder head combustion chamber is bowl-shaped and very similar to other four valve per cylinder heads. The biggest difference is that the spark plug is located directly in the middle of the combustion chamber and the injector tip comes in from the side. The piston shape is an inverted dome with valve reliefs but has a small cup in the center of the piston. When the injector fires, the high pressure fuel enters the combustion chamber and the fuel is directed toward the bowl-shaped cup. With the spark plug mounted directly above it the mixture is compressed and then ignited.

The mixture kind of gets pushed to one side or the other creating an uneven burn when the mixture is ignited. With fuel being directed into the spoon-shaped combustion chamber the mixture is held in the center of the piston for better flame travel and distribution.

The major key to the fuel air mixture is when it is allowed into the combustion chamber. On typical fuel injection systems, the injector needs to be properly timed so fuel could pass through the intake tract and through the cylinder head and then around the valve for proper combustion.

Now with the EcoBoost, high pressure fuel stands waiting to be delivered directly into the combustion chamber with no limitations. Just like a diesel, fuel can also be injected multiple times through the combustion cycle for maximum efficiency. There have been countless hours in design and testing of the combustion chamber and piston shape for proper ignition and flame travel. One of the major challenges relating to this type of fuel injection was when to fire the injector. With no delay in the fuel charge reaching the cylinder head, when was the appropriate time to fire the injector?

The second system contributing to the power of this engine was the use of a turbocharger. All EcoBoost engines utilize a turbocharger to increase power and efficiency to that of a larger, naturally aspirated engine. Utilizing a turbo for an engine can have limitless combinations of power output. Having different size turbine wheels or compressor wheels can have an effect on where power is produced. Some combinations can create a lot of turbo lag on the bottom end while making big power on the top end while other combinations may create power on the bottom end and become out of breathe on the top end. So there was extensive research on turbo design to produce power throughout the entire RPM range.

The 1.0-liter, 1.5-liter, 2.0-liter, and 2.3-liter engines use a single turbo. The 2.7-liter and 3.5-liter V6 engines use two turbos, one driven from each cylinder bank. Single scroll turbos are reliable and durable but do have their limitations.

To help with turbo lag in single turbo applications, the twin-scroll turbo provides a way to spin the turbo in relation to cylinder pulses. The turbine housing is divided into two sections. Each section feeds the turbo from corresponding cylinders. Take for example a four cylinder engine. Typical firing order would be 1, 4, 3 and 2. Cylinders 1 and 4 would feed one scroll while cylinders 3 and 2 would feed the other. Layout of the exhaust manifold design would be to have the cylinders split into the appropriate scroll based on the firing order of the engine. This theory of twin-scroll directs more energy to the turbine wheel providing a wide range of effective boost and more valve overlap without hurting exhaust scavenging.

Twin-scroll systems require a specific exhaust system layout for engine application and can be more expensive to use due to the design complexity of the turbo. At this time, there have been some upgrades to the 2.7-liter and 3.5-liter engines with the turbo system but it has not been confirmed if twin-scroll has been utilized. With cylinder layout of a “V” engine, it seems as though a twin-scroll system cannot be used.

In a Gasoline Turbo Direct Injection (GTDI) engine, gasoline is carried by a low pressure pump from the tank to a high pressure pump mounted on the cylinder head which is driven by the camshaft. All of the EcoBoost platforms utilize DOHC (Double Overhead Camshaft) relating to four valves per cylinder which are controlled by VCT (Variable Cam Timing). After the gasoline leaves the high pressure pump, it is carried through stainless steel fuel lines under pressures ranging from 65-2150 psi to the injectors. The injectors are placed in the cylinder head so as the tip of the injector is inside the combustion chamber. High pressure fuel enters the combustion chamber when commanded by the PCM.

The engine brings in outside air through the air filter and into the compressor housing of the turbo. As the compressor wheel is spun by the turbine wheel, compressed air is sent to the charge air cooler where it is cooled. Intake air is now under boost and pressurizing the intake manifold so when the intake valves open, compressed air is forced into the combustion chamber. The spark plug fires and pushes the piston down on the powerstroke. The compression ratio of EcoBoost engines is around 10:1 with the exception of the 2.0 liter and 2.3 liter, which is around 9.5:1. At sea level, with 15 psi of boost, the effective compression ratio is around 20:1. Hot expanding exhaust gases are then directed into the exhaust manifold delivered to the turbine wheel of the turbo. A turbocharger compressor wheel can spin at speeds up to 200,000 rpm.

Because there is no manifold vacuum under boost conditions, a mechanical vacuum pump was mounted to the cylinder head and driven by the camshaft. Later, the mechanical pumps were replaced with electric ones which will fail causing lack of functions that used the engine vacuum.

There have been some complaints about black smoke in cold start up conditions. This is considered normal because of the fueling strategy for cold start enrichment. The fuel strategy is rich enough to accommodate cold start but lean enough to get the catalytic converters to operating temperature more quickly. On start up, the injectors spray a small amount of fuel on the down stroke of the intake cycle and then spray again when the piston reaches top dead center. This will cause some amounts of black smoke, but nothing to be alarmed about.

Smaller, more compact engines are becoming a wave of the future. While they are very complex they do offer huge gains in power. Who would have thought that our hotrods would become four cylinders, but I guess that day has come. ν

Ford’s EcoBoost Engine: Big Power with Fuel Efficiency – Opportunity or Challenge for You?