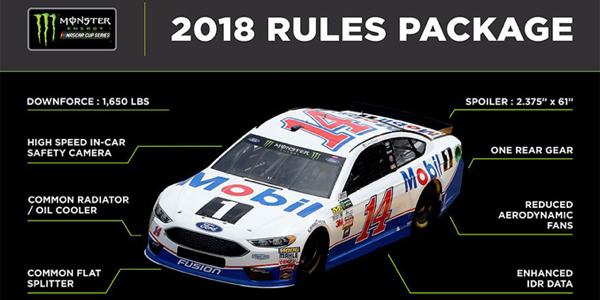 After several seasons of reducing downforce and limiting horsepower, NASCAR’s 2018 rules package won’t take quite as big of a bite out of the aerodynamic platform currently employed by teams competing in the Monster Energy NASCAR Cup Series.

After several seasons of reducing downforce and limiting horsepower, NASCAR’s 2018 rules package won’t take quite as big of a bite out of the aerodynamic platform currently employed by teams competing in the Monster Energy NASCAR Cup Series.

There are changes, but overall the 2018 package, delivered to teams this past week, is more about maintaining the positive momentum from years prior.

“We’ve got some things we would still like to try,” NASCAR Vice President of Innovation and Racing Development Gene Stefanyshyn told NASCAR.com. “But let them settle down and then we can talk about what we will do for ’19.”

Chief among the handful of changes on the aerodynamic and technical front are the use of a common flat splitter and radiator/oil cooler for 2018.

The radiator/oil cooler move is something that is already in play at superspeedways. The common splitter, meanwhile, will be new for all venues.

“As we do that, some of the downforce will be removed from the car, so we will see a rearward shift in the balance of the car,” he said. “We estimate somewhere between two to two-and-a-half percentage points backward (approximately 100-120 pounds of downforce). So there will be an aerodynamic change. For that reason, we’ve decided to kind of leave things as they are because that will be something that teams will need to deal with. That’s basically the big thing on the non-superspeedway tracks as far as the aero package is concerned.”

New for superspeedways (Daytona and Talladega) next season will be the elimination of the current ride height rule, a move that should provide safety and perhaps competition benefits.

Tests conducted in the wind tunnel and on the track have verified what NASCAR officials were looking for prior to making the ride height move.

“In doing so we make a significant advancement in liftoff speed,” Stefanyshyn said. “Somewhere in the order of 30 mph; very, very significant.

“As we do that — we’ve had superspeedway specific shock absorbers and springs in the rear of the car. We can now do away with those and just use what we’ve got for the other tracks. It kind of brings all the packages together.”

Part of the reason for a limited number of rule changes can be linked to an evolution in the inspection process that will roll out next season.

The camera-based system which scans the car will replace current grid, module and Laser Inspection Station portions of the inspection process. Engine, chassis and safety inspection stations will remain in place.

“As we move to the next generation at-track inspection we’ve had engagement with the teams,” Stefanyshyn said. “What do we officiate, to what kind of tolerance? The teams and OEMs have given us a lot of input. They want us to bring that in tighter. As we do that there will be some more aerodynamics that will come off the car.”

In addition to the 100-120 pounds that will be gone with the common radiator and splitter changes, another 150 or so “is coming off due to the new officiating process and the tolerances we’ve agreed to,” he said.

“When you look at it you say you don’t see a lot physically different with the car, but those two element themselves are a fairly significant change, which was another reason we decided just to kind of hold where we are.”

Engine rule changes for ’18 were announced earlier this year. They include use of a sealed short-block engine for a minimum of 13 races; use of a long-block engine in the Clash and All-Star Race, the series’ two non-points events; and a single-engine rule for all races.

On the safety front, Stefanyshyn said incident data recorders will be powered by batteries from the vehicles, a move that will allow the IDRs to continuously record instead of recording only upon being triggered by an impact.

“When we run vehicle power, (the IDR) will be looping and we will be able to catch the frames or the information pre-crash which is very, very important as opposed to at-crash start,” he said. “We can actually go back in time and watch as that develops.

“Now we are actually going to have high speed video to be able to tie that exactly and it will give us a much higher understanding of a crash incident, and then being able to put in solutions to improve our situation in crashes. That’s a big step for us.”

The in-car camera will be located to the right of the driver.

The mandatory rollout of the enhanced vehicle chassis (EVC) originally slated for 2018 has been pushed to 2019. All new chassis are still required to certify with EVC beginning Nov. 20, 2017.

“I suspect there will be somewhat of a difference,” Stefanyshyn said. “How each team handles it and figures it out will be interesting.”