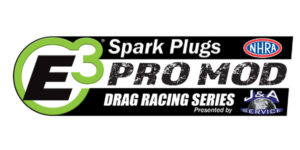 The contingency sponsorship applies to racers using E3 spark plugs and wire sets. Finalists in the Pro Mod class that display the E3 decal and use both E3 products will qualify for $1,000 for the winner and $500 for the runner-up.

“Pro Mod racing is the most exciting form of drag racing today and we couldn’t be happier to lend our support to the fastest-growing series in NHRA racing,” said Rob Fisher, vice president of motorsports for E3 Spark Plugs. “We’ve been involved with NHRA drag racing as a marketing partner for over 10 years, and in our mind this is the next logical step and gives us the opportunity to give back to a division that many acknowledge as the pinnacle of Sportsman drag racing.”

Other changes planned include four qualifying sessions; two on Friday and two on Saturday prior to race day for the slate of 3,000+ HP muscle cars and late-model Mustangs, Camaros and even Cadillacs racing side-by-side in sub-6 second passes at speeds up to 250 mph.

Advertisement
“With turbos, superchargers and nitrous options on the engines, it’s edge of your seat excitement! What could be better than that?” asks Fisher. “For many, Pro Mod racing is reminiscent of what people recall as a more pure form of racing when racers met to pit different cars and powerplants against one another.”

Brad Gerber, NHRA’s vice president and chief development officer, said, “E3 has long had an impressive history of supporting professional and grassroots motorsports, so we are very excited to have their support this year for our Pro Modified series and contingency program. Pro Modified continues to change and develop and has some of the most committed and enthusiastic race fans in the country. Like E3, a company that entered the market with an electrode design that threw out the rulebook for ignition technology, E3 continues to innovate and design performance products with a focus on winning championships. Their growing line of race products shows an entrenched commitment to motorsports and Sportsmen level racing.”

Steve Joiner, E3’s vice president of sales and marketing, added, “In the same way Pro Modified has ignited the attention of race fans, E3 is working to exceed expectations and keep innovation front and center in our product development. We are proud of our 10-year sponsorship of NHRA racing and are looking forward to a very exciting season and the final NHRA Toyota Nationals in Las Vegas.”