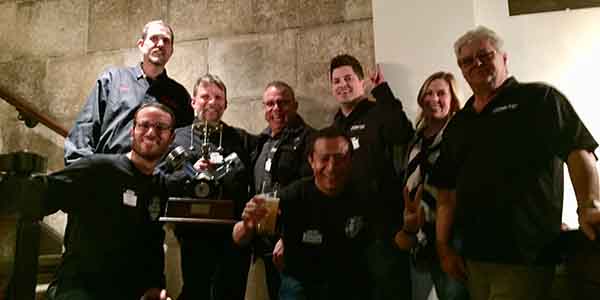 We first met Gregg Dahl of GMS Racing Engines, located in Uniontown, PA, at the 2016 PRI Show. Fast forward a year to the 2017 PRI Show, and we met with Gregg again. This time we were awarding him for his engine, a S&S-Based Harley-Davidson Evolution V-Twin.

We first met Gregg Dahl of GMS Racing Engines, located in Uniontown, PA, at the 2016 PRI Show. Fast forward a year to the 2017 PRI Show, and we met with Gregg again. This time we were awarding him for his engine, a S&S-Based Harley-Davidson Evolution V-Twin, which was voted the 2017 Engine of the Year.

Dahl was presented the award at Engine Builder magazine’s 2017 PRI Party at Rock Bottom Brewery in Indianapolis on December 6. His V-Twin engine made it into the Top 10 most popular Engine of the Week engines from the past year where it was then voted on by Engine Builder readers on our website and social media channels. The Engine of the Week series is sponsored by Cometic Gasket. 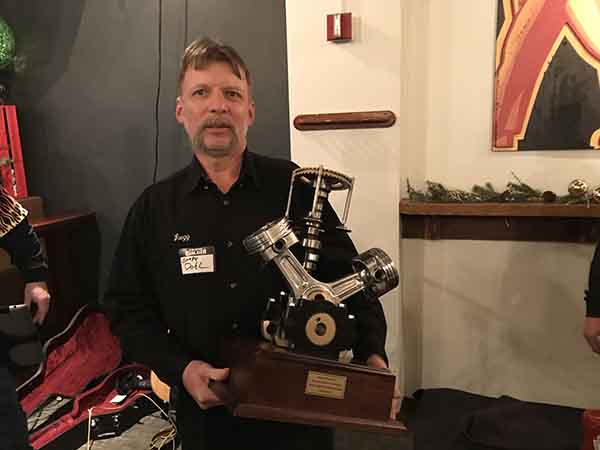 Gregg Dahl hoists the Engine of the Year trophy built by Ray Banyas of Victory Engines in Cleveland.

The contest was neck and neck between Gregg’s V-Twin and Jon Kaase Racing Engines’ Boss Nine. But in the end, after more than 800 votes, the V-Twin came out on top, earning Gregg Engine of the Year honors and a custom trophy built by Ray Banyas of Victory Engines in Cleveland. 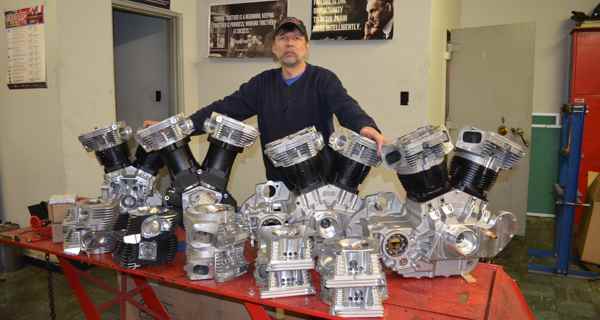 The engine highlighted in this week’s Engine of the Week was built for a customer up around the Toronto, Canada area. The engine is a S&S-based Harley-Davidson Evolution V-Twin, and is going to be in a Fast Bracket Race drag bike.

To start, Dahl used basic cases from the S&S 145 tribute motor from about 10 years ago. “We had to do some work inside the case to get the big stroke to clear so the rods would clear,” he says. “All of the parts are all hand massaged to fit together. In the heads we put a 2.300 and a 1.800 exhaust valve. Being that the RPMs of the engine will be shifted around 6,800 – 7,000, if that far, we don’t have to run killer valve springs because of the real stiff valve train parts we have. Valve spring pressure will be around 275-300 on the seat and about 800 open.”

GMS Racing Engines did a lot of machining on the heads since those came from S&S as unfinished castings. This is also a flattop piston engine because of the 151 cu. in. size. 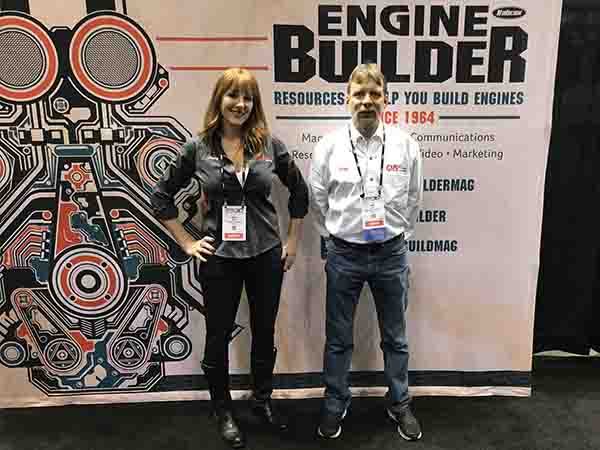 When GMS gets the cylinders for the engine from Axtell, those are also not finished. Dahl finishes those here at the shop.

“We have our own torque plates that we made up and we use the actual fasteners in the torque plate that will go in the motor, and we use gaskets with them,” he says.

That’s not all he does on this engine. There’s some breather timing that Dahl does where he machines or grinds the window that the rotary breather gear runs in to get the breather timing correct. He also degrees the cam and scoots the drive gear around on the cam to get the timing where he wants it before welding the timing gear to the cam so it doesn’t move. He also trues up the flywheels.

“We also had to do some work for valve clearance,” he says. “Being that we are trying to achieve this compression with a flat piston, there was a lot of piston machining. We had to make the valve reliefs a little bigger but not deeper. We had to cut the rear piston for the front piston to go through it at the bottom of the stroke. The pistons are gas ported and we run light-tension rings.” 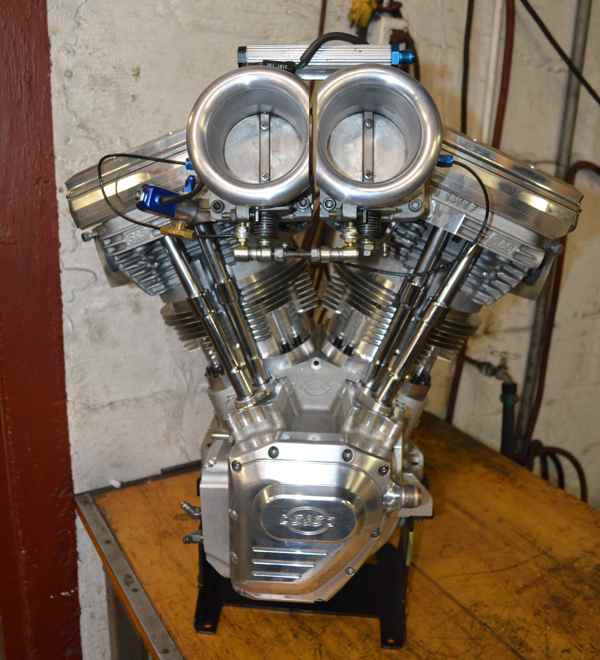 This Evo engine has a 4-3/8″ bore and a 5-inch stroke, and has a laundry list of top-quality parts involved. The Red Shift 715 cam closes the intake at 71 degrees at .053” lift. It has S&S special application engine cases. It has a S&S billet HVHP (high volume high pressure) oil pump. It has a set of GMS’s own proprietary lifters, which are modified from Hylift Johnson. The cylinders are finless ductile iron from Axtell. The pistons are from JE. The heads are S&S B2’s that GMS custom finishes. The shop used Pac springs and the engine also has Victory 1 valves and all the valve train hardware is Victory 1. 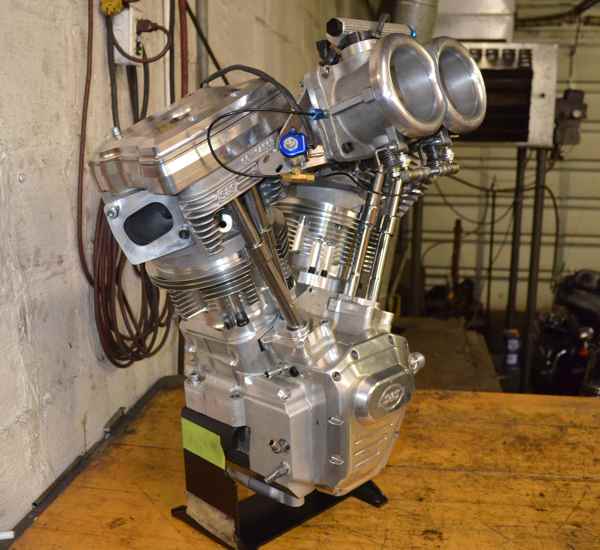 “We use Smith Brothers push rods, which are really cool because they are adjustable and are 7/16″ tapered down to 3/8″,” Dahl says. “They’ve got to be real stiff because they are 12-inches long. We use S&S billet rocker boxes and our own GMS 4.140 chrome moly rocker stands. We use rocker arms from either S&S or R&R Cycle. We send all the valve train out to Hekimian Racing Engines for cryogenics.”

GMS uses Cometic gaskets on all its engine builds, and this Evo is no different featuring Cometic on the head and base gaskets. 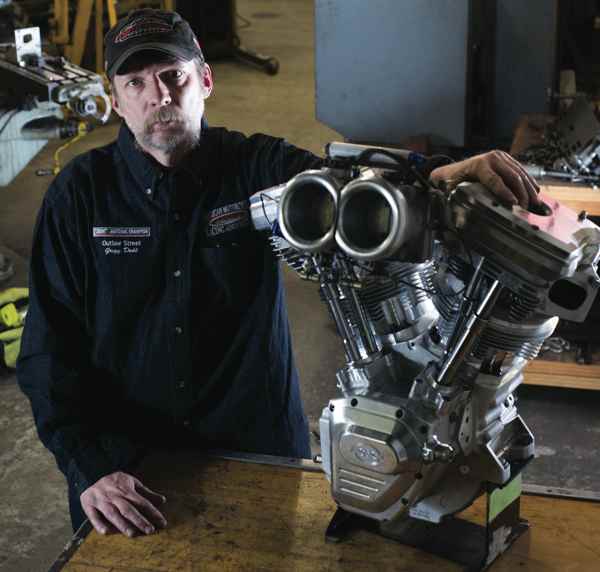 The Evo got Cometic’s MLS gaskets and has ARP fasteners throughout. The engine has S&S 5-inch stroke flywheels in it and S&S 8.5-inch aluminum connecting rods. It also has a single S&S Super D carburetor on it.

This Evo V-Twin engine is very similar to the ones Dahl and GMS build for their drag bikes, which boast a 15:1 compression ratio and 260hp at the rear wheel. It should be one heck of a bike engine!