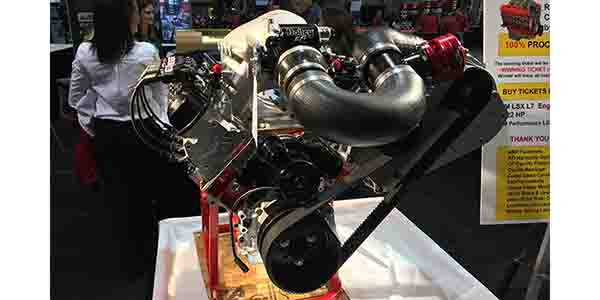 Engine of the Week returns in 2018 with a special 454 cid Procharged LSX engine built by Patterson-Elite Performance for Sunnen’s Charity Engine Sweepstakes for Victory Junction. The 1,300 hp LSX helped raise tens of thousands of dollars for a good cause.

Exactly a year ago, we started our Engine of the Week series sponsored by Cometic Gasket. We set out with the aim of featuring 52 engines built by 52 different engine builders from across the country. Based on the fact that you are reading another Engine of the Week article, now in it’s second year, I’d say it was a success. 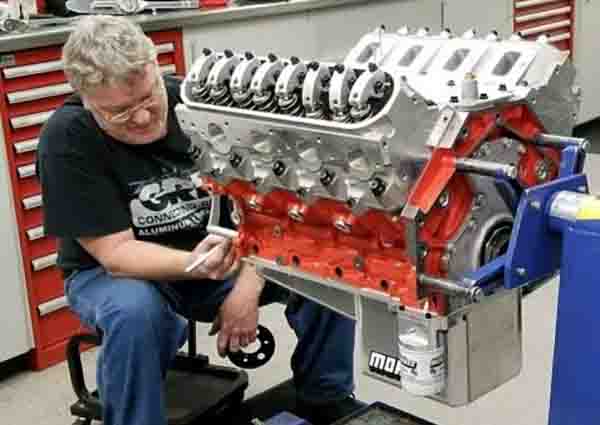 In 2017, we kicked off the engine articles with a 454 cid LSX DR engine built by Patterson-Elite Performance for Sunnen’s Charity Engine Sweepstakes at the PRI Show to benefit Victory Junction. In honor of that first engine, we are kicking off 2018 the same way.

Patterson-Elite Performance, located in Augusta, KS, was called on again by Sunnen to build another engine for the annual Charity Sweepstakes at PRI in Indianapolis. This time, Patterson-Elite delivered a 454 cid Procharged LSX engine in an effort to up the ante from last year.

Engine Builder magazine caught up with Cory Mattson of Patterson-Elite Performance to get the details of this ‘All-in-the-name-of-charity’ engine. 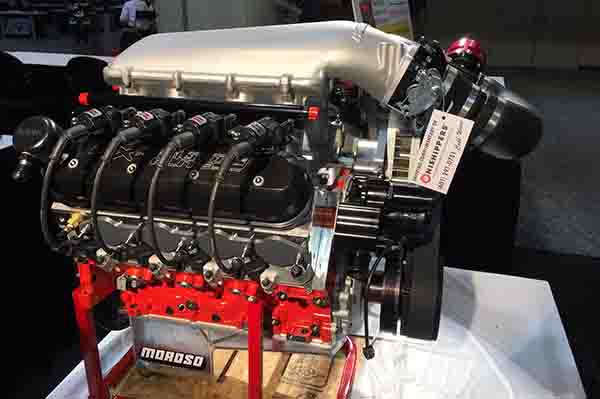 “Last year, with that engine we did, I think we did $43,000 in ticket sales, which we felt was great,” says Mattson, shop foreman for Patterson-Elite Performance. “We wanted to be able to do something this year that would hopefully increase that number. Sunnen approached Nick [Ferri] and Todd [Patterson] again this year about doing it and they were both on board with doing another engine this year for Victory Junction. We all put our heads together and came up with an initial plan of building another 454 cid motor, but changing it up a little bit.” 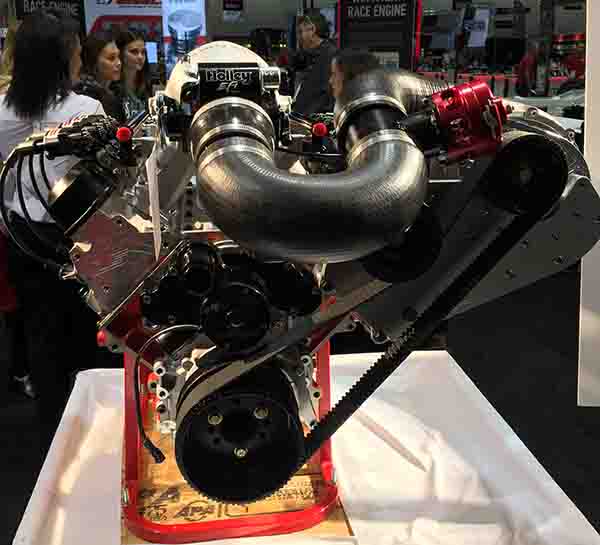 Midway through the design process, the idea to put a supercharger on the LSX engine came about. Procharger, located in Lenexa, KS, is just 100 miles from Patterson-Elite’s shop, and so it was a no brainer for the shop to contact them and they were onboard to help out.

Since this engine gets raffled off for charity at the PRI Show, plenty of supporting companies willingly chipped in parts for the build, which is based on a LSX block and LSX LS7 heads from Jegs. Other parts include: ARP bolts and fasteners; an ATI harmonic damper and flexplate; CP-Carrillo pistons and rods; Clevite rod and main bearings; a COMP Cams camshaft, timing chain and front cover; a Holley intake manifold, ECU, injectors and throttle body; Jesel valve train, rocker arm and roller lifters; Manley spring locators; a Melling oil pump; a Meziere water pump; a Moroso oil pan; PAC retainers and locks; Pertronix coils and wires; a Procharger F1-X supercharger kit; PSI DR 427 RML valve springs; Trend pushrods; and a Winberg crankshaft. 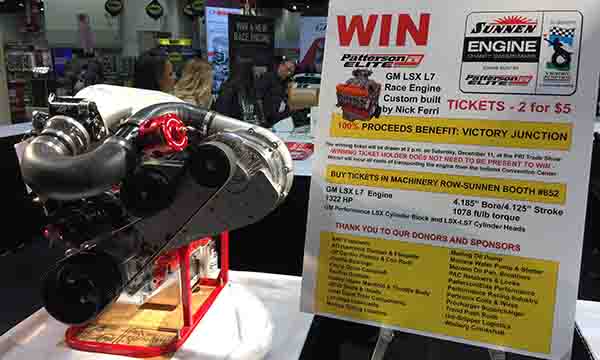 All the help was much appreciated, but that didn’t mean the build went without a few issues needing to be resolved.

“One of the issues that we’ve seen with the supercharged engines on our COPO program is the need for a Torrington thrust bearing,” Mattson says. “That’s one of the things we did that’s not a common deal for everybody else. We put a Torrington thrust bearing on the front of the crankshaft to alleviate the stress on the babbit bearing, and we had to do the same thing on this motor to alleviate or try to nip any problems that might arise in the bud before they actually became a problem.” 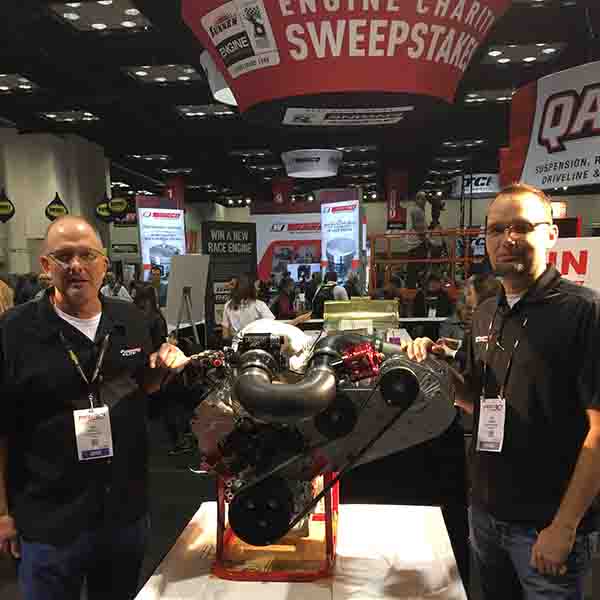 Todd Patterson (left) and Cory Mattson (right) next to the 454 Procharged LSX in Indianapolis at PRI.

With the 4.125˝ stroke, the shop also had to adjust clearances to make sure they cleared the rod bolts and that the skirts of the pistons cleared the counterweights of the crankshaft.

“One of the other things we did with the Jesel rocker arm system, since we changed from a pedestal mount rocker arm to a shaft mount rocker arm, it required some machining on the cylinder head,” he says. “We basically removed the stock pedestals and created a flat surface for the Jesel rocker bar to mount to and then bolted that and machined all that to adapt the rocker bar to the LSX head.” 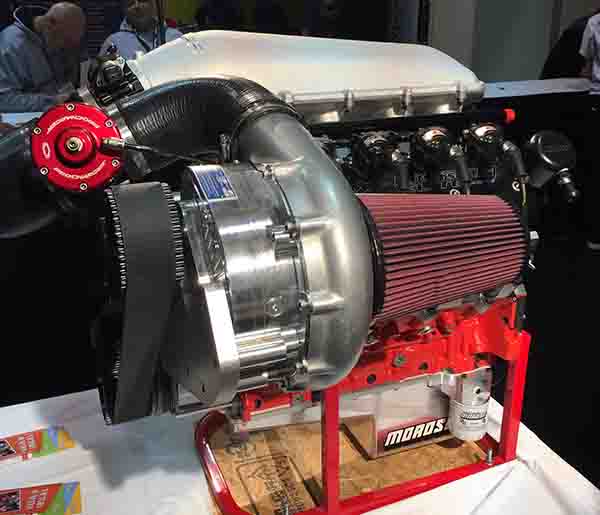 The block had work done to it as well. Patterson-Elite bored it to 4.185˝, squared the decks to a height of 9.420˝ and honed it on a Sunnen SV-20 Diamond hone in Nick Ferri’s Elite Motorsport shop in Wynnewood, OK.

“We used ARP main studs and ARP fasteners in it,” Mattson says. “We flat milled the heads to get the compression ratio to the point that we wanted it at about 10.5:1. We also had to do some minor push rod clearancing on the cylinder heads.” 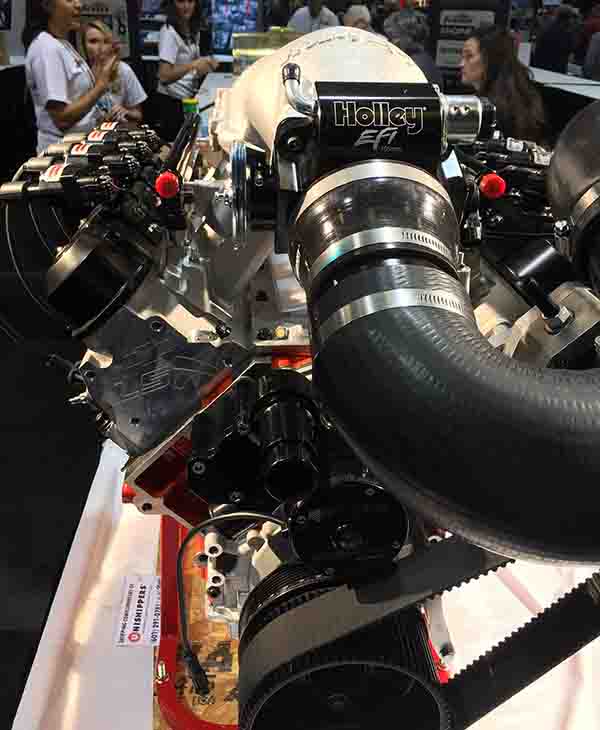 Once all the work was done, the LSX got put on the dyno before being shipped to Indianapolis for display. 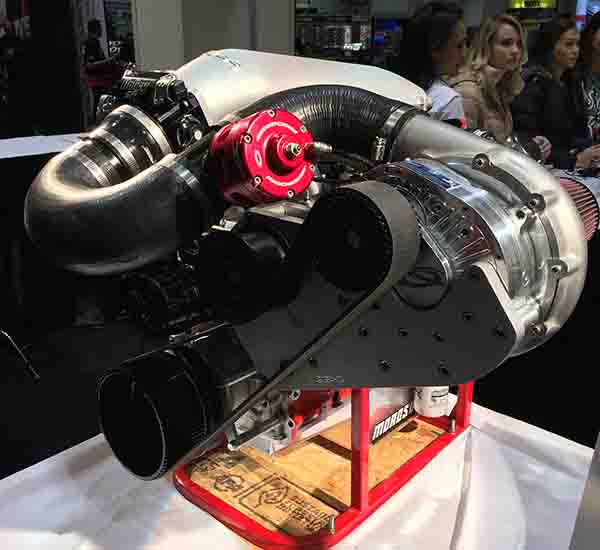 Mattson also said that the shop plans to change the pulley so that it will have about 16 to 17 lbs. of boost at 7,000 rpm, and is adding an intercooler to the system to help it make even more power.

What made this engine really special, however, was the F1-X supercharger kit from Procharger. It was the first time Patterson-Elite Performance used one on one of its engines. 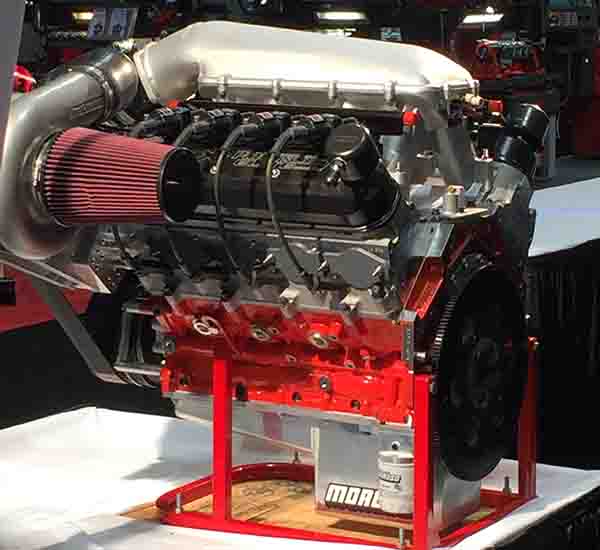 “We’re really impressed with the Procharger,” he says. “Our supercharger experience is basically with the COPOs and the Whipple that they have on those. The Procharger has tremendous capabilities and we’re excited to do something else in the future as far as building another Procharged motor for drag racing in NHRA.”

Since this 454 cid Procharged LSX wasn’t built for a specific class, the engine could be used for a number of applications, according to Mattson. It could even be a 1,300 hp street engine. 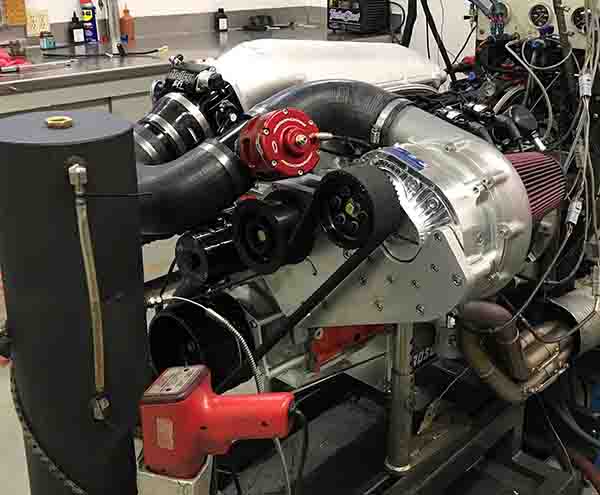 “It could be a street engine if someone chose to make it a street engine,” he says. “It’s really up to anybody’s imagination how they want to use that thing. It wasn’t built with a specific class in mind. When we built that thing we just wanted to build a cool combination that helped us learn some new technologies at the same time. The idea was to help out a great cause and think outside the box a little bit for our program.

“Everybody in here is pretty much a naturally aspirated guy working on NHRA, Stock and Super Stock, Comp Eliminator and some Circle Track stuff. This engine let us play around with some technology that we don’t get to see very often.” 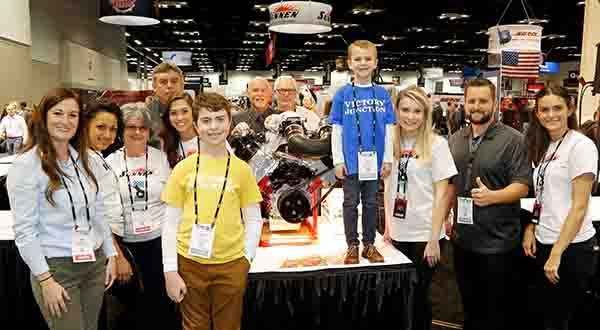 Members of Sunnen and Victory Junction around the engine as it was being raffled off.

At the end of the 2017 PRI Show, Sunnen’s Charity Engine Sweepstakes raised $50,000 for Victory Junction, bettering last year’s number by a few thousand. The lucky name drawn from the ticket barrel was Ryan Anderson from Son Uva Digger Monster Truck.

“Every one of us here at the shop has kids,” Mattson says. “It means a lot to us to be able to help out a charity that helps kids in a time of need. That’s something we’re all on board with here. 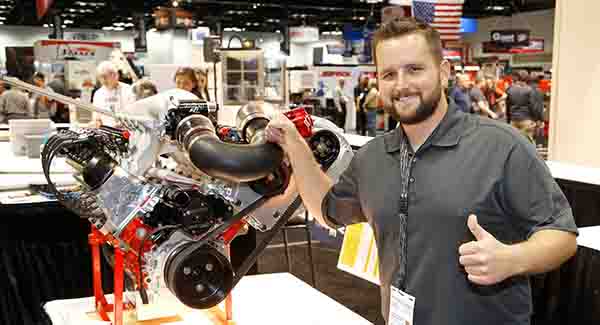 Last year, we raised $43,000 in ticket sales. We wanted to be able to do something this year that would increase that number. It looks like we’ve done about $7,000 dollars more this year than we did last year. That just makes it all that much better that we’ve raise over $90,000 the last two years for that charity. To be a part of that is pretty awesome.”

The 454 cid Procharged LSX is estimated at $60,000 dollars for the work and parts involved. 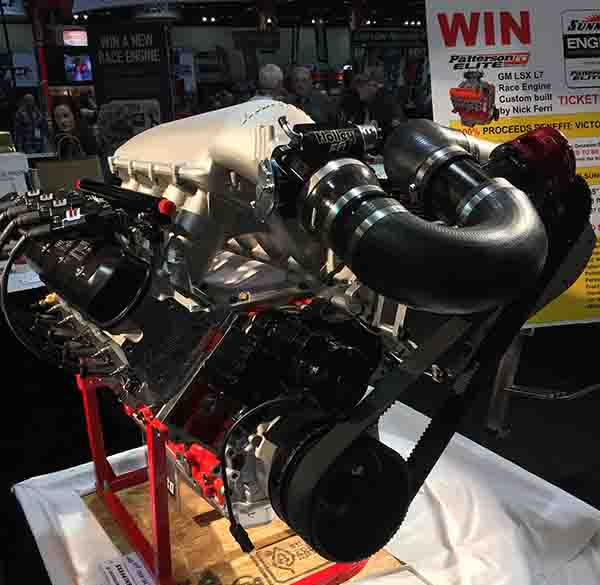